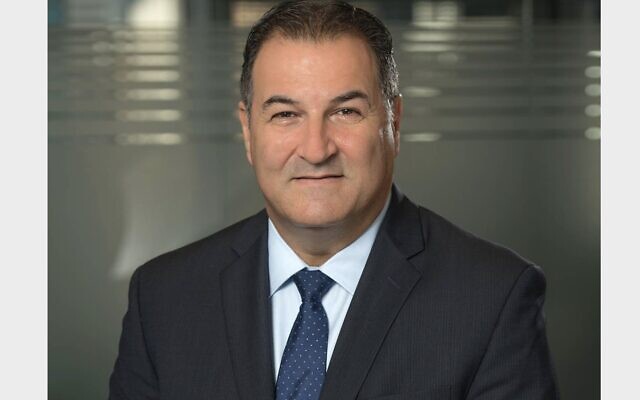 For Israel Maimon, the work of the Development Corporation for Israel – widely known as Israel Bonds — is more about spreading Zionism and defending the state of Israel than it is about selling a piece of paper.

“Israel is at the center of my heart,” said Maimon, who is leaving the president and CEO post this month after five years heading the international organization. “One of our biggest accomplishments is that we are putting a focus on increasing the number of purchasers — we are molding more individuals to support the state of Israel, whether it’s through $36 online or $2 million.”

Maimon knows first-hand what it means to support the Jewish state.

Before leading Israel Bonds, Maimon served as government secretary to Prime Ministers Ariel Sharon and Ehud Olmert from 2003 to 2007 and played a central role in one of the most pivotal moments in Israel’s history: the 2007 bombing of Syria’s nuclear reactor.

He also chaired the Israeli Presidential Conference Steering Committee under President Shimon Peres from 2008 to 2013. Going back even further, Maimon served as a company commander in the Golani Brigade, holding the rank of major. He later worked as a lawyer and in the private sector.

Working under Sharon, though, Maimon said, gave him a better understanding of the “vast picture … of the expansion of the Jewish people.” That was something he came to know about the Jewish diaspora very well while serving Israel Bonds in the United States and internationally.

“The diaspora is so dear to me,” Maimon said. “Probably, I will be staying involved in Jewish life … in terms of working in Jewish life, voluntarily.”

Maimon added that his “two legs are well-positioned in Israel” and he hopes to continue working on American and international investment in Israeli society, possibly in technology or high-tech sectors.

“I understand how to represent Israel, the challenges Israel is facing, why it’s important to preserve the state of Israel,” he said. “It gives me a great opportunity to use what I gained here with the investors and connected people who want to invest in our homeland.”

Maimon’s time at the helm of Israel Bonds speaks volumes about the excitement and desire to invest in Israel through bonds.

During his five years as president and CEO, Maimon oversaw more than $6 billion in worldwide investments. When the COVID-19 pandemic hit, Maimon and his team approached Israeli Finance Ministry officials with a detailed plan to increase an already challenging U.S. goal: an increase of $400 million above the original 2020 U.S. goal of $1.1 billion.

The plan was based on four pillars: facilitating reinvestments of matured Israel bonds; reaching out to institutional investors; obtaining additional investments from existing clients; and securing purchases from new clients. Maimon’s team exceeded its heightened goals, raising $1.5 billion in the U.S. and $1.8 billion globally, despite having to rescript their narrative and work, for the first time, largely virtually.

What Maimon learned from operating Israel Bonds during the era of COVID-19 is a large part of the legacy he leaves to his successor, Dan Naveh, who was named this summer to lead the organization after Maimon’s October departure.

“Even though it’s COVID, visit the Jewish communities,” Maimon said, mimicking his advice to Naveh. “You are the face of Israel, but not only because of that. It also will give you an understanding of Jewish life outside Israel, a look at its richness.”

Maimon stressed that Naveh would need to “get to know and appreciate and advise with your lay leaders.”

At least one of those lay leaders had glowing reviews of Maimon’s time as head of Israel Bonds.

Glen Segal, a long-time Philadelphian who sits on Israel Bonds’ national board, said he “felt real confident to vote to confirm [Maimon in 2016], and I’m more than happy with what he’s done.”

Maimon, Segal said, is “more than just a president with me. He’s also a good friend.”

“If there’s ever anything good going on, he’s the first to call – and he’s always been available to us. He’s been to Philly so many times,” said Segal, who has seen several people lead Israel Bonds during his decades-long board tenure with the group. “All of them were good, but [Maimon] was the best. I’m really going to miss him. He took our organization to new heights – he was terrific.”

Maimon said he’s proud of the “great sense of confidence” investors have in the Jewish state. That’s something he’s taking away from his experience at Israel Bonds.

“They came to see the state of Israel as such an economic success — and they’re part of that success,” he said. “It was really a great, great, great journey.” PJC