Chuck Gordon’s customers didn’t walk a mile in his shoes. They walked millions.

Gordon, a third-generation shoe salesman and former owner of Gordon’s Shoes, sold his business on May 31 to Shoe Fly, another Pennsylvania-based company. The deal preserves jobs for 17 former Gordon’s Shoes employees and ensures a proud legacy, according to Gordon, 72.

Shoe Fly’s owners “have the same family values I do,” he said. “And customers will still be serviced with the same staff they’ve always had.”

The genesis of Gordon’s Shoes dates back 150 years to the 1871 birth of Benjamin Gordon. As he was growing up in Vilna, Lithuania, Benjamin Gordon’s father died, and the family had no means to pay for formal education, so his mother sent him to be trained by a master shoemaker. For more than a decade, the boy impeccably — almost slavishly — learned the trade, according to his son, Herman Gordon, in a 1989 oral history with the Pittsburgh section of the National Council of Jewish Women.

“He could take an animal, and from that animal — the hide — skin it, do everything and make a pair of shoes,” Herman Gordon said.

With the knowledge and ability of a true cordwainer, Benjamin Gordon set out for America. He came to Pittsburgh via Ellis Island and began working in the Hill District in 1885.

According to his son, Benjamin built up a business that eventually became “a cornerstone” in the bustling area.

“Dad was a kind man,” said Herman Gordon. “He never refused anybody who was in poverty or, at the moment, may be unable to buy shoes. If they paid, it was OK. If they didn’t pay, it was OK.” 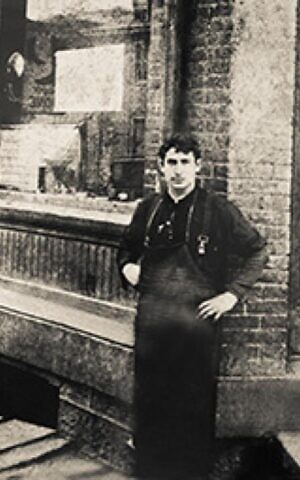 By the time Herman Gordon’s son, Chuck, was born in 1948, Gordon’s Shoes (prior to 2001 the company’s name was Gordon Shoes) was nearly a half-century old and part of the neighborhood fabric. Located at 2200 Centre Avenue and Kirkpatrick Street in the Hill District, the store was a place of fascination for young Chuck, who recalled heading down to its basement and feverishly unpacking cardboard boxes. He wasn’t interested in the Oxfords or leather lace-ups, though, but rather the Buster Brown comics sent along from the Brown Shoe Company. At the age of 7, Chuck Gordon realized he had a treasure.

“I knew if I ran down these rickety steps, I could read something no one else had read yet,” he said.

Growing up, Chuck Gordon, like his father and uncles, worked at the store, and his involvement in the business grew through the years. He officially joined the business full time in 1972, but things had changed by the late 1960s.

In 1968, following the assassination of Martin Luther King Jr. and a series of neighborhood riots, Gordon’s Shoes left the Hill District and moved to Bloomfield where it began “very modestly,” said Chuck Gordon. During the next 30 years, after several renovations and additions, Gordon’s Shoes grew to a 15,000-square-foot space on Liberty Avenue.

“It was quite the place,” Chuck Gordon said. “We had a very strong business there.”

In addition to operating two full-service New Balance stores in Pittsburgh, the company continued evolving. In 2003, Gordon’s Shoes relocated to The Waterfront in Homestead. The move, said Chuck Gordon, was driven by a desire to be near other thriving businesses.

“When The Waterfront was starting to be developed around 2000, the neighborhoods were changing,” he said. “East Liberty and Lawrenceville weren’t like they are.”

Chuck Gordon has fond memories of the Homestead store. What he enjoyed most, he said, were the Gordon’s collected family images displayed there.

“I was always proud of the photos of the family, of my kids,” he said. “It had the history of my family.”

That appreciation for family helped fuel his decision to exit the business.

“As a young man I worked 70-to-80-to-90 hours a week,” he said. “When my sons were playing baseball or football, I missed a lot of those games, and I don’t want to make that mistake with my grandchild.”

Selling Gordon’s Shoes means the name on the shop’s sign will change, but thanks to former staff, new owners and the customers themselves, the legacy will continue, said Chuck Gordon.

“I did my thing, and did the best that I could do,” he said. “We were such a stable institution in the city — 136 years…We didn’t want all of those years of hard work to evaporate and go away.”

“Shoe Fly has the same gold standards and work ethic that we did,” he added. “They are honorable and the kind of people you want to continue your legacy.” PJC