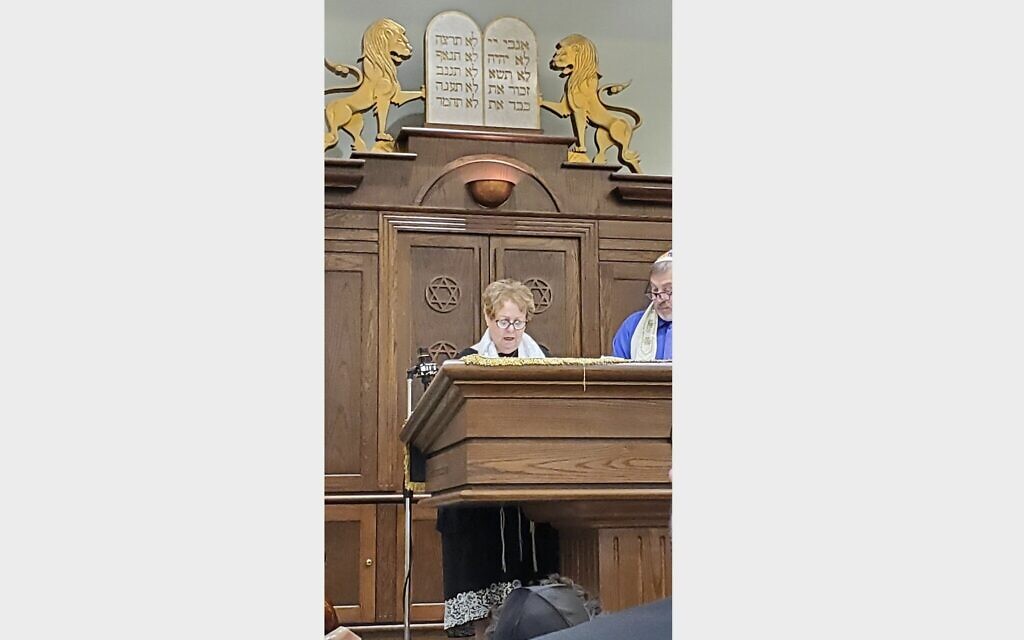 Terri Katzman, despite being an observant Jew, didn’t become a bat mitzvah at 12 or 13.

The Greensburg grandmother, who hails from Kansas City, was called to the bimah and read from the Torah for an assembly of family and well-wishers at Congregation Emanu-El Israel (CEI) last Saturday morning.

Why celebrate becoming a bat mitzvah as a septuagenarian? The answer’s pretty simple.

“I never had one,” Katzman told the Chronicle. “So, the thought has always been there.”

Katzman’s family traveled from Pittsburgh and Philadelphia to observe — and participate in – her bat mitzvah, with other family members coming from places as far flung as Colorado, Texas and Virginia.

A brother from Kansas City who couldn’t make the event participated via Zoom. Katzman’s two grandchildren — ages 8 and 11 — blew a shofar to start the proceedings.

Societal differences a generation or two ago sometimes meant that boys in families studied to become a bar mitzvah, but girls did not. That wasn’t the case with Katzman; she started studying Hebrew in the third or fourth grade. But she never got around to reading her portion of the Torah aloud before family and friends in her synagogue.

Though she admitted she loved studying the meaning of Torah with CEI’s Rabbi Lenny Sarko, Katzman said it was her childhood training in Hebrew that ultimately inspired her to do the reading last weekend.

“The whole process went so smoothly, yes — it was very enjoyable,” said Katzman, who has come to CEI for about 40 years. “The fact that I can read Hebrew made it much easier.”

Sarko said adult bar and bat mitzvahs are increasingly common; Katzman’s was the second he officiated at CEI — and there are more in the pipeline. The rabbi said he has a soft spot for adults seeking a spiritual education, especially the year-long commitment that leads to celebrating becoming a bar or bat mitzvah.

Katzman also isn’t the eldest who Sarko helped ascend the bimah; one congregant who recently marked becoming a bar mitzvah was 88.

“It’s really quite beautiful and quite nice,” the rabbi said. “They bring this maturity and this questioning, and this in-depth view of what Judaism is about.”

“It brings a lot of joy to Terri,” he added. “But, to the entire community, it’s a nice time, a nice life cycle event.”
Katzman agreed.

“The whole experience has been wonderful because my family was around and part of it,” she said. “And it’s also just a real sense of community, which is what it’s supposed to be.”

The Katzmans also marked the special weekend by preparing an oneg for Friday’s CEI service. PJC