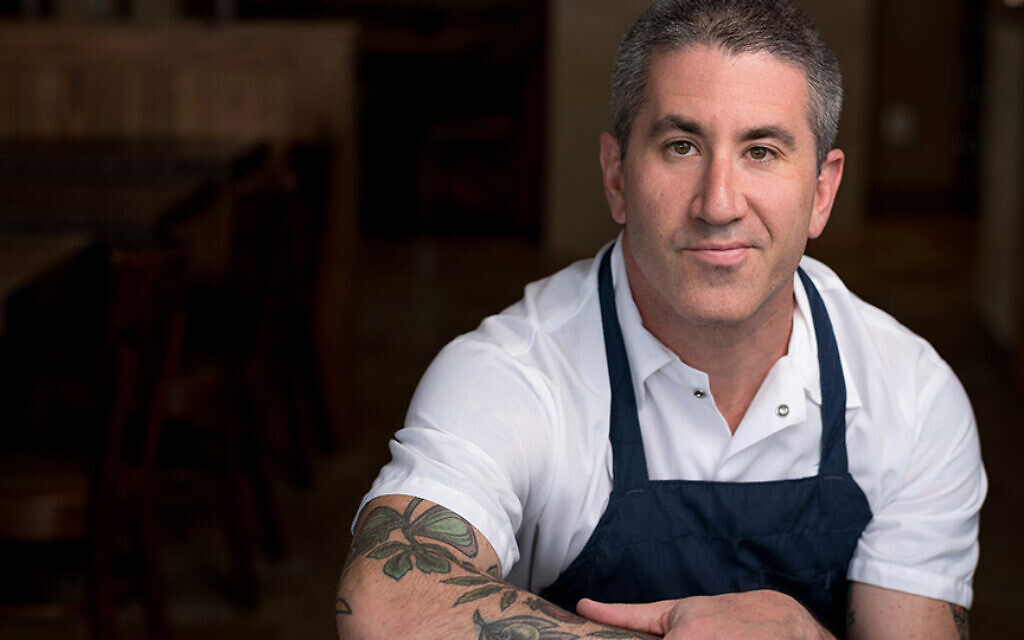 This piece was first published on Jewish Insider.

When reservations went live on Thursday for Michael Solomonov’s first restaurant to open outside of Philadelphia, the first several days of spots were gone within minutes.

It’s a fitting welcome to Brooklyn for the chef who introduced modern Israeli cuisine to American diners with his perennially popular Zahav, which opened in Philadelphia in 2008. Fourteen years later, reservations at the Philadelphia hotspot — which open between 30 and 60 days before the reservation date — are almost always snatched up in five minutes or less.

Fans of Zahav may be disappointed to learn that there are no plans in the works for a Zahav 2.0, in New York or elsewhere. Instead, they’ll have to learn to love Laser Wolf, a more casual restaurant that serves “salatim and hummus and fresh pita, and just a bunch of stuff cooked really right over charcoal,” Solomonov told Jewish Insider in an interview Wednesday.

Solomonov calls it a shipudia, the Hebrew word for a grill that specializes in skewers and offers unlimited salads with the cost of the meat. Laser Wolf’s Philadelphia menu features lamb merguez, barbecue short rib and chicken, as well as fish options like tuna and Spanish mackerel, and several vegetable skewers. The name is a play on Lazar Wolf, the butcher in “Fiddler on the Roof.”

Opening the last weekend of April, Laser Wolf Brooklyn is located in the Williamsburg outpost of the Hoxton Hotel, part of a small boutique hotel chain with several European locations. The restaurant is a collaboration between CookNSolo, the restaurant group owned by Solomonov and business partner Steven Cook, and Boka Restaurant Group, which operates several restaurants in Chicago and Los Angeles.

“It was really the opportunity to work on a project with a group of people that we really love,” said Solomonov, rather than a desire to begin any major expansion outside of Philadelphia. “Over the past 15 years, we’ve had dozens and dozens of opportunities to open Zahav or Laser or other restaurants out of market, and we just didn’t feel like the time was right or the opportunity was right.”

Solomonov, 44, who is Zahav’s head chef, and Cook operate eight restaurants in Philadelphia, most of them offering a spin on Israeli cuisine. Last week, CookNSolo announced a growth equity investment that will take their Federal Donuts outside of Philadelphia as well. The popular local donut and fried chicken chain, which has 11 locations, is poised to expand throughout the Mid-Atlantic, but Solomonov was mum on details.

“It was time to take the next step,” Solomonov said, to bring in partners to grow the popular chain outside the area, to help him and Cook “be the best version of ourselves so we could transport and transmit” the concept.

Even Federal Donuts has a twinge of Solomonov’s signature Israeliness in it. “Za’atar on the chicken would be the closest, probably, to that,” he said. And baharat, a sweet Turkish spice that is now common in Israeli and Palestinian cuisine, is in the donuts’ batter.

Born in Israel but raised in Pittsburgh, Solomonov has incorporated his personal story and that of his family into the Zahav mythology. His award-winning 2015 cookbook, Zahav: A World of Israeli Cooking, features stories behind the family recipes he includes. The publication of that and a second cookbook, “Israeli Soul,” have played a major role in acquainting Americans with some of the more unfamiliar elements of Israeli cuisine.

“Things like schug and harif and shakshuka and babka and even hummus — those are things that, really, I’m incredibly proud to be a part of and this is … we’re marketing a part of the world or people that I think are really sometimes misrepresented,” explained Solomonov.

Countering that misrepresentation of Israel “was a big motivator with opening an Israeli restaurant,” said Solomonov. “Israel in general, I feel like, is very misunderstood, and I think that this representation sometimes is not totally accurate, as it’s usually done from a television screen in the comfort of our own home, and not really being totally in tune with what’s actually happening in Israel.”

As one of the most popular restaurants in the country, Zahav has not faced blowback from anti-Israel activists. Politics haven’t gotten in the way of the restaurant’s several James Beard Awards, including a 2019 win as the nation’s top restaurant. “If you want to make a case against Israel, you can use whatever you want, and I think people will do that,” said Solomonov. “I think, in general, people have been really supportive of Zahav.”

One well-known supporter of the restaurant is Palestinian cookbook author Reem Kassis, who met Solomonov after sending him a copy of her cookbook, The Palestinian Table. The pair hosted an event cooking Palestinian recipes together at Zahav in 2018, and they have since appeared together at multiple public events.

“You see Mike, and you think, ‘He’s the face of Israeli cuisine. He must deny the Palestinian origins of the food he serves. He must be anti-Palestinian, so on and so forth.’ And once you get to know someone on an individual level, you start to realize how many misconceptions you probably hold of that person,” Kassis told NPR in a 2021 interview. She had eaten at the restaurant previously and was surprised that one of the dishes she was served tasted just like her mother’s freekeh recipe.

“Food has been, I think, a bridge. I’m not pretending that, like, we’re going to make challah or shakshuka or I’ll make my grandmother’s bourekas and we’ll grab a guitar and sing ‘Kumbaya’ or anything like that,” said Solomonov. For both Israelis and Palestinians, he added, “​​You humanize this idea, or these people, and I think that’s the right thing to do. I think that that’s the most constructive thing to do, and that is the most productive. So that’s where we stand.” PJC