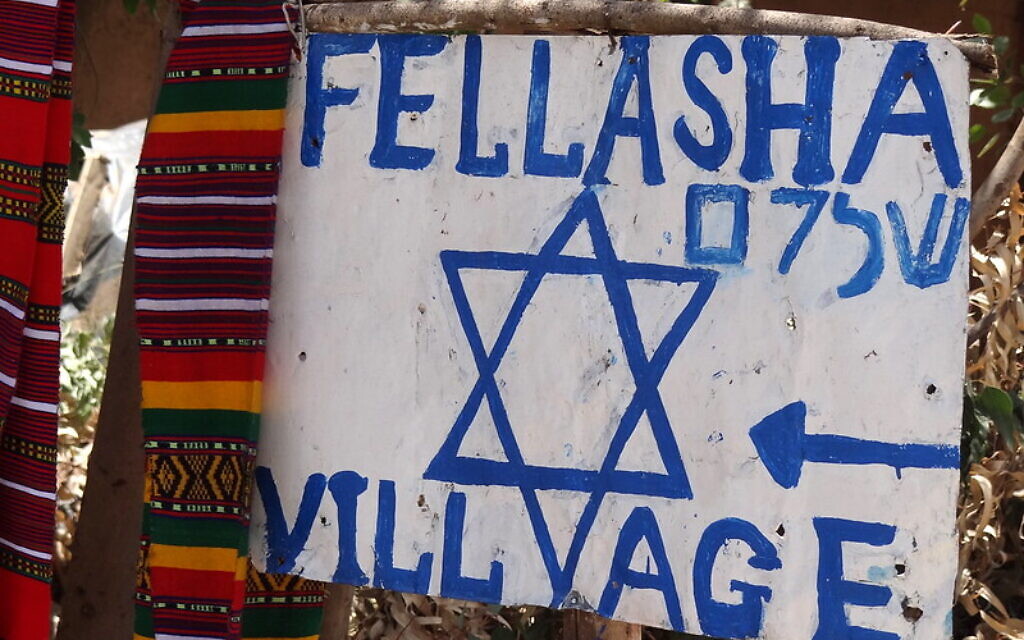 I shouldn’t have been the only white person there. Or, more precisely, one of only a dozen or so non-Ethiopian Israelis among the thousands demonstrating Sunday morning in front of the Prime Minister’s Office, calling upon the government to expedite the immediate aliyah of their relatives still languishing in Addis Ababa and Gondar, some for more than 20 years.

If the efficacy of our demonstrations on behalf of Soviet Jewry had depended on the presence of Jewish Soviets, they’d all still be behind the Iron Curtain.

It wasn’t like that four and five decades ago, when we were rallying in front of Russian embassies around the world, demanding of the Kremlin that it “Let my people go.” If the marches in support of Soviet Jewry had depended on the presence of Jewish Soviets, they’d all still be behind the Iron Curtain.

Yet the throngs of Ethiopian Israelis who came out to protest — many bearing pictures of family members left behind — were, for all intents and purposes, left on their own.

How is it that what should be a Jewish cause par excellence has been reduced to a parochial story of seemingly marginal interest to the Israeli public?

Some background. In 2013, Israel declared that it had fulfilled its historic mission of bringing the entirety of Ethiopian Jewry to Israel. In retrospect, it turns out that that declaration referred only to those whose Jewish lineage was maternal. It did not take into account those of patrilineal descent, nor the thousands whose close relatives were already here but who had inexplicably been abandoned.

Two years later, in response to appeals based on humanitarian considerations, the Israeli government decided that it would allow all those of Jewish ancestry to be brought to Israel if they a) had first degree family in Israel requesting their reunification, b) had arrived in Gondar or Addis Ababa prior to 2010, c) appeared on the community’s membership list, and d) declared their intention to convert to Judaism.

That 2015 decision has yet to be fulfilled, though it included the stipulation that its implementation was to begin within four months and completed within five years. In fact, the first of the new immigrants would only arrive in 2017, and, in the intervening years, only a fraction of those supposedly eligible to make aliyah have actually been allowed to come.

As the Council of Ethiopian Kesim and Rabbis in Israel, the local leadership of the community in Ethiopia, and prominent activists for the cause all estimate that there are another 14,000 who meet the criteria for aliyah already approved, even the recent government resolution to expedite the arrival of an additional 5,000 would leave many more than that still stranded. In addition to which, it appears that no date has yet been set for the beginning of the operation, nor any plan yet in place for its execution. Hence the demonstration. Given the broken promises of past governments, there is understandable — even if not justified — suspicion regarding the reliability of this one. In the meantime, those praying for an airlift to Israel are facing an increasingly volatile security situation as the civil war raging in the country closes in on them, while, of course, also contending daily with abject poverty and serious health issues, exacerbated by the COVID-19 economic fallout.

So why the delay? Clearly there are those in positions of power who do not want them here at all, arguing that it is not Israel’s duty to open its gates to non-Jews, nor is it Israel’s responsibility to shoulder the social and economic burden of absorbing them.

A rather spurious position under the circumstances. Though indeed the prevailing rabbinic opinion is that those awaiting permission to come are for the most part not halachically Jewish, the overwhelming majority of the community’s members maintain a strictly traditional Jewish lifestyle and 95% of them convert under the auspices of Israel’s Chief Rabbinate within a year of their aliyah.

Furthermore, this is no longer an argument that any of us should countenance. It is far too late, and completely irrelevant, to ask if those awaiting aliyah in Gondar and Addis Ababa are Jewish, because what clearly isn’t Jewish is sustaining people’s hopes for 20 years, tearing families apart and then reneging on promises to reunite them out of concern for polluting the Jewish gene pool. An argument, by the way, never raised in regard to the more than half of the immigrants from the FSU who have arrived over the past few years who are also not halachically Jewish and who overwhelmingly do not convert, but who nevertheless are welcomed — as they should be — with open arms.

Besides, anyone not convinced that these Ethiopian immigrants are bona fide Jews even after their conversion need not marry them. As to those who are afraid that 14,000 more mouths to feed and souls to house will break the economy of our 9-million strong Start-up Nation, well, I’d suggest taking a look at the state budget just passed and calculating how very little of the earmarked “coalition funds” it would take to absorb them.

The ongoing procrastination, then, in bringing home the remnants of Ethiopian Jewry should be a cause for profound embarrassment, and their aliyah a cause we should all embrace. This is not a peripheral parochial issue, but a national moral imperative. The plight of those left behind is a blight on an otherwise stellar chapter in the annals of the Zionist enterprise, and it is our collective responsibility to right this wrong — as one. If Israel’s social fabric cannot be woven seamlessly of strands of black and white, it may well unravel altogether. None of us should be prepared to tolerate any longer a situation in which Israel remains in the business of tearing families apart. pjc

David Breakstone recently completed a term as deputy chair of the executive of The Jewish Agency for Israel. This piece first appeared on The Times of Israel.