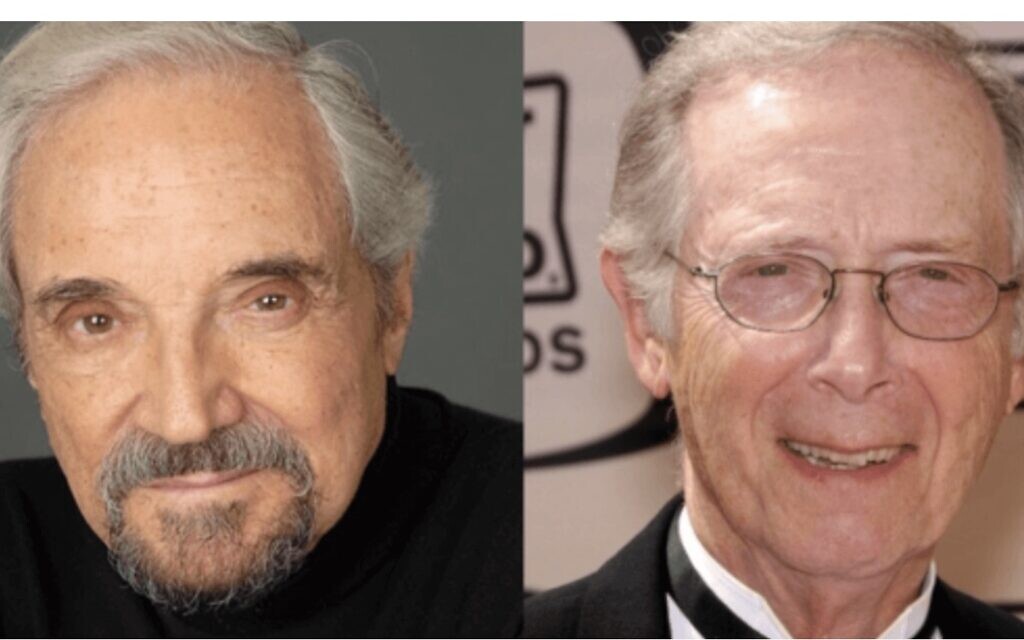 This article was first published by the Forward. Sign up here to get the latest stories from the Forward delivered to you each morning.

“The older I get, the more Jewish I get,” the longtime television producer, comedy writer and, in his more recent years, playwright Ed. Weinberger said. “I do not practice Judaism in any way, except that I am a Jew and know that I am a Jew, and I root for Jews. Obviously, either in embracing it or escaping from it, you’re always a Jew.”

Weinberger (the punctuation after Ed is correct, but more about that later) has called on his Jewish heritage to create an evening of theater — two one-act plays, with the title “Two Jews,Talking.” Each play features two different Jews, all senior citizens, who, well, talk. The plays take place 3,557 years apart.

The first is set on a late Tuesday afternoon in 1505 B.C.E. in the Sinai desert as the freed Jews follow Moses from Egypt to the Promised Land. The second is set now, on a summer afternoon on Long Island.

The plays star two show-business veterans, both Jewish — Hal Linden and Bernie Kopell. Linden, 91, is best known for his seven years as police precinct captain “Barney Miller” on TV. He won a Tony Award as best actor in a musical in 1971 for “The Rothschilds.” Kopell, 89, portrayed Dr. Adam Bricker on “The Love Boat” and has appeared on more than 100 TV series. The Obie-winning director is Dan Wackerman, the artistic director of the Peccadillo Theater Company in New York City. Previews begin Aug. 20, with opening night Aug. 28 off-Broadway at the Theatre at St. Clement’s.

Among his many television credits, Weinberger wrote and was a producer for “The Mary Tyler Moore Show,” and was a co-creator of “Taxi” and “The Cosby Show.” In his more than half-century career, he has won three Golden Globes, a Peabody and nine Emmys. He wrote for the comedians Dick Gregory, Richard Pryor, Johnny Carson and Bob Hope. In recent years, Weinberger penned the one-man play “A Man and His Prostate,” which dealt with his own serious medical adventures and starred Ed Asner.

Weinberger is listed on Wikipedia as 77. “I’m older than that,” he said, on the phone from the West Coast. “But let’s leave that go.Whatever they say I am. But I’m old.” (Another web source would place him in his mid-80s.)
An affirmation of Judaism

His new plays are comedies, but they are about much more than laughter. They are in a sense an affirmation of Judaism, with the second play, the one set on Long Island, especially gradually taking on a more serious, emotionally moving tone. It’s about Judaism and the nature of being Jewish. And the presence or absence of God. And belief. And belief in the face of death and disappointment. And prayer.

“I set out really to make an entertainment,” Weinberger said. “To entertain — that’s been my business. If you’re not doing that, then everything else doesn’t mean anything, at least in my little world. But when I wrote the second play I just wanted to see what would happen if I could write about two Jews and just have them talk about anything at all that occurred to them, and then see how far to the edge they could go.”

“I wondered how far I could go and still make it entertaining. As I wrote I didn’t know where [the two men] were. And as I got further in, I thought, this can’t just be about them on a park bench on Central Park West in the 70s, where I used to live. It had to be something more. And I discovered where they were — which we’re not going to talk about, because I want that to be a reveal — but I didn’t know that until I was toward the end. I said to myself, I have to make this more interesting. I have to give this a little depth. I have to make this about something rather than simply have them go from health to sex to marriage to life — to give it a little bit more meaning.”

From the comic to the dramatic

He took a Shakespeare course in college, and he remembers seeing how the Bard would switch effortlessly from comedy to drama. “I always love the juxtaposition of going from comedy to — I don’t want to call it tragedy [in my play] because I don’t think it’s tragedy, but going from the comic to the dramatic,” and showing “that they can exist together, that an audience will follow you if it’s set up and done correctly.”

He ponders for a moment. “I don’t want to say this is dramatic, but at least we reach another tone altogether.”

The novelist Anthony Marra has said that “comedy has always felt like the most eloquent expression of absurdity, a natural reaction to darkness.” Weinberger agrees.

“I don’t have that eloquence,” he said, “but I certainly would nod yes. It’s a very articulate way, a very literate way of putting it. That would certainly be one definition. I think comedy is always best if it’s about something that’s important. It’s always easy to get laughs about certain subjects, and certain jokes will trigger laughs from an audience. But if you can do something besides that, it makes the work at least for me more important.” It gives the work more “resonance or relevance.”

Tracing his love of comedy

Weinberger grew up in Philadelphia, and traces his love of comedy to early childhood. “It goes back to when I was 6 or 7 years old,” he said, “when I either got my first laugh or I heard somebody laugh at something somebody said. And I said, I like that feeling. You’re getting love. You’re getting approval.”

“I remember always being attracted to comedy. My parents would go to nightclubs and take me — I was an only child —at 12 or 13 years old. And there were comedians there. I was always interested in jokes and comedians.”

But in college, he wanted to be a poet. “I had other aspirations and pretensions. I sent in poems to The New Yorker, and they were quickly rejected or slowly rejected. I wanted to be a professor at Columbia, where I went to school. That wasn’t going to likely happen.” So he left college and began writing comedy.

Where religion fits in

As a child, he was religious. “At a certain point, I became less observant. At one time, around my bar mitzvah years, I was very involved with Judaism. I went to synagogue to pray, I was bar mitzvahed, I went to Hebrew school and all that.”

His father “spent a lot of time at synagogue, in terms of men’s activities, the men’s club. That was a very important part of his life. It’s not like he did tefillin.”

“As I grew older, as I went to college and went to Hollywood, I was not observant. When I had my family and my sons, I wanted them to be bar mitzvahed, and I returned to the synagogue, mostly for them. I wanted them to have the same experience that I had, the cultural experience, the feeling, the awareness that they were Jews, and what that meant.”
That period after the Ed.

And that punctuation in his given name? “That’s an affectation I’m stuck with,” he said. “My name is Edwin. And I grew up in a neighborhood in Philadelphia where there were no Edwins. So I was Ed or Eddie for a while. And when I did my homework — this goes back to the sixth grade — I put E D, and since I was abbreviating, I put a dot after it because that’s what I thought you did with a name, the same way you abbreviated Pennsylvania — P A and then a period. And I kept doing it. I remember when I got my first television credit on the Johnny Carson show, which was my first TV job, and they asked how did I want my name, and I said E D period — all through college I was Ed with a period. Now, if I took it off, people would ask why I’m not ‘dot’ anymore. So I’m stuck with it, and I’m going to have to live with it forever.”

Something else he will live with forever is his staunch defense of the art of comedy.

“Comedy has always been considered less important” — a statement with which this show-business veteran strongly disagrees. “Anybody who writes comedy is always going to say that when done right, comedy is as important as anything.” PJC