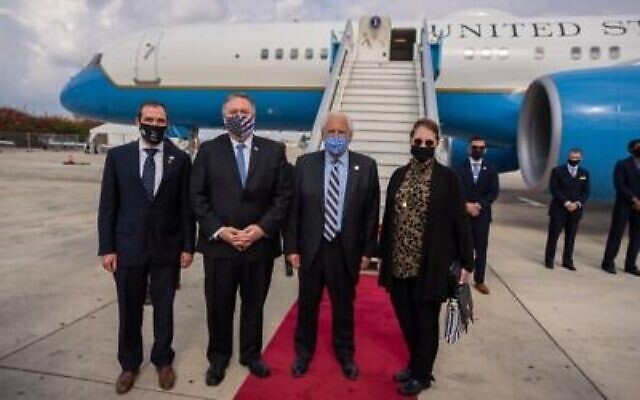 (The Times of Israel) When the United Arab Emirates and Bahrain agreed to formalize their diplomatic ties with Israel last year, the decision came with a gilded signing bonus — a $3 billion fund that would funnel money into private sector-led initiatives meant to foster economic growth and cooperation in the Middle East.

Later, when Sudan and Morocco signaled that they too would establish relations with Israel, the $3 billion of US taxpayer money was opened to them as well.

A statement announcing the fund on October 20 called it “an integral part of the historic peace accord” between Israel and the UAE with the support of the United States.

“It is a manifestation of the new spirit of friendship and cooperation between the three countries, as well their common will to advance the region,” the statement continued.

But less than five months later, the future of the fund is unclear. Conversations with dozens of people reveal that while the fund got off to a quick, if shadowy, start, it has languished with the entrance of the Biden administration. Aryeh Lightstone, a political appointee tapped by former president Donald Trump’s administration to manage the fund, has resigned and no replacement has been named. At the same time, questions have been raised as to the transparency of the fund, headquartered in Israel, and whether it had been politicized.

When the fund was announced, it was arranged as an arm of the US International Development Finance Corp, or DFC, the US government’s development bank, which was set up in 2019 by combining the Overseas Private Investment Corporation with USAID’s Development Credit Authority. (The fund has no relation to the Abraham Fund Initiatives, a Jewish-Arab coexistence group based in Israel.)

More than 250 applications were submitted to the Abraham Fund from October to January, including from private firms and semi-public initiatives in the UAE, Jordan, Bahrain, Egypt and elsewhere in the region. Some were bilateral joint ventures. Fifteen projects were eventually chosen and sent to the DFC in Washington for approval, according to sources.

An Israeli entrepreneur with close connections to former US embassy officials in Israel said the Trump administration had supported the fund while still hoping to win reelection. Once it became clear that Trump would not be holding on to the White House, the bottom fell out of any expectations that the fund would continue to operate, the entrepreneur told The Times of Israel.

Lightstone, who had been a righthand man of former US ambassador to Israel David Friedman, resigned on January 20, the day President Joe Biden took office, as did Adam Boehler, also a political appointee (and former roommate of Trump’s son-in-law Jared Kushner), who had headed the DFC. As of March 1, replacements had yet to be named for either position, nor has the Biden administration named a nominee to replace ambassador David Friedman, who also resigned on January 20.

The lack of appointments likely reflects Washington’s pivot away from the Middle East and lack of enthusiasm for grabbing the Abraham Fund baton, according to sources with knowledge of the situation.

The Prime Minister’s Office declined to comment, but Israeli officials speaking on condition of anonymity said they had the sense that the US was cutting back investments in the region, though they lacked concrete information.

“They have no money for it,” one official said.

Press officers for the DFC, which has continued to work under acting CEO Dev Jagadesan, a career bureaucrat, did not respond to several requests regarding details of the 15 Abraham Fund projects that had been submitted for approval to the agency.

However, The Times of Israel has learned that five of the projects were related to the energy sector, five were tied to food security and five were financing projects.

Projects had been evaluated by Lightstone and his small staff on the basis of whether they would promote US foreign policy goals, could generate a return for U.S. taxpayers and would help host countries turn from recipients into donors, as well as align with the DFC’s economic constraints.

Unlike USAID, the DFC does not give grants but rather extends loans with the expectation of a return on investment. As of September 2020, it had three active projects in Israel totaling $580 million in investments. In 2019, it also committed $480 million to two Egyptian projects regarding the transport of liquid natural gas from Israeli gas fields being developed by Noble Energy.

Dan Katrivas, head of the foreign trade department at the Israel Manufacturers Association, told The Times of Israel that he had tried to figure out how to submit projects to the Abraham Fund immediately after it was announced, but there was no transparency regarding the application process or criteria.

“I tried to contact the fund but it was not clear what their priorities were, what they were going to invest in,” he said. “They did not put out an official website or issue an official call for bids.”

He noted that U.S. transparency rules mean the information will eventually need to come out.

“They have an ethical code and will have to give answers to Congress,” Katrivas said. “But right now, the fact that it’s not clear how it’s run, how the money is going to be invested, and by what criteria, raises all sorts of questions.”

There is still no website for the Abraham Fund, and the website of the DFC, which lists active projects and publishes quarterly reports, only has official figures going up to the end of June. A fiscal year 2021 budget proposal, normally submitted in the spring of the year before, does not include the Abraham Fund.

Among the little information posted on the DFC website about the Abraham Fund is a single press release announcing that Uzbekistan was expanding its partnership with the Abraham Fund.

“Uzbekistan’s commitment of up to $50 million is a testament to the Abraham (Ibrahim) Accords and the fact that improved economic cooperation and connectivity is an objective shared by many, and one that will also bring prosperity to Uzbekistan,” the release reads. It does not include details on the nature of the participation and the reason why Uzbekistan sought to be part of the projects to be financed through the Fund.

An article posted on Entrepeneur.com in November noted that business between Israel and Uzbekistan was ramping up in the wake of the Abraham Accords, listing possible deals for water technology, guns and secretive cyber-espionage systems.

Lightstone played a key role in brokering the agreements between Israel and the Gulf states, according to administration officials, but he remained largely behind the scenes until the waning days of the administration, when he was named special envoy for economic normalization by the State Department on the last day of 2020.

His position, first as Friedman’s chief of staff and later as head of the Abraham Fund, had raised some concerns regarding his close ties to the Trump administration and lack of experience in the development aid world. Some questioned whether it was appropriate for a political appointee to head an arm of the US government’s foreign investment bank, which is normally apolitical.

Lightstone, whose relationship with Friedman goes back to his time as an official with the Orthodox Union, has close ties with Trump’s circle of Jewish advisers. Last year the Orthodox rabbi officiated at the wedding of Trump’s top immigration adviser, Stephen Miller, and Kate Waldman, an aide to vice president Mike Pence, which took place at the Trump International Hotel.

He declined to speak to The Times of Israel on the record, though in a recent interview with the Colorado-based Intermountain Jewish News he appeared to downplay the prospects of the Abraham Fund continuing to operate, instead talking up a women’s economic development forum that was announced days before he quit.

“I hope that whoever isn’t excited about Program A truly believes that Program B will grant a better return to our taxpayers and a more effective way to effectuate peace,” he said.

In November, a Trump administration told JTA that Lightstone is “an on-the-ground guy who gets things done,” and a “rainmaker.”

For now, though, it appears the Abraham Fund’s promises of making money rain down on the region have dried up. PJC