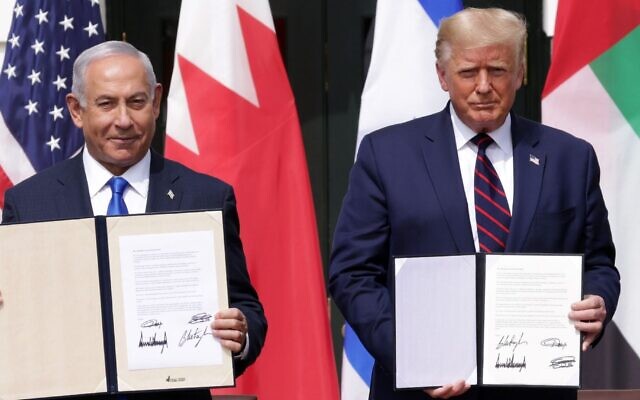 WASHINGTON (JTA) — In an explosive break with one of his closest allies, Donald Trump used an expletive in April to criticize then-Israeli Prime Minister Benjamin Netanyahu for congratulating Joe Biden on his 2020 election win.

In an interview with Axios’ Barak Ravid, Trump added that in his view, Netanyahu “did not want to make peace” in the Middle East.

Ravid conducted the interview, which will be published on Monday, in April for his upcoming book on the Abraham Accords.

“I liked Bibi. I still like Bibi. But I also like loyalty,” Trump told Ravid. “The first person to congratulate Biden was Bibi. And not only did he congratulate him, he did it on tape.”

Netanyahu waited over 12 hours from the time the election was called and was not the first foreign leader to congratulate Biden.

“I haven’t spoken to him since. Fuck him.”

“Bibi is Bibi. Bibi did not want to make peace. Never did.” pic.twitter.com/Xv8xYAIf80

Ravid only published excerpts of his interview on Axios on Thursday, and it’s not clear from them what Trump is referring to in the “peace” comments. But there was friction between the two leaders in the wake of the Trump administration’s plan to address the Israeli-Palestinian conflict, released in early 2020.

At the time, Trump’s son-in-law, Jared Kushner, unveiled a “peace vision” that would have allowed Israel to annex parts of the West Bank — something Netanyahu had long desired and pledged to do during political campaigns — but only if there was Palestinian buy-in within four years of the announcement.

The Palestinians declined, but rather than wait for the Trump negotiators to try and advance the vision within its four-year window, Netanyahu launched plans to annex part of the territory. Kushner implored him to slow the process down.

The annexation talk killed any hope of eventual Palestinian buy-in and proposed an obstacle for the Trump negotiators’ efforts to broker the Abraham Accords — normalization deals between Israel and four Arab nations. Netanyahu backed down in the face of pressure from the United States and the United Arab Emirates, and the Abraham Accords, which normalized relations with the UAE and Bahrain, and soon thereafter Sudan and Morocco, proceeded.

In another interview with Ravid in July, Trump repeated his criticisms of Netanyahu.

“Well, I like him, but he has been there a long time,” he said, adding: “I can tell you that people were very angry with him when he was the first one to congratulate Biden.”

Trump suggested in that interview that Netanyahu’s congratulatory video call to Biden “hurt him badly with the people of Israel.”

“As you know, I’m very popular in Israel. I think it hurt him very badly,” Trump said.
PJC