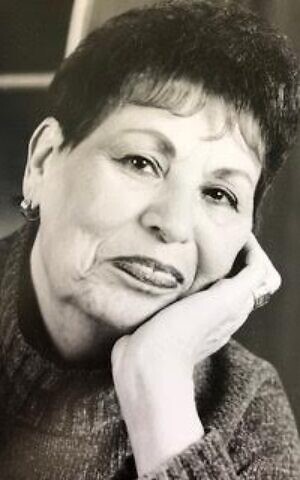 LANDAY: Thelma E. Gold Landay passed away May 24, 2022, in San Diego at the age of 93. Thelma spent all but the last year of her life in Pittsburgh where she was born to Solomon and Lena Weinstein of Squirrel Hill. Thelma graduated from Allderdice High School. She married Harold A. Gold in 1949, had two sons, and resided for almost all the rest of her life in Wilkins Township. After Harold died in 1970, she went to work at the Holiday House as an event planner, helping hundreds of people plan weddings, bar mitzvahs and parties. She met the stars who performed there and made lifelong friends. In 1974, she married Arnold Landay, with whom she had another two decades-long marriage until his death in 1997. Thelma worked as a salesperson at women’s clothing stores, notably Gantos at the Monroeville Mall. She finally retired in her 70s but never lost her fashion sense or her taste in clothes. She volunteered for many years at Family House in Shadyside. Thelma was preceded in death by her parents, her brother, Boris (Beasy) and by her two husbands. She is survived by her sons, Cliff (Julie) and Eric (Marcy) Gold, two stepchildren, Sharon (Bob) Simms and Barry (Rachel) Landay, and five grandchildren, Jeffrey, Hadley, Gigi, Ian and Mardi, and a great-grandson, Rowan. Friends may meet at Ralph Schugar Chapel, Inc., 5509 Centre Avenue, Shadyside on Sunday, May 29, 2022 at 12 noon and then proceed to Betty Rosenberg Cemetery for 1 p.m. graveside services. There will be NO visitation prior to the service. There will be a reception after the service. In lieu of flowers or other remembrances, donations may be sent to the Harold A. Gold Eitz Chaim Fund at Parkway Jewish Center, 300 Princeton Drive, Pittsburgh, PA 15235. schugar.com PJC