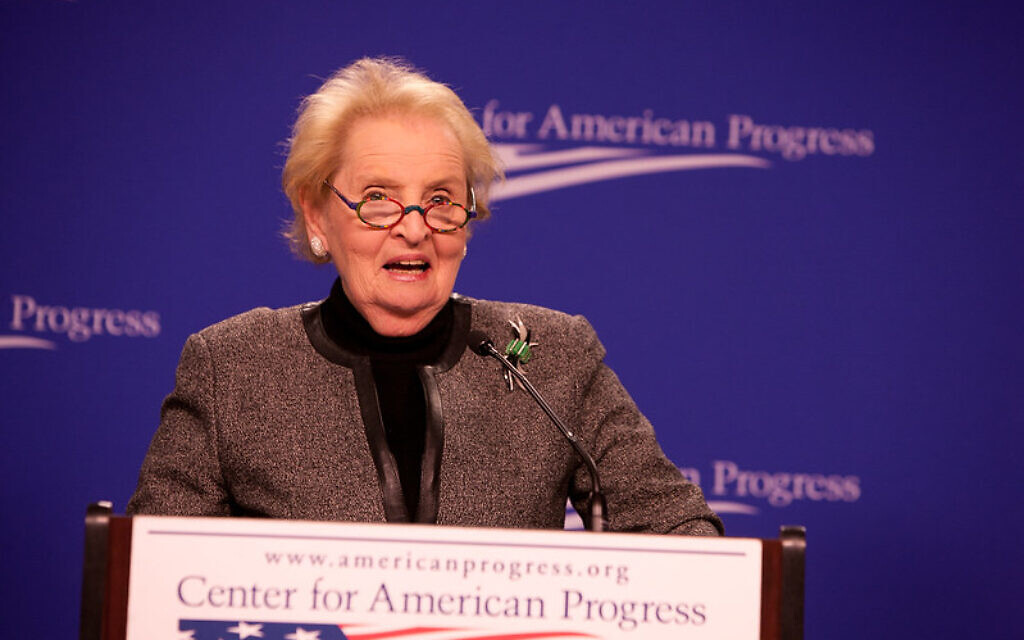 “How long have known me, Stu?” Madeleine Albright asked me that question with a sense of urgency I had not heard from her before.

It was mid-January 1996, and I was in my hotel room in Davos, Switzerland, at the World Economic Forum. She called me through a secure line from her office in the State Department during the transition following Bill Clinton’s 1996 reelection, before she was confirmed by the Senate as the first female secretary of state in American history. I was about to be nominated by the president to the position she offered me as her under secretary of state for economic, business & economic affairs.

“Well,” I replied, “20 years, since you and I worked together in the West Wing of the Carter White House, you as congressional liaison for the National Security Council under Zbig Brzezinski, and me as President Carter’s chief domestic policy adviser.”

The next question was even more odd: “What religion am I?”

“Madeleine, of course, you are a Czech Catholic. What’s this all about?”

She explained that a Washington Post reporter, Michael Dobbs, was doing an investigative article on her background as she awaited Senate confirmation, and shockingly determined that she was Jewish, not Catholic. She had known that her parents twice fled Czechoslovakia: first to London as Hitler and the Nazis were going to take over, and then again in 1948, this time to the United States, after her father, a Czech diplomat who returned after the war, was confronted by Stalin and the Communists. She did not know that both of her parents were born Jewish and converted to Catholicism during the war, raising her and her siblings as Catholics.

“What must I do?” she asked. She told me she feared the American Jewish community would oppose her nomination, believing that she was embarrassed by and covered up her Jewish past, and this might sink her confirmation. Moreover, she said, “What am I supposed to say to my three girls? Am I to tell them they should now convert to Judaism?”

My instant advice was to tell the truth, which was that she never knew about her parents’ conversion; to embrace her newly discovered Jewish past with pride; and that of course, neither she nor her three children should feel they needed to convert to Judaism. I also explained that given my work on Holocaust justice in the Clinton administration, and frequent interaction with Holocaust survivors, that the Jewish community understood that during World War II all sorts of methods were used to protect Jewish children, including placing them in Catholic convents or in Christian households where they were raised by righteous gentiles.

I told her that several of the Jewish friends I had made in Belgium when I was U.S. ambassador to the European Union had been saved in just that way. Tomas Kraus, the head of the Federation of Czech Jewish Communities, later confirmed that “[i]t is common for Jews from this part of the world to be ignorant of their Jewish roots.”

By being candid, I was certain there would be no blowback either from the Jewish community or the Senate. Besides, I reminded her, as U.N. ambassador during Clinton’s first four years in office, she had established herself as a strong, fervent supporter of Israel against Arab attacks.

She followed my advice and was confirmed with a remarkable 99-0 vote. On her first foreign trip as secretary of state, as I was in her office for a last-minute briefing, she looked at her suitcase and, with her characteristic wit, said, “Well, with my newly discovered Jewish background, I suppose I should say I am going to schlep my suitcase!” We all burst into laughter.

But Madeleine Albright went beyond my fondest hopes in identifying with her Jewish past. As Secretary of State, in her maiden trip to her Prague birthplace in July 1997, she went straight to the Pinkas Synagogue to look for her grandparents’ names among the more than 77,000 Czech and Slovak Holocaust victims lovingly inscribed by Czech survivors on the wall of the synagogue. She found the names of her paternal grandparents, Arnost and Olga Korbel, who had perished in the Nazi death camps — Arnost in Theresienstadt in 1942 and her grandmother in Auschwitz in 1944. At the synagogue she said publicly, “Tonight … their image will be forever seared into my heart.”

Later during her tour to welcome her native Czech Republic and two other former Soviet bloc countries into NATO — a burning issue today with the Russian invasion of Ukraine — she toured other Jewish sites in Prague, and movingly confronted her past: “The evil of the Holocaust” has taken on “even greater personal meaning” since she learned the fate of her grandparents. “To the many values and many facets that make up who I am, I now add the knowledge that my grandparents and members of my family perished in the worst catastrophe in human history. So I leave her tonight with the certainty that this new part of my identity adds something stronger, sadder and richer to my life.”

She went a step further and on a later trip went to the small villages where her fraternal and maternal grandparents had lived, to try to relive their history.

As her under secretary, I saw up-close how her background as a refugee from fascism shaped her foreign policy views and her greatest triumphs in the two Balkan Wars, in Bosnia and Kosovo. As U.N. ambassador, she joined with National Security Adviser Tony Lake to successfully urge President Clinton, over Pentagon and State Department opposition, to take aggressive U.S. leadership of NATO and direct military strikes against Bosnian Serbs following the brutality against Bosnian Muslims encouraged by Serbian strongman President Slobodan Milosević.

The July 1995 massacre of more than 7,000 Bosnian men and boys at Srebrenica, dumped into a mass grave, evoked for her the Holocaust her parents had escaped. She confronted Joint Chiefs of Staff Chairman General Colin Powell, stating, “What’s the point of having this superb military that you’re always talking about if we can’t use it?” That military action paved the way for the Dayton Accords negotiated by Richard Holbrooke, the peace agreement that ended the war.

In January 1999, following another Serb massacre of Kosovo Albanians at the small Kosovo village of Racak, Secretary of State Albright brilliantly combined diplomacy with NATO military force, again over Defense Department opposition, to secure a peace which lasts to this day.

She was a strong, constant supporter of my work on Holocaust justice in my negotiations with Swiss and French banks, German and Austrian slave labor companies, and European insurance companies. She gave the keynote speech at the Washington Conference which led to the Washington Principles on Nazi-Confiscated Art, where she weaved her own Holocaust background into the contemporary challenge of returning looted art. And she asked me to lead the U.S. delegation to the Kyoto conference on Climate Change, giving me strong backing for the Kyoto Protocols.

She decided to name the State Department headquarters after President Harry S. Truman, to symbolize the leadership he had taken to build a new, peaceful, post-war world, with U.S. leadership. We shared a laugh when we found out his middle initial “S” was not an abbreviation for any name, but was just a letter his mother added to his name.

We went through tragedies as well. I accompanied her to Dover Air Force Base, where we met the flagged-draped coffins of American diplomats killed in terrorist attacks at the U.S. Embassies in Kenya and Tanzania, and she gave an uplifting speech on the sacrifices American diplomats take to try to create a better world.

Madeleine Albright, tiny in stature but huge in impact, had a charisma, a sparkle, a brilliance and a fluency in Czech, French, Polish and Russian. She connected the foreign policy she forged with President Clinton to the lives of everyday people around the world. All of these qualities made her larger than life. One of her trademarks was wearing a variety of brooches on the lapel of her clothing to underline her political and diplomatic messages. When I asked why, since she had not done this in our early years together, she recalled when Iraq’s dictator Saddam Hussein, following his invasion of Kuwait, compared her to an “unparalleled serpent.” She wore a snake pin in response, and a tradition as born.

The United States has lost a great American public servant, a role model for women as the first female secretary of state, a professor at Georgetown University, an author, a lifelong proponent of democracy and human rights, a constant friend of Israel, and someone who embraced her Jewish background. And I have lost a dear friend. PJC

Stuart E. Eizenstat worked with Madeleine Albright when they were both in the Carter White House and during the Clinton administration in which she was the secretary of state and he was undersecretary of state for economic business and agriculture affairs and special representative of President Clinton and Secretary Albright on Holocaust era issues. This piece first appeared on JTA.