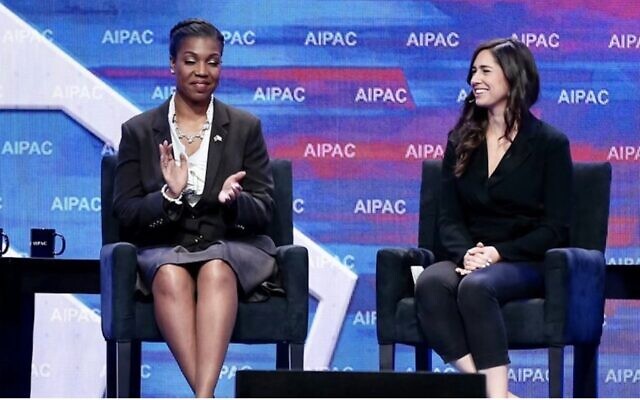 Shelley Greenspan, on right, shown at the 2020 AIPAC policy conference. (Courtesy of Greenspan)

WASHINGTON (JTA) — Shelley Greenspan, a former staffer and board member for a number of national Jewish groups, is replacing Chanan Weissman as the White House liaison to the Jewish community.

Greenspan, 32, whose appointment was first reported Wednesday by The Forward, worked for a period in the mid-2010s in the legislative shop of the American Israel Public Affairs Committee, the pro-Israel powerhouse lobby, and has been a board member of the Anti-Defamation League and Jewish Women International.

A rapid response member of Hillary Clinton’s 2016 presidential campaign, she then went to work for Amazon on its policy team. She joined the State Department in 2020 and recently moved from there to the Biden National Security Council as a policy advisor for partnerships and global engagement. In February, she helped launch Jewish Democratic Women for Action, which seeks to expand Jewish involvement ahead of the November midterm elections.

The White House liaison leads interactions with national Jewish groups. Weissman is ending his second stint in the job, after closing out the Obama administration as its final Jewish liaison and then joining the Biden administration as its first. During his tenure, Weissman launched a number of online forums including frequent pre-Shabbat briefings for the community. PJC