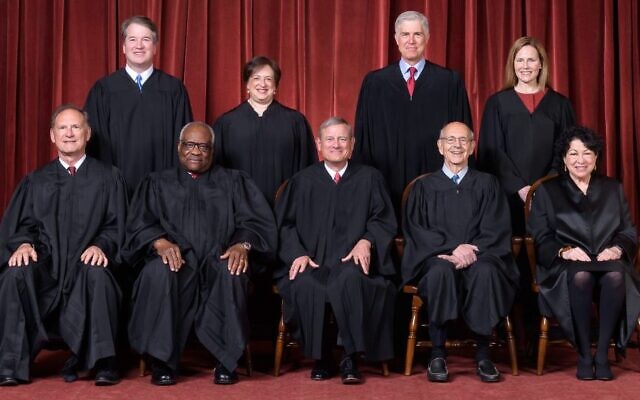 WASHINGTON (JTA) — A key Supreme Court decision on religious freedoms earned praise from Orthodox Jewish groups, and has more liberal groups breathing a sigh of relief that its scope was narrow.

On Thursday, the court issued a unanimous decision overturning Philadelphia’s policy of refusing to work with a Catholic agency that will not place foster children with same-sex parents. Jewish groups had filed friend-of-the-court briefs on both sides of the case, known as Fulton v. City of Philadelphia.

“Today’s historic ruling by the U.S. Supreme Court is of critical importance to the American Orthodox Jewish community,” Nathan Diament, the Orthodox Union’s Washington director, said in a statement. “As a minority faith community in the United States, the robust legal protection for religious practice is an existential issue for us.” The Orthodox Union had joined a slate of Christian groups defending the agency.

Liberal and civil rights Jewish groups, meanwhile, expressed disappointment — but also relief that the court’s decision was narrow and unlikely to impinge on other church-state separations.

“This Supreme Court decision is a devastating loss for Philadelphia children in foster care, who are harmed when the religious beliefs of government-funded agencies override the best interests of the children,” said a statement from the National Council of Jewish Women, one of several groups to file a joint brief on behalf of Philadelphia.

The case had been viewed as a potential watershed moment in which the court’s expanded right-wing majority could deliver a sweeping win for the religious right by overturning a 1990 decision that allows the government to restrict certain religious practices as long as the government’s intent is not discriminatory.

Instead, the decision in Fulton took care not to overturn decades of precedent, potentially allowing the three liberal justices to sign on; meanwhile, the court’s three most conservative judges criticized the decision for its timidity in a concurring opinion. The majority opinion was authored by Chief Justice John Roberts, who has endeavored recently to preserve the court’s reputation as above politics in a polarized society in which Democrats, in particular, are seething at Republican maneuvers to entrench the court’s conservative majority.

Roberts wrote that because screening criteria vary among Philadelphia’s fostering agencies and the city allowed exemptions to its policies, singling out the Catholic agency for its specific criteria was discriminatory.

“So long as the government can achieve its interests in a manner that does not burden religion, it must do so,” Roberts wrote.

That conclusion heartened Orthodox groups that, like Catholic Social Services, may see requirements to serve LGBTQ families as infringing on their religious beliefs.

“Philadelphia’s policy locked religious agencies out of the foster care system unless they were willing to openly violate their religious beliefs, and children who needed caring families paid the price,” the Coalition for Jewish Values said in a statement.

Agudath Israel of America, which led a grouping of Orthodox groups in a friend-of-the-court brief, gave the decision qualified praise, noting that its narrow scope stopped well short of delivering the changes that conservative and religious organizations had hoped would happen.

“We are gratified that the Court has ruled that the City of Philadelphia violated CSS’s Free Exercise rights,” said Rabbi Chaim Dovid Zwiebel, the group’s executive vice president. “But we are disappointed that the court did not use this opportunity to overturn Employment Division v. Smith. We can only hope that soon the court will revisit Smith, which has had a detrimental impact on religious freedom in America.”

The 1990 Smith decision, upholding Oregon’s right to deny unemployment benefits to Native Americans who had been fired for ingesting peyote as part of a religious ritual, held that a government may apply laws that effectively discriminate against a religious practice as long as the laws do not specifically target religious practice. Two conservative justices on the court, in the concurrence with Roberts’ ruling, said that it should have gone farther and overturned Smith.

The O.U’s Diament said in an interview that he too had hoped for Smith to be overturned, but that a unanimous decision encompassing the court’s three liberal justices was no small thing.

“A 9-0 First Amendment ruling very emphatically that religious liberty is of the highest constitutional value, we consider a pretty clear victory,” he said.

Jewish groups that backed Philadelphia expressed disappointment but also noted with relief that Roberts ruled narrowly and did not touch Smith.

The Anti-Defamation League, which led an amicus brief that included Bend the Arc, Jewish Women International, Keshet, the National Council of Jewish Women and T’ruah, said the ruling underscored the urgency of passing bills under consideration that would ban discrimination against LGBTQ individuals seeking to adopt or foster children. “Although this is a very narrow ruling, we must not lose sight of the fact that discrimination pervades the child welfare system throughout the country,” the ADL said in a statement.

In 2018, the ADL took up the cause of a Jewish family in South Carolina barred by a state-sanctioned agency from fostering because of their faith.

The Reform movement, separately, said that it too was disappointed in the ruling but emphasized that it did not grant agencies a broad right to discriminate.

“We continue to hold that social service providers should not be allowed to choose whom to serve when receiving government funding, as allowing discrimination to supersede provision of social services will endanger lives and harm the most vulnerable,” it said in a statement. PJC