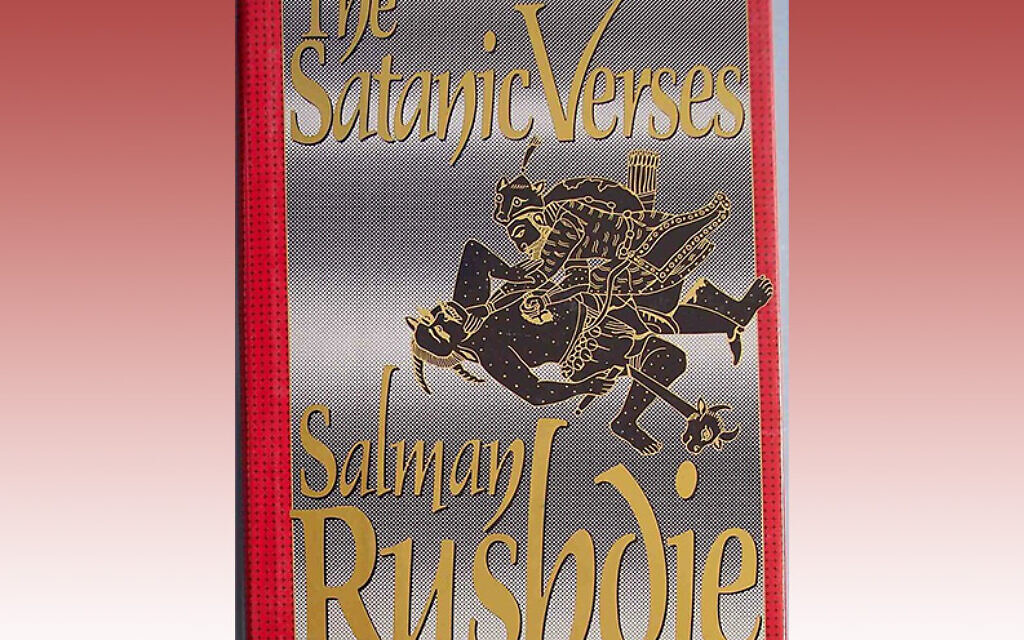 The Satanic Verses. Photo by Dr Umm, courtesy of flickr.com.

When elementary school teachers discuss authors, they usually talk about those who write for children and teens. Salman Rushdie is not that kind of writer, but one perk of growing up in the Islamic Republic of Iran was that I had already heard his name by the time I was in fourth grade. It was Quds Day (which is the last Friday of Ramadan, but since schools in Iran are closed Fridays, it was the last Thursday), and the principal gave a speech in which he talked about Salman Rushdie. In keeping with Islamic countries’ tradition of linking anyone you don’t like to Israel, he labeled Rushdie a “Zionist mercenary.”

Any kid in England is familiar with the name J.K. Rowling, even if he or she has never read Harry Potter. In Iran, Salman Rushdie has the same status, although he’s not a local writer and his books are banned.

In high school, finding and sharing banned books was a hobby for me and my friends. It wasn’t too hard and, especially today, the internet makes it easy to find this stuff. And, if reading PDF files is hard on your eyes, offset printing is always an option. Yuval Noah Harari was added to the list of banned writers in Iran almost three years ago, but still today you can buy his “Sapiens” in plenty of bookstores.

“The Satanic Verses” by Salman Rushdie was one of our early interests. The fun fact is we actually sent these files to teachers. I remember a few teachers even encouraged us. Of course, those were secular teachers. We had to study Islamic texts in school and those teachers weren’t secular at all, but that didn’t prevent us from debating with them about the ideas we encountered in the forbidden books. Of course, one of the first topics wasn’t in a book, but rather about the author of a book. How, we asked our Islamic studies teacher, could Imam Khomeini order the killing of Salman Rushdie?

As is well known, Ayatollah Khomeini, the Supreme Leader of the Islamic Republic of Iran, issued a fatwa (religious legal ruling) in 1989 ordering the assassination of Salman Rushdie. In Iranian universities, all students in all faculties must pass compulsory courses on Islamic theology and the Islamic revolution, and this fatwa is routinely studied in these courses. University classes tend to permit more freedom of expression than is the norm in Iran, and students often challenge the fundamentals of official state beliefs. In fact, arguing with these rigid professors was a form of entertainment for us.

The overarching question was the matter of assassination in Islam. We asked dozens of teachers and professors whether Muslims have the right to kill heretics. The usual examples were Rushdie as well as Ahmad Kasravi, an Iranian lawyer and historian murdered in 1946 by a hardline Islamic group that Khomeini often praised.

The answer to our question was always the same formulaic response based in Islamic law but adjusted to accommodate the regime’s particular version of Shia Islam. “Islam doesn’t allow assassination unless a marja — a source of emulation — orders it,” and because in their view Khomeini was a marja, pursuing the death of Rushdie was spotless.

Ayatollah Ruhollah Khomeini passed away in June 1989, a few months after changing Rushdie’s life forever. It was foreshadowed by an incident from just a few weeks earlier. In January 1989, on Fatimiyya, the holiday marking the martyrdom of prophet Muhammad’s daughter, Iranian state radio asked random people to name the ultimate role model for Iranian women. The answer was obvious, Fatima. Everyone gave the right answer until one woman didn’t. Her idol, she said, was Oshin, the main character of a popular Japanese series!

Ayatollah Khomeini found the interview insulting and demanded that the head of the Islamic Republic of Iran Broadcasting fire and punish those responsible for airing it. Khomeini wrote that if the insult was intentional, the blasphemer would certainly be sentenced to death. (Four IRIB employees were sentenced to four years in jail and 40 lashes they were later pardoned.)

Khomeini’s reaction to the Oshin interview was surprisingly harsh, even for his close lackeys. The same was true of his fatwa against Rushdie. Khomeini called for a global attempt to summarily kill the author without any debate and with no room for challenge, as is the norm in the Islamic world. Even muftis in the Middle Ages didn’t issue a death verdict for a heretic without asking for repentance first.

But by that last year of Khomeini’s life, the pattern of casual execution was already in place: In the summer of 1988 his orders led to the state-sponsored massacre of an estimated 30,000 political prisoners throughout Iran. PJC

Ali Deilami was a journalist in Iran, working for ISNA (Iranian Students News Agency) from 2019 to 2021. He now lives in Milan, Italy. This first appeared on The Times of Israel.