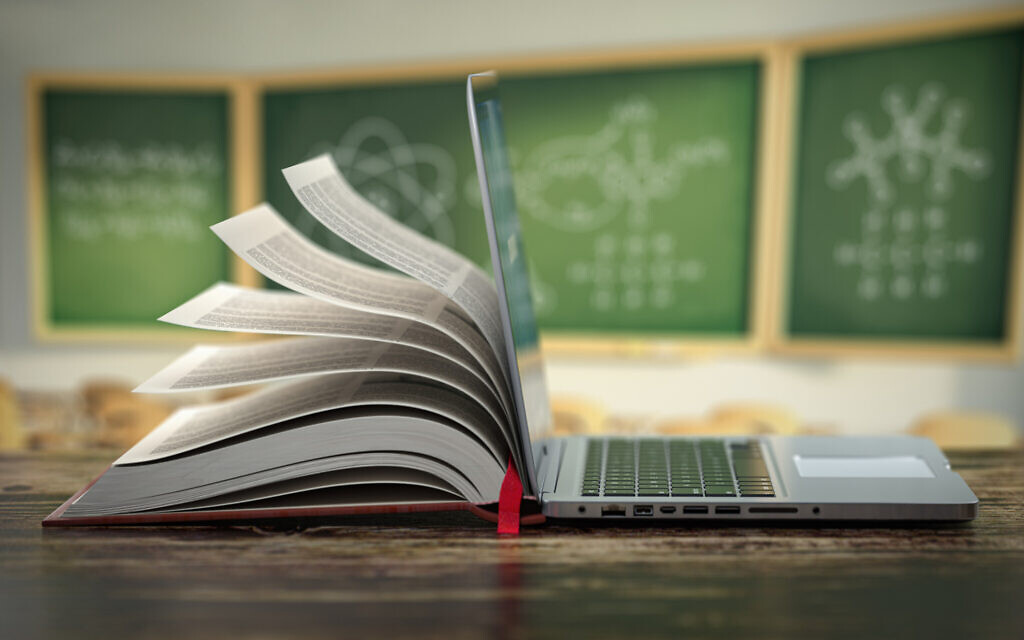 Open laptop and book compilation in a classroom. Photo by Bet_Noire via iStockphoto.com

I get requests for donations to Jewish organizations almost every day. And there is no doubt about it: Almost every request is for a worthy cause. Antisemitism (Judeophobia) is rising. Israel is under assault. People are in need. Buildings must be built. And the list goes on and on. I have no criticism of any of this. However, our people face an existential threat, and it does not get enough fundraising attention from Jewish organizations. Too many of our own people are drifting away from the religion.

Synagogue attendance is down, and intermarriage is up. More Jewish children are growing up with only a vague cultural or ethnic connection to our religion. And this is not enough to sustain us as a people.

The answer to this is, as it is with so many things, education. But the once-a-week religious school model that dominates both the Reform and Conservative movements (which make up approximately 54% of American Jewry) is not sufficient to keep young Jews engaged or to cement their attachment to Judaism. There simply is not enough time with this model to teach everything that students need to know to live vibrant, committed Jewish lives.

I taught religious school for many years, and the children I taught were wonderful. But it was always clear that religious school was never the center of their lives. It was an add-on. Their secular lives and secular education took up most of their time. They paid attention and did their work, but I knew that they would not retain what they studied. It just wasn’t enough. We all know how common it is for young Reform or Conservative Jews to attend religious school and then abandon all Jewish education after their bar or bat mitzvah.

It is different for the various Orthodox movements (which account for approximately 9% of American Jewry), where Jewish day schools are the norm. But there is a problem here as well. These schools are very expensive to run, and tuition is often a real burden for the Orthodox.

An eJewish Philanthropy article last year by Sherwin Pomerantz, who is on the board of directors of the Pardes Institute of Jewish Studies, was titled “US Jewish Day School Tuition-Simply Out of Control.” Orthodox families are usually larger than Reform or Conservative families, so the cost of sending multiple children to a private, Orthodox school can be prohibitive. Some elementary schools cost around $20,000 a year per student, and high schools are even more expensive. Pomerantz estimated that the total cost of sending his own four grandchildren to private Orthodox schools, from kindergarten to 12th grade, is approximately $1,184,000. Yes, there are scholarships, but they only help a little, and it is not easy to qualify for them. And imagine how expensive it would be if you had more than four children, as many Orthodox families do.

We are dealing with a quiet crisis, and we need to treat education as our main priority. The Shema V’ahavta tells us to “teach our children diligently,” and we are not doing that well enough. We need to help our children know who they are, where they come from and what their place is in this beautiful world. They need to know the value of Jewish law and ethics and the importance of Israel to us all. They need to know that they have a mission in life and that each of them is an important part of that mission. The strength of our religion depends on education more than anything else, and today it is either insufficient or too expensive.

We need a whole new generation of Jewish day schools. Our fundraising organizations need to re-evaluate their priorities and focus on founding new schools, supporting existing schools and making them all affordable with subsidies or scholarships. This will not be an easy task, because the religious differences of the various Jewish movements have to be taken into account. One size will not fit all. But what could be more important?

I call upon the leaders of our Jewish organizations to re-evaluate their fundraising goals, so that they can make possible the kind of Jewish education that American Jews clearly need, with a strong religious education, combined with the necessary secular education to be successful in life. This is what the soul of American Jewry needs more than anything. PJC

Solomon D. Stevens has a Ph.D. from Boston College. His books include “Religion, Politics, and the Law” (co-authored with Peter Schotten) and “Challenges to Peace in the Middle East.”