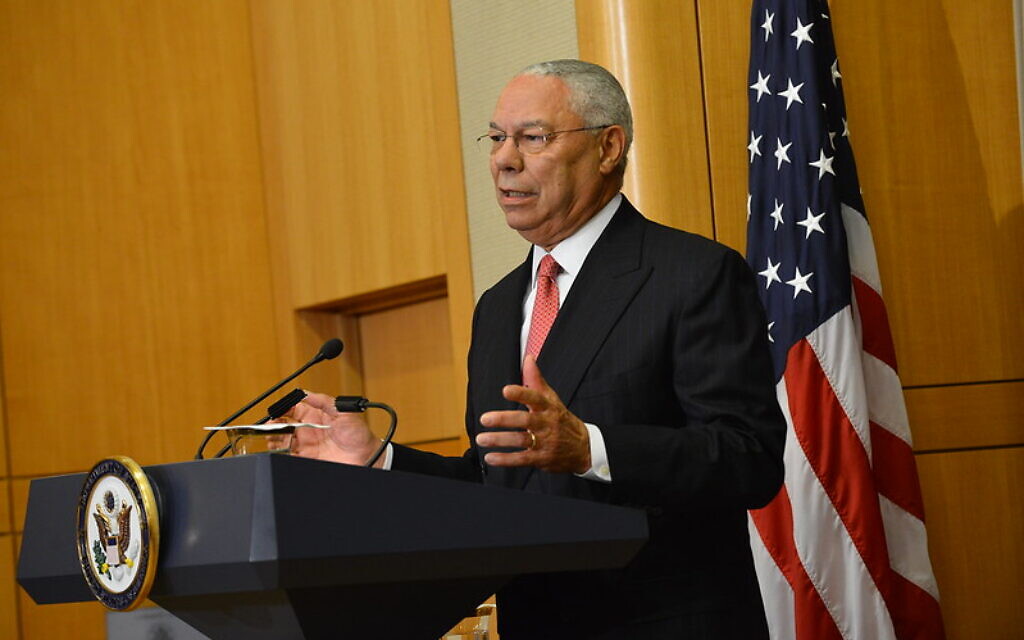 I met Colin Powell, who died on Monday at age 84, when he succeeded Maj. Gen. Carl Smith as Secretary of Defense Caspar Weinberger’s military assistant. Like Smith, Powell was a two-star general, but Weinberger quickly promoted him to the three-star rank of lieutenant general, the first military assistant to hold that rank. Powell had first met Weinberger years before, when he was a White House fellow and Weinberger was President Richard Nixon’s director of the Office of Management and Budget.
Powell impressed as an intelligent, well-spoken and clear-thinking officer. It was clear that he had to be someone special; it was not easy for a Black person to move up the ranks during the 1960s and ‘70s.

I came to know him when we flew together to Quebec on a small military jet. The occasion was the 1985 Reagan-Mulroney summit, termed the Shamrock summit because both the American and Canadian leaders had Irish roots. Powell regaled me with stories of his childhood in a Jewish neighborhood in the Bronx. He talked about his being a “Shabbos goy” — turning on lights for Orthodox Jews who refrained from doing so.

But his favorite story was about his time working in a shoe shop whose proprietor was Jewish. Much of the business was done in Yiddish, which he spoke more than passably well. Colin would recount that when the shopkeeper’s relatives came shopping expecting a discount, his boss would overhear the conversations in Yiddish. The relatives would duly choose their shoes and Colin would hurry down to tell his boss what they had chosen. And the price would magically increase before the discount. And Powell would finish his story, “So you see, I was a shill for a Jewish shoe salesman.”

Powell went on to earn his degree from City College, which had a very competitive admissions policy. After ROTC, he joined the Army and served with distinction as he moved up the ranks.

Subsequent to his supporting Weinberger as his confidential military aide, he served as a corps commander and then as deputy national security adviser to Frank Carlucci whom he then succeeded as President Ronald Reagan’s national security adviser. Carlucci, who had worked with Powell at the Department of Defense, returned to the Pentagon as secretary of defense. Powell retained his military rank as did H.R. McMaster many years later.

As national security adviser, Powell believed in leadership, not merely management. His staff was lean, but talented. Powell continued the push to bring the Cold War to an end and then quickly earned his fourth star, moving back to the Army as head of its Forces Command forces in the first years of the George H.W. Bush presidency.

Everyone knew that it was a short-term job. He was expected to become a chief of staff. But he did better. When Bush named Powell to be the first Black chairman of the Joint Chiefs of Staff, it was an inspired choice. Powell presided over the post-Cold War reduction of the armed forces, what he called the Base Force. But he also was Bush’s top adviser as the United States smashed Saddam Hussein’s Iraqi forces in the 1990-92 Gulf War. His war briefings wowed television audiences.

Powell’s popularity reached stratospheric levels and there was talk of his running for president on the Republican ticket. He declined to do so, reportedly because his wife Alma worried for his safety. He remained an exceedingly popular figure and his appointment to secretary of state in the George W. Bush administration was widely hailed.

Powell was a popular secretary inside the department but he did not get along with my boss, Secretary of Defense Don Rumsfeld. He only reluctantly supported the administration’s impulse to go to war with Iraq and only on condition that Washington win international support. To that end, and regrettably, he asserted to the UN Security Council shortly before the attack on Iraq that Saddam possessed biological weapons and was proceeding with a nuclear weapons program.

I remained in touch with him after his retirement. He started a program to encourage and support the careers of young Black Americans and established The Colin Powell School for Civic and Global Leadership at his alma mater, City College.

Powell was at times accused of being less than sympathetic to Israel. That was not at all the case. He strongly believed in a two-state solution, and as secretary of state developed the road map for peace that still underpins U.S. policy.
He certainly was friendly with Israeli officials. In one hilarious instance that I witnessed at a reception we both attended, the Israeli attaché, Adm. Ben Shoshan, asked me to introduce him to Chairman Powell. I did so, and Powell asked him, “Vos macht a yid?” an old Yiddish greeting.

Shoshan, who spoke no Yiddish, asked me what Powell had said. At which point Powell asked me, “Iz doss a Yid?” (He’s Jewish?)
I did not translate that for the admiral.

May the memory of this great, heroic and exceedingly decent American be for a blessing, especially in these troubled times for our country. PJC