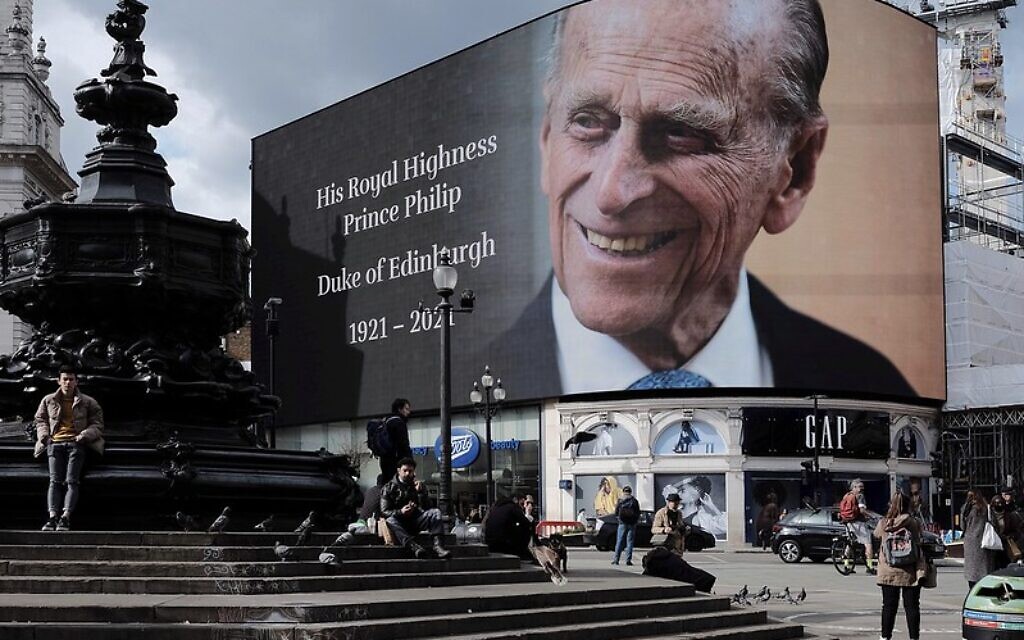 The differentiating factor of a royal engagement with the Duke of Edinburgh was laughter from the guests. The Duke’s humour and irreverence are well documented, and I had a close-up view of this in my three years working at Buckingham Palace, whether he was speaking to young or old, aristocracy or celebrity, Brit or foreigner.

The Duke’s death at the age of 99 leaves a hole in the fabric of the nation, as the Queen’s companion and steadfast support over 73 years of marriage.

The Duke had a powerful and natural connection with the Jewish community. I think that was based on three things.

The first was the influence of Kurt Hahn, a German Jew who escaped the Nazis and came to the U.K., establishing Gordounstoun,
the Scottish private school. Prince Philip, who had been born in Corfu and was part of both the Greek and Danish royal families, became one of Hahn’s early pupils at Gordounstoun. Hahn was a formative influence on the young prince. He advocated stretching young people to their potential, encapsulated in his motto, “There is more in you than you think.” He also thought that freedom and discipline were not mutually exclusive, and both were necessary ingredients to mold young people’s character. Although Hahn later converted to Christianity in 1945, his German Jewish roots were a strong part of his identity.

The second link the Duke had with the Jewish community was through his mother, Princess Alice, who sheltered Jews during the Holocaust. She hid a Jewish family, the Cohens, at her house in Athens during the war. Years later, in 1994, she was made a Righteous Among the Nations and the Duke visited Israel for the ceremony. Speaking on that occasion, he said: “It never occurred to her that her action was in any way special. She would have considered it to be a perfectly natural human reaction to fellow beings in distress.” On his visit to Jerusalem, the prince was able to visit his mother’s grave at the Russian Orthodox church of St. Mary Magdalene.

The lesson of Princess Alice’s heroic action seemed to leave an indelible mark on the prince. It gave him an appreciation of humanity’s capacity for scapegoating and prejudice, and he showed empathy to the victims of this. This even came to light as a young boy when he came to the rescue of a fellow Jewish pupil at school in Germany, who was picked on and had his hair cut off. Speaking decades later, the Prince of Wales said: “I shall always be proud of my father’s act of compassion.” The Duke’s personal experience and family history meant that he had a particular interest in engagements with Holocaust survivors, which became more frequent over recent years.

The third connection point the Duke had to the Jewish community was an alignment of values. Through a series of conversations I’ve had with different people in the know over the years, I am convinced that the Duke was admiring of Jewish values of hard work and resilience along with a can-do spirit. The Jewish story of bouncing back from setback and persecution would have found favour in the no-nonsense Duke’s eyes. He channeled his vision through his charity, the Duke of Edinburgh Awards, which he founded in 1956 and operates in 144 countries including Israel. Of course, Jewish schools have participated and many Jewish philanthropists have supported this famous charity.

The Duke has engaged with Jewish charities, visited Jewish schools and worked with Jewish figures over the years. One of his most interesting areas of work was in convening an interfaith dialogue between Jews, Christians, and Muslims in 1984, together with Sir Evelyn de Rothschild and Crown Prince El Hassan of Jordan. He also founded the Alliance of Religions and Conservation, and it’s no surprise that his eldest son and grandson are so engaged in environmental work.

I have my own memories of the Duke, mainly from the engagements I worked on. My mind wanders to the annual meeting the Duke did with the cricket County Champions at the Palace every year, a Council of Christians and Jews gala dinner in 2011 or a visit to a Hindu school at the start of Jubilee year in 2012, which he seemed so much to enjoy. I saw him and the Queen work side by side. He would often lighten the mood and was an important foil for the more formal Queen.

My favourite anecdote about the Duke (courtesy of Barry Hyman) relates to when he visited the Sternberg Centre in the 1990s and was shown the interfaith room, with his hosts telling him that they worked hard on Jewish-Christian relationships. “Really,” he replied, “and what about Jewish-Jewish relationships?”!

Unsurprising for a 90-plus-year-old, his health has been up and down. He had a scare during the Diamond Jubilee in 2012, and missed some of the main weekend celebrations that year. His loss 62 days before his 100th birthday, and the year before the Queen’s Platinum Jubilee, comes at a particularly cruel time (the Queen lost her mother and sister at the start of Golden Jubilee year in 2002). PJC

Zaki Cooper is a trustee of the Council of Christians and Jews, and is on the Advisory Council of the Indian Jewish Association. This piece first appeared in Britain’s Jewish News.