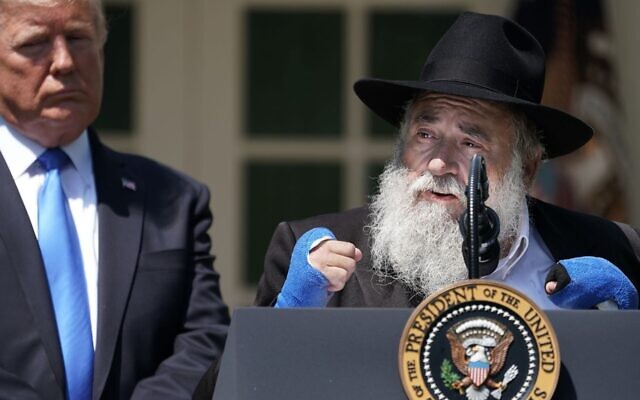 U.S. President Donald Trump (L) listens to Congregation Chabad Rabbi Yisroel Goldstein of Poway, California, speak during a National Day of Prayer service in the Rose Garden at the White House in Washington, DC on May 02, 2019. (JTA/Chip Somodevilla/Getty Images)

(JTA) — The rabbi who lost a finger in a shooting attack on a Chabad synagogue in Poway, California, in 2019 pleaded guilty to tax fraud.

Rabbi Yisroel Goldstein pleaded guilty Tuesday in a scheme in which donors contributed to his synagogue but then got most of the money back, enabling the donor to claim a tax deduction. A charging document detailing the scheme was unsealed in federal court in San Diego, the Los Angeles Times reported.

The scheme resulted in more than $6.2 million in fraudulent donations, resulting in a $1.5 million loss to the federal government. Goldstein could face up to five years in prison.

Goldstein retired from the Chabad synagogue in November, seven months after confronting a gunman who entered his synagogue on April 27, 2019, the last day of Passover. The attack claimed the life of one congregant: Laurie Gilbert Kaye.

In an op-ed published in the New York Times two days after the attack, Goldstein wrote that he was living on borrowed time, and would strive to make every action he performed meaningful. Shortly after that, he met with President Donald Trump at the White House and called the president “a mensch par excellence,” using the Yiddish term for an upright person. Vice President Mike Pence visited the Poway synagogue with his wife last summer.

“From here on in I am going to be more brazen,” Goldstein wrote in the Times. “I am going to be even more proud about walking down the street wearing my tzitzit and kippah, acknowledging God’s presence. And I’m going to use my voice until I am hoarse to urge my fellow Jews to do Jewish. To light candles before Shabbat. To put up mezuzas on their doorposts. To do acts of kindness.”

According to the Los Angeles Times, the investigation of Chabad of Poway began years before the attack. A search warrant was served on the synagogue in October, 2018. Prosecutors allege that the scheme was part of a broader effort involving the synagogue and related non-profits. In one instance, prosecutors say Goldstein bought gold bars and coins in an effort to conceal a donation.

Chabad headquarters in New York condemned Goldstein in a statement, saying it moved to relieve him of his duties after it learned he was under investigation last year. PJC