Robert Krakow had tired of life as an attorney, so he became a playwright. Captivated by the events of World War II, Krakow drafted a mock trial of Adolf Hitler, “False Witness: The Trial of Humanity's Conscience.” In the play, he incorporated a scene in which Anne Frank serves as prosecutor and William Shakespeare, Franklin D. Roosevelt and Henry Ford testify as witnesses.

“False Witness,” Krakow told virtual attendees during a June 10 Classrooms Without Borders event, was so successful that someone from the Jewish Federation of Palm Beach County asked him to pen another.

Krakow responded by writing “The Trial of Franklin D. Roosevelt,” a 35-minute play in which Roosevelt is tried for his handling of Jewish refugees.

At the heart of Krakow’s “Trial” is Roosevelt’s 1939 refusal to welcome the SS St. Louis — aboard the German ship were 937 Jewish passengers who were fleeing antisemitic Europe.

After the ship and its passengers were denied entry into the United States, Cuba and Canada, it was forced to return to Europe. Historians estimate that a quarter of the passengers subsequently died in Nazi concentration camps. The story of the SS St. Louis was reported worldwide. Because of the refusal of countries to welcome the ship’s Jewish refugees, the SS St. Louis proved a “spectacular propaganda victory for Hitler and the Nazis,” Krakow explained to his audience.

Following the staging of “The Trial of Franklin D. Roosevelt,” Krakow said, he organized a reunion for the surviving passengers of the SS St. Louis and launched a related foundation, the SS St. Louis Legacy Project. Then, Krakow and 14 surviving passengers traveled to the U.S. Department of State in September 2012, where Deputy Secretary of State William Burns — on behalf of President Barack Obama and Secretary of State Hillary Clinton — not only welcomed the surviving passengers, but issued an apology by the State Department for refusing to address the Jewish refugee crisis prior to and during WWII.

After coming at the story of the SS St. Louis from so many angles, Krakow began a new project. Using footage from the various events he and the surviving passengers participated in, Krakow created “COMPLICIT,” a documentary that included historic footage and interviews relating to the U.S. government’s refusal to welcome the ship’s passengers. 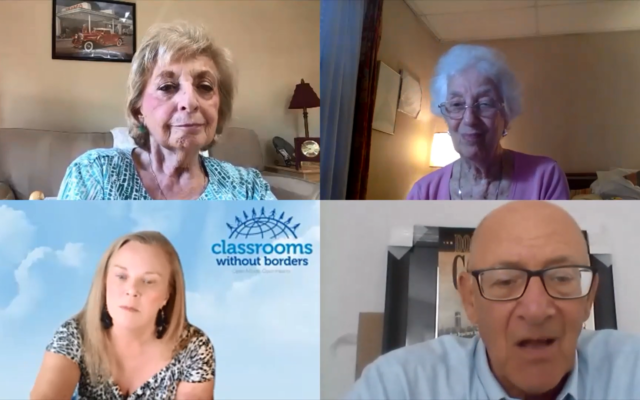 Geismar shared childhood memories of Kristallnacht, her experience as a 4-year-old aboard the SS St. Louis, how she and her parents were fortunate to be welcomed into England, and how she strives to remind students that “hatred is not a personal problem, but a societal problem.”

“Hatred of any group — religious, racial, ethnic — is learned and can be unlearned through education, contact with the other and reaching out to establish dialogue and positive action,” she said. “People have to be upstanders, not bystanders, because bystanders make you complicit.”

Wiener was 10 months old when she and her parents boarded the SS St. Louis. Too young to remember the voyage, Wiener recounted the tale her parents often related: how the ship’s
captain Gustav Schröder heroically tried to save the Jewish passengers; how upon returning to Europe her father fortuitously requested that his young family be taken to England; and how the story of the SS St. Louis serves as a continuing lesson to “work and fight against any bigotry.”

“Each one of us in this wonderful country of the United States has the responsibility to speak up, and fight, and work against any prejudice, any bigotry and certainly antisemitism, because it doesn’t stop with hatred of Jews,” Weiner said. “It eventually permeates everyone’s life, and we are all affected by it.”

Reich, an expert in Holocaust and genocide studies, told the audience that Krakow, Geismar and Wiener “remind us not only of the Holocaust itself, but of the ways in which antisemitism elsewhere made it impossible for Jews trying to escape a tightening vise in Germany — they had no place to go because no country would take them, including, so devastatingly, our own. We too easily forget that history.”

History serves as a vital educational tool, said Ellen Resnek, CWB’s educational programs and outreach manager. With the rise in antisemitic activity, she continued, CWB’s role is to “educate our young people and try to counteract all hate across the globe.”

The story of turning refugees away at the border isn’t a tale that’s relegated to the past, said Tsipy Gur, CWB’s founder and executive director.

“For me,” continued Gur, “this is a very big issue. When you think about it, we are all refugees.” PJC