Silhouette of refugees walking in a row. Photo by AndreyPopov via iStock

“Where would I be if they hadn’t come over?” asked Rosenthal. “I’m darn glad they did, and I feel I can help other people come here and lead a good life.”

On May 2, Rosenthal, 78, leafed through paperwork, deciphered questions and aided individuals as part of a Jewish Family and Community Services citizenship clinic hosted by Rodef Shalom Congregation.

JFCS holds these citizenship clinics in a few locations, and often at Rodef Shalom. Designed to help refugees through the lengthy naturalization process, the clinics are an opportunity to assist parties with applications, remember personal histories and better other people’s futures, Rosenthal said.

Approximately 8 years ago, Rosenthal heard about the clinics from a fellow member of Rodef Shalom, who told him volunteers were needed at one of the clinics at the Shadyside congregation. Rosenthal volunteered and found it so gratifying that he returned regularly to lend a hand at other Rodef Shalom-based clinics, which he believes is of particular importance.

“I know there are people who are in need, some in desperate need, to find a good life,” he said. “Some of the people I’ve helped in the past were born in refugee camps. Some spent 20 years in refugee camps before they could get out.”

John Cavicchio, JFCS’s Pro Bono and Family Law coordinator, who is overseeing the program, said Rosenthal isn’t alone in his sentiments and that there’s a benefit to doing this type of work.

“Knowing you are generally able to help someone, that’s the reward,” he said. 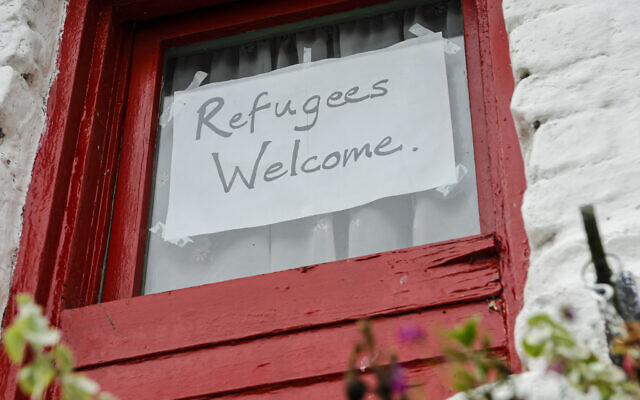 Photo by Stephen Barnes via iStock

Due to the pandemic, Sunday was the first time JFCS offered a citizenship clinic online, according to Allie Reefer, JFCS’ public relations specialist.

Cavicchio said the program was designed to begin with a “standard video chat call” and then transition into secure breakout rooms where volunteers, staff and clients can maintain privacy while going through the application.

“This can be extremely specific and confusing, and may be overwhelming, for someone with language or cultural barriers,” said Cavicchio.

Rosenthal agreed and cited the application’s intricacy. For example, form N-400, a 20-page application for naturalization, asks not only about an individual’s marital or educational history, but also prior involvement in genocide, torture or military service.

Rosenthal, a Rodef Shalom board member, credited the congregation’s Community Outreach and Social Action Committee with providing volunteers for the upcoming clinic. These are people who aren’t necessarily attorneys, he said, but come from “different walks of life” and wish to “do good through social action.”

Cavicchio said the volunteers have all completed document-specific training and that legal staff is available should questions arise.

JFCS has a proud history of assisting refugees and immigrants, said Reefer. As recently as the past 6 years, JFCS has filed more than 1,000 citizenship applications, she said.

“In addition to their ability to efficiently guide people through the process of becoming Americans, the clinics’ use of volunteers sends a message to immigrants that they are wanted and valued by their neighbors,” he said.

“These are people who are fleeing their homeland because they have to,” he said. “They’re in danger one way or another and it’s a good thing to help them.” PJC