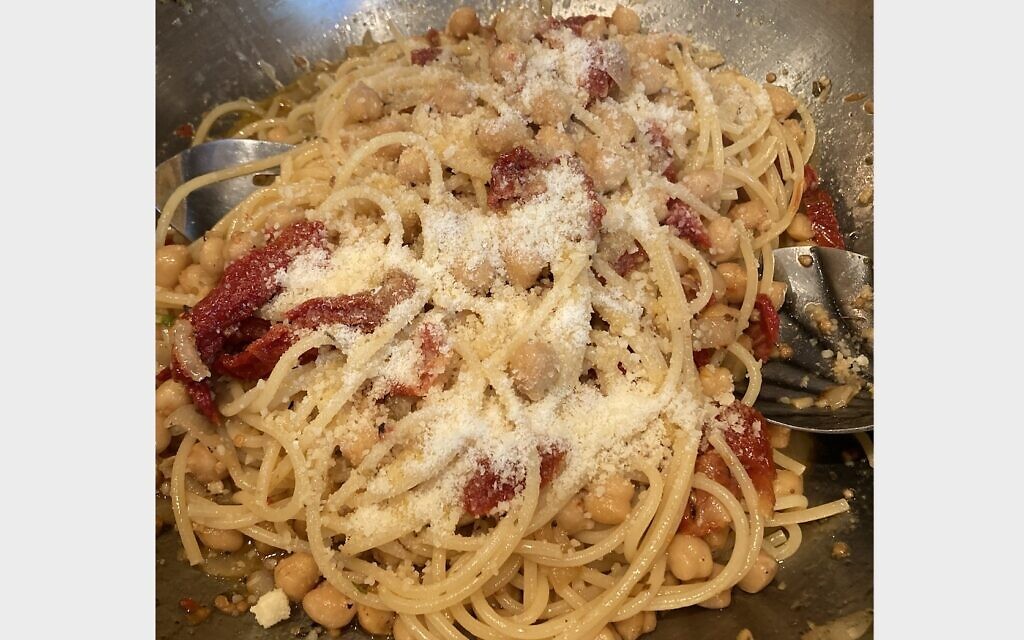 Last week I came home from a work trip after eating mediocre hotel food for two days. It was late, I was tired and the last thing I wanted was to go out to eat.

The cupboard seemed bare, but I was loathe to head to the store, so necessity became the mother of invention. I scoured the pantry and found an onion, some garlic, a can of chickpeas and some dry pasta. Then I checked the fridge and, lo and behold, found a half jar of sundried tomatoes in oil, a small amount of Parmesan cheese and a bit of white wine.

OK, I thought: I can work with this. And the dinner was delicious.

Now, I grant you, many people will not have a half jar of sundried tomatoes in the fridge as a random item that made a lovely addition to my simple pasta recipe, but I bet you have something offbeat that can jazz up this type of dish. Olives? Artichokes? Some frozen spinach? And if all else fails, go with the chickpea/onion/garlic combo, which is simple and delicious.

The second dish below is another pantry meal — rice, lentils, onions and a few spices. Mujadara is a typical Levantine dish that varies from family to family, region to region in terms of spices and slight variations, but the basic preparation is the same. It’s simple, economical, filling, vegan, pareve and gluten-free and can be a meal or a side depending on personal preference.

In my house, we call these types of dinners “Stone Soup” after the classic children’s tale where the whole town claims to have no food to prepare a proper meal, and a stranger offers a recipe for “stone soup,” which encourages each villager to contribute a little something. A carrot here, an onion there, some rice, some beans and, suddenly, the whole community is enjoying a bowl of goodness.

As noted above, you can swap out ingredients you have on hand — white beans for the chickpeas, a can of tomato paste or artichokes for the sundried tomatoes, some vegetables, olives, capers, et cetera.

Bring a large pot of salted water to a boil.

In a large skillet, heat the oil and sauté the onion and garlic until fragrant. Add the spices, tomatoes and chickpeas, then add the wine and simmer to reduce for about 8 minutes while the pasta water comes to a boil.

Cook the pasta to al dente (one minute less than the package instructs), reserve ½ cup of cooking water, then drain and pour it into the skillet with the chickpea mixture. Toss well, add the pasta water to spread the sauce around and add the cheese before serving.

This dish is a riff on many similar ethnic staples — think kedgeree from India, rice and beans from many different Latin American cuisines, red beans and rice from Cajun kitchens, Persian polo … you get the idea.

The key to successful mujadara is in browning the onions. This step cannot be rushed, so don’t make this on a hectic weeknight. The beauty of this dish is its simplicity and general low effort, but it takes time.

There is a divide among cooks about the lentils in this dish. Some are adamant that small French lentils must be used and parboiled, then only cooked with the rice and onions to soften them but not allow them to dissolve into a mush. Other recipes use regular brown lentils, throw everything together and let it do its thing. Guess which kind I made!

A note on the rice: I used white basmati because I had it on hand (remember, this is a pantry meal). I would consider using brown rice in the future to optimize the whole grain for health — in that case, the rice would need more water and more cooking time, so if you go that route be sure to do the math per the package instructions.

In a large pot with a lid, heat the oil and add the onions. When they begin to sizzle, lower the heat and cook for about 1 hour, stirring occasionally, until the onions are browned — they should be a bit darker than caramelized onions. Add the salt, pepper and cumin, and scrape up any browned bits in the pan.

Add the rice and lentils, stir to coat and add the water. Bring it to a boil, and then lower the heat, cover and simmer for about 30 minutes until the water is absorbed. Remove it from the heat.

Allow it to rest, covered, for another 5-10 minutes. Fluff the mixture with a fork and serve. PJC

Keri White writes for the Jewish Exponent, an affiliated publication where this first appeared.