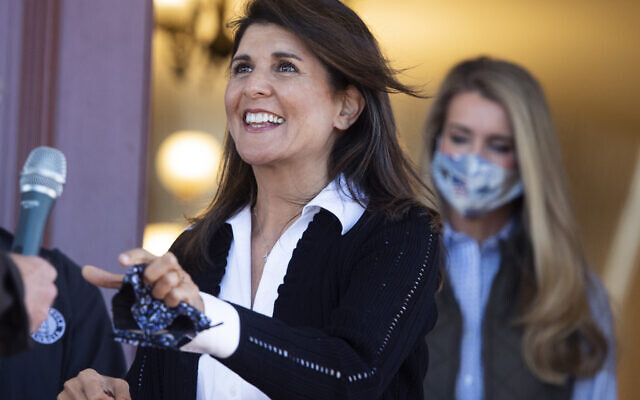 WASHINGTON (JTA) — Nikki Haley has finally and decisively broken with Donald Trump in a move that puts her at the front of the potential Republican presidential pack for moderate conservatives, including pro-Israel Jews who mainly stuck with the party over the past four years because of Trump’s foreign policy.

After serving as his U.N. ambassador and not taking a stand for months on what his lies about election fraud would mean for his legacy, Haley made the final cut on Friday in a Politico interview. Trump’s inflammatory post-election rhetoric, which Democrats argue culminated in the deadly Jan. 6 riot at the U.S. Capitol, was the final straw.

Her break is a risky move: Trump still commands enough loyalty in the party that Republican senators privately told folks they were scared to convict him in his impeachment trial last week.

But Haley, the former South Carolina governor, has a canny sense of when it’s time for conservatives to let go of driftwood. She removed the Confederate flag from the state Capitol after a white supremacist gunned down nine Black churchgoers in Charleston in 2015. The move, which would have sparked outrage a week before the killing, went down without a hitch.

Haley was until now one of the few Trump officials who managed to walk a fine line between distancing herself from some of his outrages and earning his blessing by embracing his agenda. She has also been a star among pro-Israel Republicans for her pledge as U.N. ambassador to “take names” of countries that go against the United States when it backs Israel.

In effect, she had emerged from the Trump years as a political survivor capable of walking that line into the White House. Her clear break from Trumpism is a sign that more Republicans on the fence will need to stake out a side.

Many GOP Jews will be happy with Haley’s decision and could help her with her presidential ambitions.

Haley made fighting anti-Israel policy the centerpiece of her United Nations tenure, removing the United States from the U.N. Human Rights Council because it focused an uneven amount of energy on Israel. She also took the lead in the U.S. decision to cut funding for UNRWA, the U.N.-affiliated body that assists Palestinian refugees, and which Republicans say is perpetuating the conflict. (President Joe Biden plans to reverse both policies.)

Her frontline pro-Israel advocacy has made her extremely popular at the annual American Israel Public Affairs Committee conference, where she always earned the loudest cheers — the mere mention of her name by another speaker guaranteed applause.

She memorably coined the phrase that came to define her U.N. gig at the 2017 AIPAC conference: “I wear high heels. It’s not for a fashion statement, it’s because if I see something wrong I will kick it every single time.”

At the 2019 conference, after she had quit her U.N. job, she used her AIPAC appearance to launch her advocacy website, Stand For America, a typical stage setter for people contemplating a presidential run. The site solicits donations and emails.

She has a very warm relationship with Jewish Republican groups, including the Republican Jewish Coalition (at an RJC event last July, Haley urged Jewish voters to ignore Trump’s coarse conduct and focus on the “results” his policies have yielded).

Jewish Republicans are disillusioned with Trump after the Jan. 6 riot, which attracted explicit displays of anti-Semitism. Fundraising among Jewish donors ahead of 2024 likely will be a hard slog for any presidential candidate who is Trump-adjacent.

“I would certainly hope under any circumstance that our community shows their appreciation, in any endeavor that she undertakes,” Fred Zeidman, a Houston businessman who is a major Republican pro-Israel donor, told the Jewish Telegraphic Agency. The more important effort right now, he said, was to steer the party away from association with Trump’s disastrous final months. “What Nikki is trying to achieve right now is to retake the House and retake the Senate.”

Haley’s 2019 political autobiography, “With All Due Respect,” includes a chapter — and chunks elsewhere in the book — on Israel policy, including her battles with then-Secretary of State Rex Tillerson, whom she depicts as resistant to her advice to quit UNRWA.

She also gives four pages over to a topic that had no bearing on her U.N. responsibilities — the deadly neo-Nazi march in Charlottesville in 2017. Trump’s equivocation upset her enough, she writes, that she called him. She said he should be as unequivocal as she was after the Charleston massacre. He said the two situations differed.

“I replied to the president that the two situations were not really different,” Haley writes.

She said she advised the president, “You have to stop acknowledging the haters.”

She and Trump had a kind of “strange respect between us,” she acknowledged in the book. She describes being on the wrong end of a Trump tweet after attacking Trump at a rally for the candidate she backed in the primaries, Marco Rubio: “The people of South Carolina are embarrassed by Nikki Haley!”

“It was southern woman code,” Haley said. “Three polite words that let the receiver know you mean something not so polite.”

Trump has vowed to return to the political realm in some capacity. But as she told Politico, Haley is focused on moving beyond the debate over his future.