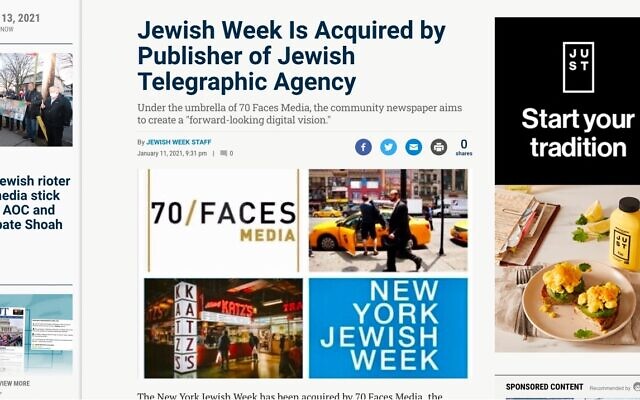 No longer financially viable on its own, the New York Jewish Week — which has provided local news coverage for Jews in the New York City area for 46 years — has been acquired by 70 Faces Media, the nonprofit parent company of the Jewish Telegraphic Agency, Kveller, Alma and My Jewish Learning.

The pandemic hit the New York Jewish Week hard, and the paper’s ad revenues plummeted, according to a report in The New York Times. In July, the paper ceased publishing a print edition and moved its operations entirely online. It also had to lay off employees.

Philissa Cramer, editor-in-chief of JTA, said 70 Faces Media’s acquisition of the New York Jewish Week could be a model for other struggling local newspapers, and a way to keep local Jewish news alive in other communities.

“Jewish media is experiencing the same absolute crisis that other local news has, and it’s been exacerbated during the pandemic,” Cramer told the Times. “To imagine local Jewish communities without robust coverage is a shame, and I’d like to be part of a solution that can imagine a sustainable pathway.” PJC