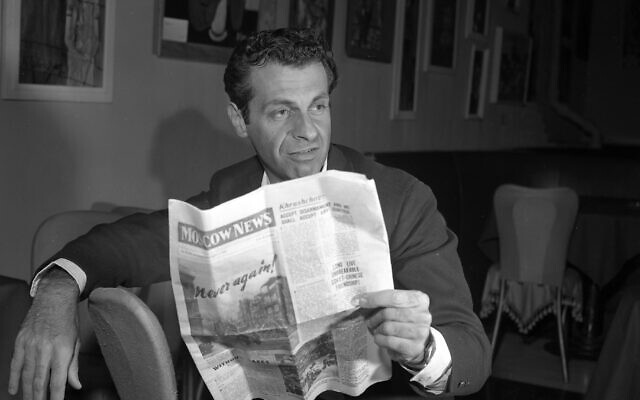 (JTA) — Mort Sahl, a Jewish satirist who was credited with making caustic political and social satire popular in stand-up comedy, died Tuesday at 94.

Often walking on stage holding just a rolled up newspaper, Sahl liked to riff on the headlines of the day in extended improvised monologues. At a time when comedians tended to steer clear of politics, Sahl took aim at politicians and was known to end his sets with the line: “Are there any groups I haven’t offended?”

Steve Allen, the first host of “The Tonight Show,” once introduced Sahl as “probably the only real political philosopher we have in modern comedy.”

Though Sahl was not religious and did not discuss his Jewishness in routines or often in public, he inspired a wave of fellow Jewish stand-ups. Woody Allen named him as a major influence and commented in interviews how Sahl also influenced the fellow Jewish pioneer Lenny Bruce — who would take Sahl’s freeform style and cutting satire to crude new heights.

Sahl was born in Montreal in 1927 to Jewish parents from New York’s Lower East Side and eventually moved to Los Angeles. As a teenager, Sahl dropped out of high school there and tried to enroll in the ROTC program by lying about his age, but his mother found him out after two weeks and brought him home. Sahl was married three times and a had a son, Mort Jr., with his second wife. Mort Jr., died of a drug overdose at age 19 in 1996.

The elder Sahl got his break performing in San Francisco years after graduating from college, performing sets at a club known for attracting an intellectual crowd. His jokes about national politics eventually earned him a following and he started appearing on late night shows and performing in clubs across the country.

After appearing in several movies in the 1950s and early ’60s, his career took a dive after the assassination of John F. Kennedy in 1963, which Sahl came to believe had been orchestrated by the CIA. But he continued to act and perform stand-up into his 90s.

In 1982, Sahl played the role of Werner Finck, a German-Jewish satirist, in a 5-hour TV special. In 2003, the National Foundation for Jewish Culture honored Sahl with the Alan King Award in American Jewish Humor.

But Sahl explained to J. The Jewish News of Northern California in 2004 that he never emphasized his Jewishness on stage because it wasn’t a major part of his upbringing.

“I never stressed it,” he says, “because I didn’t have those kinds of parents. I grew up in a homogenized neighborhood, and was a kind of a mail-order, cardboard Jew.”

Speaking with the paper not long after the premiere of Mel Gibson’s “Passion of the Christ,” Sahl opined on the movie and antisemitism.

“Terrible movie,” he said. “Two hours of unrelieved sadism. But the Romans are nice! I think everyone’s second nature is anti-Semitism, so all the anxiety [over the film] is justified.” PJC