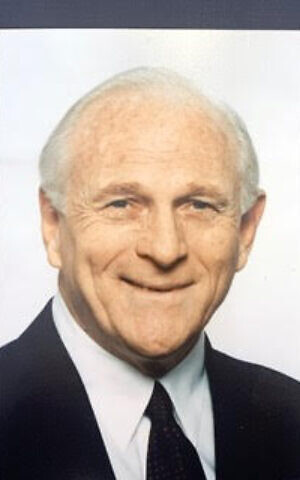 BLUMMER: Morry W. Blummer, on Wednesday, June 23, 2021. Beloved husband of the late Sondra R. (Stutz) Blummer; loving father of Marcy (Larry) Grollman and the late William “Bill” Aaron Blummer; grandfather of Joshua (Veronica) Grollman, Jordan Grollman and Mitchel, Wesley, Kyle and Laine Blummer; great-grandfather of Jonah and Ezra Grollman. Morry was a proud graduate of Allderdice High School. While at Allderdice, he was a three-sport star including captain of the football team, but baseball was his favorite sport. He was signed by the Pirates to a minor league contract by the legendary Branch Rickey. After an injury cut short his playing career, he proudly served in the U.S. Air Force stationed in Greenland during the Korean War. After the war, he was a successful salesman, eventually working up to a national sales manager position. He loved ping pong, punching the speedbag and the Pirates and Steelers. Most of all, he dearly loved Sondra and his family, especially his six grandchildren and two great-grandsons. Graveside services and interment were held at Shaare Torah Cemetery. Contributions may be made to Temple Sinai, 5505 Forbes Avenue, Pittsburgh, PA 15217 or Beth El Congregation of the South Hills, 1900 Cochran Road, Pittsburgh, PA 15220. Arrangements entrusted to Ralph Schugar Chapel, Inc., family owned and operated. schugar.com PJC