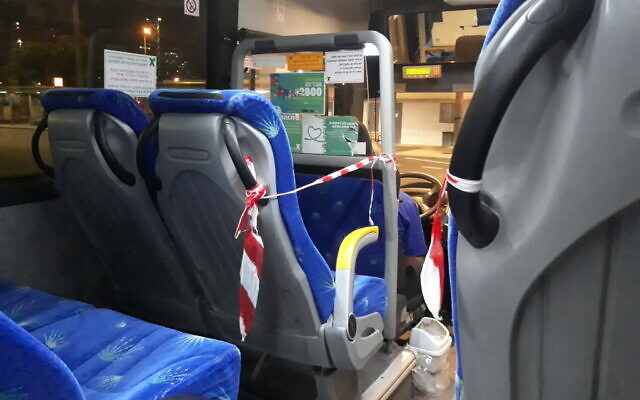 Hebrew media reports said the lockdown backed by ministers in the so-called coronavirus cabinet would likely start in the middle of next week, and last for two weeks. After that period, the reports said, schools would remain closed for another two weeks.

However, the specifics have yet to be finalized, and a full cabinet vote is likely to be held on Sunday.

The initial ministerial vote came as Health Ministry figures showed 20 people had died between 10 a.m. and 6 p.m. Thursday, raising the death toll to 1,075 and underlining worries of Israel’s health system being overwhelmed by an influx of seriously ill patients.

There were 22 deaths in the 24 hours preceding the announcement, topping the previous single-day high of 21.

There have been 144,267 total cases of coronavirus in Israel since the start of the pandemic, with 33,681 active cases as of Thursday night.

The number of patients in serious condition spiked to a record 488, with 143 of them on ventilators. There were an additional 181 patients in moderate condition while the remainder of cases were of Israelis feeling minor to no symptoms at all.

The ministry said that 44,964 tests were carried out on Wednesday, another record high, but the positive rate remained at 9.2%, a figure that has stayed consistently high over the past several days.

The numbers were published as ministers wrapped up a meeting of the so-called coronavirus cabinet, where they voted to push ahead with a three-stage lockdown plan, starting sometime next week.

The plan must still be voted on by the full cabinet, which is slated to meet on Sunday, the Prime Minister’s Office said.

The three stages
Under the scheme, for the first stage will see people confined to within 500 meters of their home, with all schools (except special education) and non-essential businesses closed and all non-essential workers told to stay home. Restaurants will only be allowed to operate delivery service.

In the second stage, some workers will be allowed to return and only travel between cities will be banned. Gatherings will be restricted nationwide according to the red level of coronavirus czar Prof. Ronni Gamzu’s traffic light plan.

The third stage will see a full return to the traffic light plan, which imposes restrictions only in high-infection zones.

A timeline for the stages has not yet been set, though a report claimed the first stage would last two weeks.

Moving from the first stage to the next will be dependent on certain benchmarks being met, the PMO said.

In a statement released during the meeting, Netanyahu said that Israel’s Gamzu and a number of hospital heads raised a “red flag.”

“They said that although the number of serious patients in Israel is still relatively low, it can change in an instant, then the hospitals will not be able to treat them and there will be many serious [cases] and many dead,” he said shortly after the Health Ministry released its latest grim batch of coronavirus statistics.

“They say that action must be taken, but we must take those steps carefully, not recklessly,” he added, saying the ministers would discuss the matter over “many hours” but still come to a decision early enough to give Israelis a chance to “get organized for the holidays.”

According to Channel 12, Netanyahu voiced his support for a country-wide lockdown for the entire fall holiday period, beginning next weekend and continuing until the end of the Sukkot holiday on October 10.

By waiting until the Rosh Hashanah holiday, which starts next Friday evening, Netanyahu will be able to make it back from his trip to Washington for Tuesday’s Israel-UAE normalization agreement signing ceremony before the lockdown is put in place.

The lockdown Netanyahu backed would bar Israelis from traveling beyond 500 meters from their homes and would shutter just about all of the private and public sectors while also closing schools, Channel 12 said.

Gamzu has proposed a less restrictive lockdown, which would only ban intercity travel on some days, with restrictions on gatherings for the rest. The possibility of a nightly curfew was also raised, as a way to allow businesses to continue operating during the day.

Finance Minister Israel Katz and Economy Minister Amir Peretz both argued in favor of the more-lenient nighttime curfew option so as not to hinder the economy too severely, according to Channel 12.

Ministers were also reportedly split on guidelines for prayer gatherings, with the approach of the High Holidays, when Jewish Israelis normally pack synagogues.

Ultra-Orthodox ministers Yaakov Litzman and Aryeh Deri pushed Netanyahu to come up with a separate policy that would allow indoor prayer services during the holidays, even if a lockdown was put in place.

They asked for all synagogues to be treated as if they were in “orange” locales in Gamzu’s traffic light plan which currently allows for indoor crowding of up to 25 people.

“You’re ruining the holidays for us,” Channel 12 quoted Litzman as having barked at Netanyahu.

The premier reportedly responded, “I’m not ruining the holidays, but acting to prevent further infections.”

Earlier Thursday, Gamzu presented his plan to the coronavirus cabinet, recommending stricter restrictions on movement from the day before the Jewish New Year, on September 17, until the end of the fall holiday period on October 12.

Gamzu told the ministers he is hoping the widespread measures will drop the number of daily cases from their current 3,500 to 600-700 infections — the approximate level Israel was at the height of the first wave of the pandemic. PJC