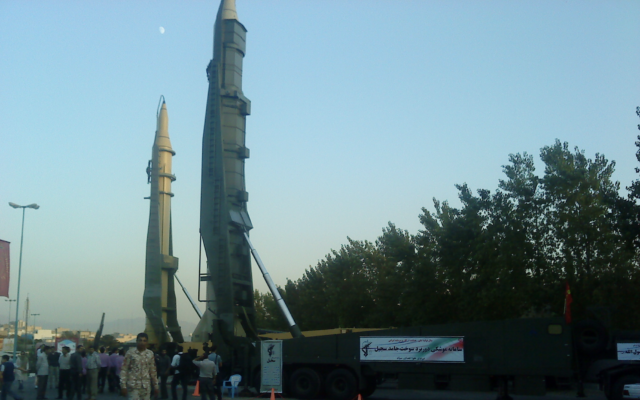 TEHRAN, Iran — Thousands of Iranians marched in rallies in the capital Tehran on Friday to mark Jerusalem Day, with Iran’s leaders and top generals railing against Israel and evoking the Jewish state’s destruction. It was the first time such marches were held since before the coronavirus pandemic.

Iran has been marking the day, the last Friday of the Muslim holy fasting month of Ramadan, since the start of its 1979 Islamic Revolution led by the late Ayatollah Ruhollah Khomeini. It is also known as al-Quds Day, after the Arabic name for Jerusalem. Iran claims it is an occasion to express support for the Palestinians.

State TV later showed a variety of ballistic missiles on display at the rally, which it described as “Israel hitters.”

Iran’s hardline president Ebrahim Raisi addressed the rallies, praising Palestinian protesters who have regularly clashed with Israeli police and troops recently in Jerusalem and the West Bank as the vanguard of anti-Israel resistance.

“This great movement that we are witnessing today in the form of protests is a symbol of the solidarity of the Muslim people that will lead to the destruction of the Zionist regime,” he said, according to state-run outlet ISNA.

Iran does not recognize Israel and supports Hamas and Hezbollah, terror groups that like Tehran call for the Jewish state’s destruction. Israel views Iran as its top enemy in the Middle East.

The rallies all headed to Tehran University, where the ceremony ended at Friday’s noon prayers. Similar rallies were held in other major cities, including Mashhad, Isfahan and Tabriz, as well as in Syria, Pakistan and Bahrain.

Many high-ranking Iranian officials attended the rally in Tehran, including powerful IRGC commander, Gen. Mohammad Salami, who issued a warning to Israel.

“You know we are people of action and reaction. Our answers are painful and we set the stage for our goals. We will not give up on you, wait; You have seen our answers,” Salami was quoted as saying by the Mehr news agency.

He also claimed Israel has sowed the seeds of its own destruction.

Supreme Leader Ayatollah Ali Khamenei in a speech broadcast live on television condemned unnamed Arab states in the Persian Gulf for normalizing ties with Israel, referring to the United Arab Emirates and Bahrain.

“We condemn the treacherous move to normalize relations” with Israel, he said, and reiterated Iran’s support for the Palestinian cause.