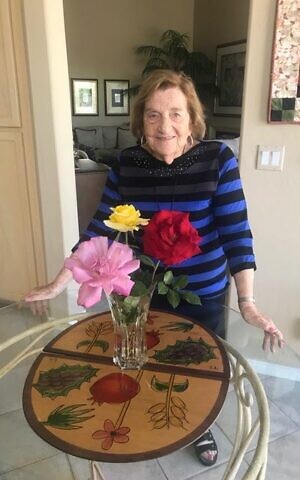 SILBERMAN: Marianne Silberman, a native of Pittsburgh passed away on Monday, Aug. 16, 2021, at the age of 91, in Scottsdale, Arizona. Marianne was born in Germany in 1930 to Sigmund and Johanna Eichengruen Silberberg. She had one older brother, Heinz. In 1937, the family left Germany to escape the beginning of the Holocaust and settled in Providence, Rhode Island. Marianne’s mother passed away when she was 11 years old. Her father remarried (Martha) and moved to Pittsburgh to open a small bakery in Squirrel Hill: Silberberg’s Bakery. Marianne worked at the bakery while in high school and eventually made it her lifelong career, managing the business portion of the bakery. It was Marianne who decided that every child who came into the bakery would receive a free cookie of choice which resulted in millions of smiles and memories still to this day. Marianne married Herbie and together welcomed their only son, Lenny. Marianne had a passion and commitment to the Jewish community highlighted by her presidency at Congregation Beth Shalom. As a lifetime board member, she was also a Sisterhood member. She, along with Herbie took pride in their philanthropy by donating baked goods to Jewish and non-Jewish organizations. Marianne also served as president of the Sinai group of Hadassah and past vice president of the Pittsburgh chapter of Hadassah. She was a life member of Hadassah, National Council of Jewish Women and Riverview Ladies Auxiliary. After retiring in 1996, the Silbermans moved to Scottsdale, Arizona. They joined Temple Chai and Marianne became involved in the Brandeis National Committee as a board member. Marianne enjoyed the tradition of celebrating Jewish holidays with family and friends. Four generations always enjoyed her magnificent cooking and her table was always set with the silver cutlery that was brought from Germany. Marianne was known for her sweet, kind and fun-loving spirit. She is preceded in death by her husband, Herbert and brother, Heinz. Surviving members of the family include: son, Lenny Silberman; nieces and nephews Joanie Small, Linda Denmark, Mark (Sharon) Silberberg, Michael (Wilma) Silbermann, Vivian Marcus, Robert (Robin) Randall, Judy McAllister and Nancy (Russell) Kovach; great-nieces and nephews: Jessica (Greg) Powers, Jeremy (Sandy) Small, Howie Denmark, Joel Denmark, Adam Silberberg, Jason Silberberg, Aaron Silbermann, Elaine (Chris) Strand, Annalee (David) Bart, Lyndsey Kovach, Jennifer Kovach, CJ McAllister, Anthony (Natalie) Marcus and Judy (Alan) Isherwood. Marianne was also a great aunt to Gabrielle Sikes, Isabel and Jacob Powers. Services were held at Ralph Schugar Chapel, Inc. on Friday, Aug. 20, 2021. Interment was held at Beth Shalom Cemetery. Contributions may be made to Congregation Beth Shalom, 5915 Beacon Street, Pittsburgh, PA 15217, bethshalompgh.org. Arrangements entrusted to Ralph Schugar Chapel, Inc. family owned and operated. schugar.com PJC