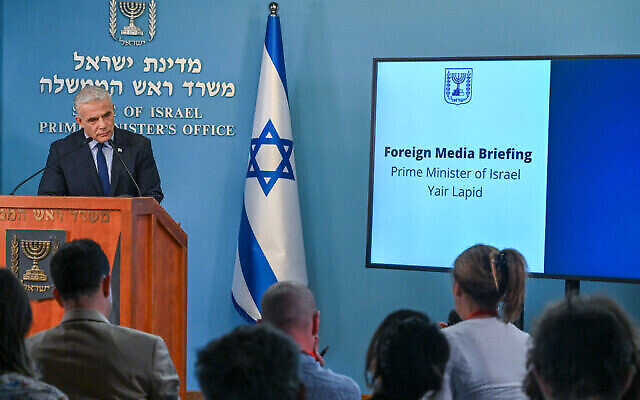 Prime Minister Yair Lapid speaks about Iran at a security briefing for the foreign press at the Prime Minister's Office in Jerusalem, Aug. 24, 2022. (Kobi Gideon / GPO)

Prime Minister Yair Lapid said Thursday that Israeli pressure tactics on the United States over the Iran deal have already had some positive effects.

“The Americans accepted a large part of the things that we wanted them to include in the drafts,” Lapid said in response to a question at a press conference at the start of a Yesh Atid faction meeting. “It is a welcome change, and the dialogue with them is good and we will continue it.”

Lapid reiterated that “the current deal is a bad deal,” and noted the raft of intensive Israeli efforts this week to influence the negotiations, which have seemingly brought Tehran and world powers closer than ever to signing a deal.

The prime minister pointed both to the trip to D.C. this week by Israeli national security adviser Eyal Hulata for “very intensive discussions” on the issue and to Defense Minister Benny Gantz’s visit to the U.S., which began on Thursday.

Lapid’s comments came just hours after a report in Walla claiming that Israeli officials are slightly less worried about the possibility of the U.S. granting major concessions to Tehran in the wake of Hulata’s visit to D.C.

Walla cited a senior Israeli official as saying that the U.S. “hardened their position” in response to Iranian suggestions on the latest draft proposal of the nuclear deal being negotiated in Vienna between Tehran and world powers. The report also suggested that the series of public pronouncements emerging from Israel in recent days helped pressure the White House against making concessions.

The official told Walla that the U.S. assured Hulata that it would not give in to Iranian demands over ending investigations by the International Atomic Energy Agency into its suspected nuclear activities nor would it lift sanctions on companies linked to Iran’s Islamic Revolutionary Guard Corps.

Lapid, Gantz and opposition leader Benjamin Netanyahu have all made pointed public comments in recent days warning of the danger of the emerging deal. Gantz departed Wednesday evening for a meeting on Thursday with the CENTCOM chief in Florida, followed by meetings in Washington on Friday expected to center on Iran.

Just before departing, Gantz tweeted that the goal of his trip was “to send a clear message in regard to the negotiations between Iran and powers on the nuclear deal: A deal that does not knock Iran’s abilities back by years and does not restrain it for years ahead, is a deal that will harm global and regional security.”

Channel 13 news reported on Wednesday that Gantz will not meet with U.S. Defense Secretary Lloyd Austin, since Austin will not be in D.C. during his visit. The network also claimed that the White House had rejected a request for a phone call between Lapid and U.S. President Joe Biden, who is on vacation this week in Delaware and South Carolina, although the report said a conversation will be arranged eventually.

On Wednesday, Tehran said it had received Washington’s response to its latest demands over the deal, a day after a day after the U.S. said Iran had agreed to ease key demands that had held up the revival of the 2015 deal.

White House National Security Council spokesman John Kirby declined to characterize the administration’s response to the latest proposal, but noted “we are closer now than we were even just a couple of weeks ago because Iran made a decision to make some concessions.”

Talks between Iran and world powers — and indirectly with the U.S. — have ramped up in recent weeks after months of stalling following Iranian demands that were rejected by Washington. According to an anonymous U.S. official, Iran’s draft does not include its long-held demand that the U.S. lift the terrorism designation of Iran’s Revolutionary Guards Corps and that the International Atomic Energy Agency close its investigation into unexplained traces of uranium at three undeclared sites.

EU-coordinated negotiations on reviving the 2015 deal — which the Trump administration walked away from in 2018 — began in April 2021, came to a standstill in March and picked up again in August. The Biden administration has repeatedly said it believes diplomacy is the best way to resolve the crisis.

In a briefing to foreign reporters on Wednesday, Lapid urged the U.S. and the European Union to back away from the emerging deal, claiming it did not meet Biden’s own red lines as it won’t prevent Iran from becoming a nuclear state.

“In our eyes, it does not meet the standards set by President Biden himself: preventing Iran from becoming a nuclear state,” Lapid said, while also attempting to downplay any rift between Jerusalem and Washington or Europe.

Lapid panned the EU’s negotiating position, claiming that it had reneged on its declaration of “take it or leave it” when it presented a supposed final draft of the deal, allowing the Iranians to submit counterdemands and changes.

Netanyahu also voiced his staunch opposition to the deal on Wednesday, saying that the emerging new agreement is even worse than before.

“The terrible deal with Iran… casts a heavy shadow on our security and our future,” Netanyahu told reporters in Tel Aviv.

Israel has long opposed the deal, arguing that Iran is seeking to build a nuclear bomb, and has published intelligence it says reveals the Iranian weapons program. Iran has denied any nefarious intentions and claims its program is designed for peaceful purposes, though it has recently been enriching uranium to levels that international leaders say have no civil use. PJC

Agencies contributed to this report.