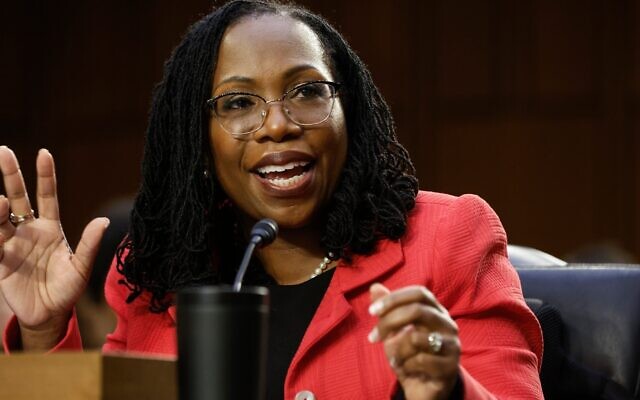 WASHINGTON (JTA) — Whether he meant to or not, Republican Sen. Ted Cruz gave Ketanji Brown Jackson, President Joe Biden’s Supreme Court nominee, an opportunity for a breather in the middle of a contentious day of confirmation hearings on Tuesday.

Cruz, who spent most of his 30-minute questioning session trying to corner Jackson on issues such as critical race theory, asked what Jackson meant when she says she praises the “social justice” values that are exemplified by the private school her children attend.

In her response, Jackson said she was proud to serve as a board member — and opened up about the school’s origins as a Jewish-Black civil rights alliance.

“Georgetown Day School has a special history that I think is important to understand when you consider my service on that board,” Jackson told Cruz.

The school was founded in 1945 in Washington, D.C., at a time at which by law there was racial segregation in this community. Black students were not allowed in the public schools to go to school with white students. Georgetown Day School is a private school, that was created when three white families — Jewish families — got together with three Black families and said that despite the fact that the law is set up to make sure that Black children are not treated the same as everyone else, we are going to form a private school so that our children can go to school together. The idea of equality — justice — is at the core of the Georgetown Day School mission.

Judge Jackson was asked about her position on the board of trustees at Georgetown Day School – the first racially integrated school in the nation’s capital.

Georgetown Day School’s history page on its website notes that it was founded in 1945 by seven — not six — families, and that it was the first integrated school in the nation’s capital, but does not add detail.

There appear to be at least three Jewish, or partly Jewish, families involved in its founding: Edith Nash (née Rosenfels), who was a Jewish poet married to Philleo Nash, an anthropologist and a senior official in Democratic administrations, whose daughters attended the school; the parents of Arthur Goldschmidt, who became a noted scholar of Middle East history; and the parents of Judith Martin (née Perlman) who launched the famed “Miss Manners” etiquette column.

The school sustained a Jewish flavor. Nash, who went on to become the school’s second director, once recalled that in the 1950s, the school had an annual Seder Lunch, a parent-student event to mark Passover. Next month, the school’s calendar features Passover Freedom Assemblies for the entire lower and middle schools.

The school’s most influential director, Gladys Stern, who led the establishment from 1975-1996, was also Jewish.

The school, which is on spring break, did not return a request for comment.

On Monday, the first day of her testimony, Jackson credited her Jewish high school debate coach, the late Fran Berger, with instilling her with confidence and making her believe she could succeed as a lawyer. Jackson also credited Supreme Court Justice Stephen Breyer, who is Jewish, for whom she clerked and whom she would replace. PJC