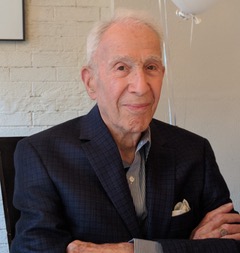 KAUFMANN: Karl Jacob Kaufmann, Jr. passed away on May 10, 2022, in Bethesda, Maryland, at the age of 100. Born in Pittsburgh on June 19, 1921, to Karl J. Kaufmann and Ruth Helen Wolf Kaufmann, he attended Shady Side Academy, graduating in 1939. During World War II, he left the University of Michigan, Ann Arbor, to join the Army, training as a radio technician in Syracuse, New York, where he met the love of his life, Elaine Lockmyer (1924-2009). Following his military service in Europe, they were married on Dec. 28, 1946, in Syracuse. He began his career in retail at Gimbels in Pittsburgh. A shrewd negotiator with impeccable taste, he was well-known and widely respected in the industry, ultimately serving as vice president and women’s merchandise manager at Hamburgers in Baltimore, Kennedy’s in New England and Harris & Frank on the West Coast. Following his retirement, he created websites for his children’s small business and for nonprofits, and volunteered for Goodwill Industries and the Red Cross. Funeral services and interment were private. Donations in his memory may be made to the Red Cross or So Others Might Eat. Arrangements entrusted to Ralph Schugar Chapel, Inc., family owned and operated. schugar.com PJC