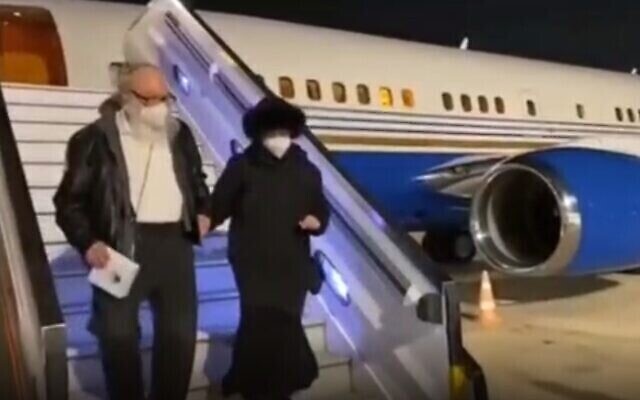 Jonathan Pollard, the former U.S. Navy analyst convicted of spying for Israel, arrived in Israel early Wednesday morning, 35 years after he was first arrested and weeks after his parole ended.

Pollard, 66, arrived in Israel with his wife, Esther. He had long expressed a desire to move to Israel, which granted him citizenship in 1995.

The couple were met on the tarmac by Prime Minister Benjamin Netanyahu, who gave Pollard his new Israeli paperwork and greeted him with the traditional Jewish blessing for when something new happens.

The Pollards walked slowly down the aircraft steps. Pollard then took off his mask and got down on his knees to kiss the tarmac. Esther did the same and was helped up by her husband, as Netanyahu waited alongside.

“Now you can start life anew, with freedom and happiness. Now you are home,” the prime minister said.

Pollard responded: “We are excited to be home at last. There is no one who is more proud of this country or its leader than we are. We hope to become productive citizens as soon as possible.”

The Pollards flew in a private jet from Newark International Airport in New Jersey to accommodate Esther’s health issues, the Israel Hayom daily reported. She has been battling cancer.

Before landing, Pollard was invited by the plane’s pilots into the cockpit, where air traffic controllers at Ben Gurion International Airport greeted him in Hebrew.

Diaspora Affairs Minister Omer Yankelevich of the Blue and White party welcomed Pollard to Israel, writing on Twitter, “Jonathan, how good it is that you came home.” Finance Minister Yisrael Katz of Likud said, “Welcome home to Israel.”

The Pollards are expected enter quarantine, which is required of all international arrivals, and move to Jerusalem.

Israel Hayom’s chief editor, Boaz Bismuth, broke the news of Pollard’s arrival by posting a photo of the Pollards on the flight shortly before their landing. Israel Hayom is considered to be a supporter of Netanyahu and is owned by Sheldon Adelson, who has had close ties to U.S. President Donald Trump and who in the past pushed for Pollard’s release.

According to the Haaretz daily, the Pollards flew to Israel on a plane owned by Adelson’s Las Vegas Sands Corps.

Pollard’s lawyer, Eliot Lauer, told The Times of Israel, “The event speaks for itself. A dream realized after 35 very difficult years.”

Pollard’s parole ended last month. Afterward, he readied to move to Israel with his wife, who was undergoing rounds of chemotherapy treatments for breast cancer, according Lauer.

Pollard, 66, was a U.S. Navy intelligence analyst in the mid-1980s when he made contact with an Israeli colonel in New York and began sending U.S. secrets to Israel in exchange for tens of thousands of dollars.

Pollard, who is Jewish, passed thousands of crucial U.S. documents to Israel, straining relations between the two close allies.

He was arrested in 1985 and was sentenced to life in prison two years later, despite pleading guilty in a deal his attorneys expected would result in a more lenient sentence.

He was eventually released in 2015, but was kept in the United States by parole rules and not allowed to travel to Israel where his wife, whom he married after he was jailed, lived.

He remained subject to a curfew, had to wear a wrist monitor, and was prohibited from working for any company that lacked U.S. government monitoring software on its computer systems. In addition, he was restricted from traveling abroad.

Last month, Pollard released photos taken of his wife cutting the electronic monitor bracelet off of his wrist as his five-year parole was terminated. He also issued a statement thanking Esther for standing by his side for three decades.

Lauer told The Times of Israel that the termination of his parole likely required a “wink and a nod” from the highest levels of the White House.

Pollard’s move to Israel comes despite his previous accusations that Israel had not done enough to secure his release.

His capture and his subsequent treatment — by Israel, which threw him out of its Washington embassy and into the arms of waiting FBI agents, and by the United States, which agreed to a plea bargain and then sentenced him with uncommon severity — left him deeply embittered.

Israel’s October 1985 raid on the Palestinian Liberation Organization’s Tunis headquarters that killed around 60 people was planned with information from Pollard, according to CIA documents declassified in 2012.

Netanyahu spoke to Pollard by phone last month, telling him, “We’re waiting for you.” PJC