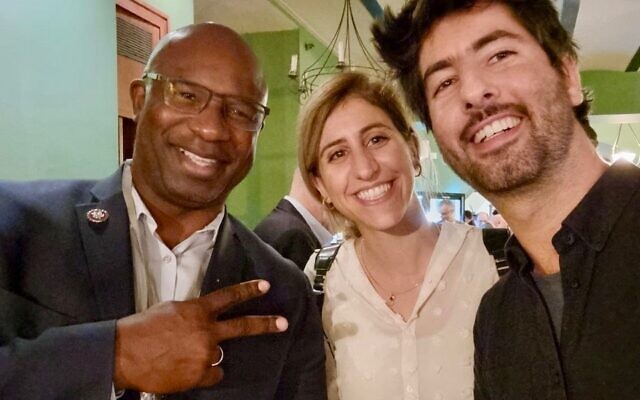 Rep. Jamaal Bowman, D-Bronx/Westchester, left, meets with Sally Abed and Alon-Lee Green of Standing Together, a progressive Jewish-Arab grassroots movement, during his visit to Israel and Palestinian-controlled areas as part of a Congressional delegation arranged by J Street, Nov. 8, 2021. (Via Twitter/JTA)

WASHINGTON (JTA) — Jamaal Bowman, one of the six-member “Squad” considered the most Israel-critical faction in the U.S. House of Representatives, is currently on a tour of the country with a liberal pro-Israel group and met with its foreign minister, Yair Lapid.

Israeli media reported that a number of progressive Democrats are on the tour organized by J Street, a group that advocates for a two-state solution and is harshly critical of Israel’s settlement activity, but which also promotes Israeli culture and values in its activities and opposes the boycott-Israel movement.

Among the others on the trip is Marc Pocan, a Wisconsin Democrat who, like Bowman, was outspoken in criticizing Israel during its Gaza conflict this summer. But Bowman’s inclusion is particularly noteworthy, given the New York Democrat’s alliance with a prominent group of legislators that includes some who openly back the boycott-Israel movement. The Squad comprised the most outspoken critics of Israel during the May conflict.

Bowman has stood apart from the Squad in not joining the calls to reduce or end defense assistance to Israel, and in being the only Squad member to vote for an extra $1b in funding to replenish the Iron Dome anti-missile system depleted during the Gaza conflict. Bowman’s district covers parts of Westchester and the Bronx, and has a substantial Jewish population. His predecessor, Eliot Engel, whom he ousted in a primary, was one of the most pro-Israel Democrats in Congress.

Bowman is endorsed by the Democratic Socialists of America, which has embraced the movement to boycott, divest and sanction Israel. At least one DSA chapter, in Madison, Wisconsin, has called for Bowman’s expulsion from DSA for voting for defense funding for Israel. The chapter insinuated in a Nov. 1 statement that Bowman was pandering in his votes. “Career aspirations should not be allowed to compromise DSA’s strong stance of support for Palestinian national liberation,” it said.

Israeli media said the visit this week is the first time in at least four years that J Street has scored meetings with Israeli government officials. Former Prime Minister Benjamin Netanyahu, who was in office from 2009 until this year, was hostile to the group. The current coalition, led by Lapid and Israeli Prime Minister Naftali Bennett, has made a priority of repairing relations with liberal Americans.

In a tweet marking the meeting, Lapid did not mention the names of the lawmakers or J Street. “This evening at the Knesset, I met with a delegation of Democratic members of Congress,” he said Monday. “I thanked them for supporting the replenishment of the Iron Dome missile defense system, and we discussed the importance of continuing to strengthen the US-Israel relationship.”

The tour will also include meetings with Palestinian leaders. Also participating is Rep. Rosa DeLauro, D-Conn., the chairwoman of the powerful Appropriations Committee. PJC