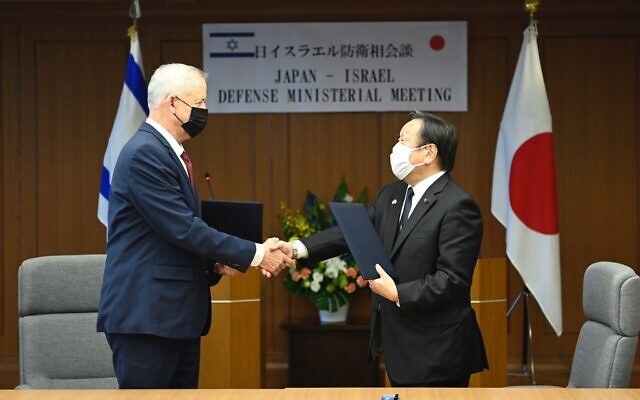 (JTA) — Israel and Japan signed a defense agreement allowing for greater military equipment and technology cooperation on Tuesday, in a sign of closeness as they mark the 70th anniversary of diplomatic relations this year.

Israel Defense Minister Benny Gantz’s Japan trip comes at the tail end of a visit to the United States, where he discussed Iran’s nuclear program and other security issues with top officials, and as Japan faces heightened tensions in the Pacific following Nancy Pelosi’s August visit to Taiwan, a self-ruled democracy that Beijing claims as its own. Since Pelosi’s visit, China has escalated military exercises around Taiwan and launched missiles in waters close to Japan, worrying officials in the region that China could continue behavior that threatens the status quo and stability of the region.

Japan announced plans on Wednesday to increase its defense budget and develop longer-range missiles to counter threats from China and Russia.

The agreement, officially an expansion of an earlier defense agreement signed with Israel in 2019, helps Japan push its goal of achieving a “free and open Indo-Pacific,” said Defense Minister Yasukazu Hamada, according to the Associated Press. Gantz said the new agreement “will strengthen the defense capability of each country as well as our joint contribution to peace and stability in our regions and all over the world.”

The agreement is significant for Israel as it continues to weigh how to strike the right balance in its relationships between China, the United States and other Western allies. China has firmly backed Russia in its invasion of Ukraine and in June threatened to start a diplomatic spat after the Israeli newspaper the Jerusalem Post published an interview with Taiwan’s foreign minister. But China was also Israel’s largest source of imports last year, surpassing the United States. PJC