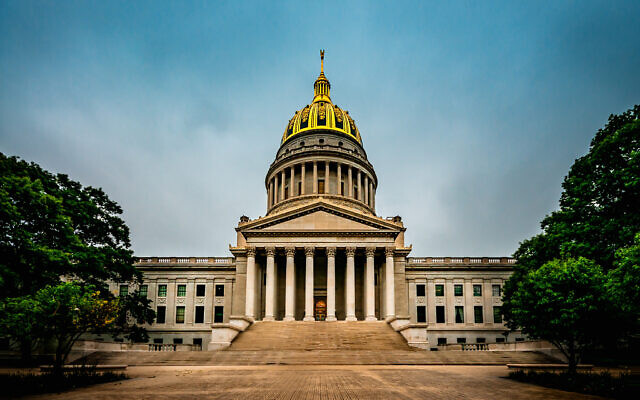 (JTA) – When West Virginia lawmakers opened a discussion about proposed “critical race theory” legislation on Monday, it didn’t take long before the topic of conversation turned to Jews.

West Virginia’s House of Delegates was debating legislation along the lines of laws considered or passed in a slew of other states, to prohibit classroom instruction that could make students “feel discomfort, guilt, anguish or any other form of psychological distress because of the individual’s race, ethnicity or biological sex.”

A retired public school teacher took the floor to argue against the bill and described a hypothetical objection to a hypothetical lesson to show how the law could backfire.

“What if I am teaching about the Holocaust and a parent takes issue because [the parent believes] only 6,000 Jews were killed, not 6 million?” Jenny Santilli, an adjunct professor at Fairmont State University and retired public school Spanish teacher in the state, asked the House Education Committee.

“But that’s not race,” replied the committee’s chair, Republican Joe Ellington, in audio of the session. “That has nothing to do with race. That’s not race.”

Santilli pushed back. “Jews are considered — they are classified as a race, though,” she said.

“Well, see, here’s a perfect example,” Santilli said, before Ellington cut her off to move the conversation on.

Ellington’s voice was identified on the audio by West Virginia journalist Kyle Vass, who was present at the session. Ellington, who did not author the legislation, did not return a Jewish Telegraphic Agency request for comment.

The West Virginia bill is nearly identical in wording and scope to more than a dozen other so-called anti-”Critical Race Theory” bills that have been debated and sometimes passed in statehouses over the last few months. Their proponents have chiefly focused their attention on race and gender theory. In a speech promoting an earlier version of the bill, West Virginia state Senator Mike Azinger, a Republican who attended a rally outside the U.S. Capitol shortly before the Jan. 6, 2021, attack, said its main goal was to defeat “Marxism” and “Communism,” which he contended were the true backers of “critical theory.”

These debates have also directly involved Jews and Holocaust education. A Jewish lawmaker in Wyoming recently spoke out against a similar bill by saying he “cannot accept a neutral, judgement-free approach” on the Holocaust, and the subject of how to teach the Holocaust in the presence of such laws has also emerged as a debate point in Indiana, New Hampshire and other states.

“I don’t think this particular piece of legislation directly impacts us as Jews (though it may be argued as I would that such legislation being proposed could have a chilling effect on teaching the Holocaust),” Rabbi Victor Urecki, one of just six rabbis in West Virginia, told JTA via email. He said legislation like S.B. 498 “is more a sad reflection of the kind of politics our state is witnessing. And for people like myself, it is not good.”

Urecki, who leads B’nai Jacob Synagogue in Charleston, had tweeted about the statehouse debate, calling the question of Jews and race “complicated” — and saying that complexity offered a strong argument against the bill.

“The fact that there is confusion means we probably need to expand education not limit it like our legislators in West Virginia are trying to do,” he wrote.

The conversation about Jews represented only a small portion of lawmakers’ debate over the bill, which advanced after the education committee passed an amended version nearly along party lines (one Republican voted with Democrats against it). On Wednesday, the House Judiciary Committee amended the bill yet again — to remove the provision prohibiting instruction that causes “discomfort” as well as to remove the bill’s definition of “race.”

The West Virginia Commission on Holocaust Education, first established in 1998 to promote Holocaust education and awareness in the state, has spoken out about similarly worded bills on social media before. In a 2021 Facebook post, referencing a story about a Texas school administrator who had advised his staff that their state’s new CRT law meant they would have to teach “opposing” views on the Holocaust, the commission said, “This incident proves the importance of our work and exemplifies the ongoing need for education in our schools and community.”

The commission has not issued any statements on S.B. 498 or on Ellington’s contention that Jews are not a race. A JTA request for comment to chair Marc Slotnick returned an out-of-office email.

The broader question of whether Jews should be considered a race is a weighty topic, both inside and outside of such legislation. Last month Whoopi Goldberg ignited a firestorm of controversy, and was briefly suspended from “The View,” after asserting on-air that the Holocaust wasn’t about race. Hitler frequently wrote and spoke of the Jewish people as a race, and characterized his genocide of the Jewish people as a race extermination project. PJC