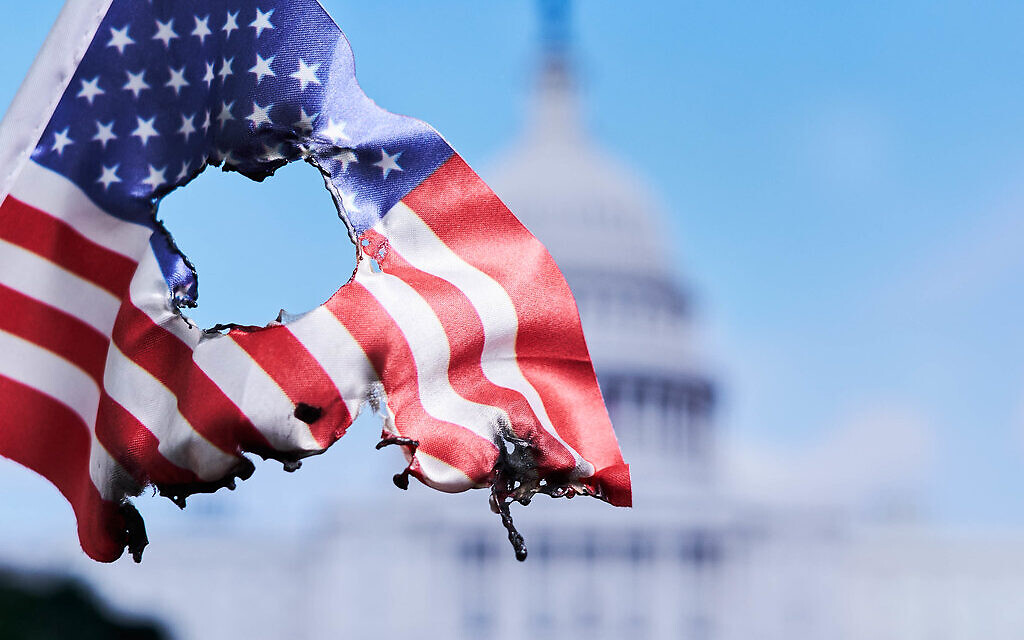 On Jan. 6, 2021, in the midst of unfolding chaos — the sounds of gunfire and shattering glass echoing around me — I made one of the toughest phone calls of my life. I FaceTimed my 27-year-old son and 24-year-old daughter, Clay and Addie, to see their faces and to tell them how much I loved them. While I tried hard to steady my voice and project some semblance of confidence, I had never experienced the kind of terror I felt in that moment.

Let’s be clear on what took place last week: Domestic terrorists — armed with guns, improvised explosive devices (IEDs) including pipe bombs and Molotov cocktails, tear gas and other weapons — stormed the United States Capitol and brought democracy to a halt. Breaching one layer of security after another, they reached the doors of the House chamber — pounding on the doors and breaking glass to try to force their way in.

As revealed by the images that have since been broadcast across our country and around the world, a thin line of officers had to rely on their own bodies and a makeshift barricade of nearby furniture to keep the violent mob from overrunning them and breaking into the House chamber — an outcome which, according to every indication, would have resulted in a massacre. It’s a miracle that more people didn’t lose their lives. As Reuters journalist Tim Bourg stated, “I heard at least three different rioters at the Capitol say that they hoped to find Vice President Mike Pence and execute him by hanging him from a Capitol Hill tree as a traitor. It was a common line being repeated. Many more were just talking about how the VP should be executed.”

Vice President Pence, Speaker Nancy Pelosi and the representatives on the floor were escorted out as the mayhem broke out. But those of us up in the gallery found ourselves trapped. Officers trained their weapons on the doors behind us. Feeling a sharp surge of panic as I tried to process what was happening, I sheltered under my seat. My colleague and friend Rep. Jason Crow of Colorado — a veteran who was awarded the Bronze Star for valor in combat — gripped my hand and assured me that we would make it out alive.

In the tension of the moment, I lost track of time.

I couldn’t tell whether five or 30 minutes had passed since the officers had shouted instructions to retrieve gas masks under our seats and start crawling toward escape on the far side of the gallery. Finally, we were able to evacuate under their protection.

Members who had served in the military and had experience with gas masks from their days in combat — Rep. Crow, Rep. Ruben Gallego and others — helped civilians adjust the equipment. With officers leading the way, we filed out through the long, labyrinthine hallways of the Capitol, eventually reaching our secure location — a large committee conference room.

We stayed sequestered in that location for hours as Capitol Police worked to regain control and track down all those who had spread out across the complex. Photos and videos captured by resolute journalists show the nature of these individuals and the ideology that motivated them: the neo-Nazi wearing clothing emblazoned with “Camp Auschwitz” — only one of myriad anti-Semitic and racist symbols and paraphernalia proliferating throughout the crowd; the nooses left hanging across the complex, and the gallows the perpetuators had set up outside; the Confederate flags carried inside the Capitol; the white supremacist “OK” and Nazi salutes; the phrase “Murder the media” etched into one of the Capitol’s doors; acts of theft, vandalism and desecration committed in offices and on the floor of the chamber; and, most importantly, the violence — violence resulting in the deaths of five people and scores of serious injuries, including the death of a brave Capitol Police Officer, Officer Brian Sicknick, who died protecting his country against those who would betray it.

Those who attacked the Capitol were not patriots. They are traitors with blood on their hands. They must be treated as such and prosecuted to the fullest extent of the law.

But to pretend that this event somehow happened in a vacuum — the work of the individuals who participated in the physical breach alone — would be profoundly false.

Earlier that same day, after all, the president had whipped the crowd into a frenzy, reiterating his false and destructive claims that the election had been stolen and telling his supporters to “walk down to the Capitol” and saying, “Our country has had enough. We’re not going to take it anymore.” “Fight!” he told them. After lying for months about the election and the possibility of overturning the results, the president and those objecting to the election’s certification in Congress had led their supporters to expect an impossible outcome.

When the mob stormed the Capitol that afternoon, they were trying to prevent us from doing our constitutional duty. But late that night, after midnight and into the early hours of the next morning, I was back on the House floor with my colleagues to do my duty. Critically, Congress was interrupted but not stopped. The will of the American people prevailed.

I believe we must take immediate steps to ensure that this president does not do further damage to our democracy in the last weeks of his term. But these immediate steps, while necessary, are insufficient. Once this chapter has passed and the new administration is in place, my colleagues and I must work to make our democracy stronger over the long run, to address the culture of violence, xenophobia and intimidation that has taken root in our society. And, regardless of political affiliation, we must all make clear that what happened this week will never be allowed to happen again.

Our country deserves better. The attack on the Capitol was an attack on our nation and an insult to every American. We must, and we will, rise above it. PJC

Congresswoman Susan Wild was the first woman elected to serve Pennsylvania’s Seventh Congressional District in the House of Representatives and the only Jewish federally elected Pennsylvania official. The former Allentown solicitor lives in the Lehigh Valley. PJC