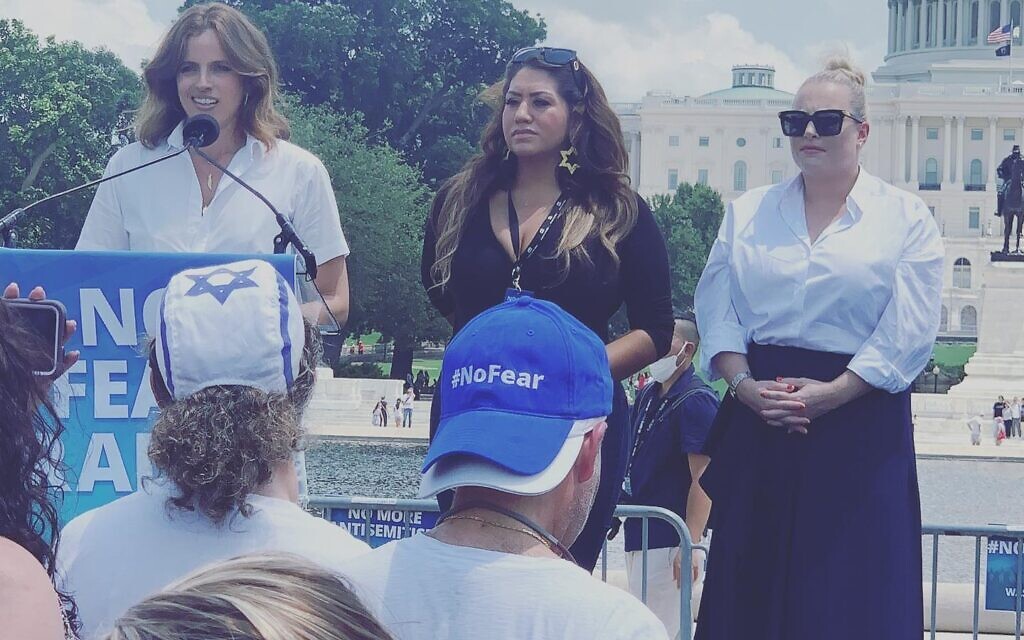 Noa Tishby, Rep Alma Hernandez and Meghan McCain at the "No Fear" rally on July 11 (Photo courtesy of Julie Paris)

When Nazi tanks surrounded Warsaw, my father related in a rare moment of frustration, the Jews were in shul arguing over who should get “shlishi” (the honor of being called up third to the Torah).

It was a story I thought about often on Sunday, on Tisha b’Av. The day marks the destruction of our Temple in Jerusalem and the beginning of exile, the day our sages teach was brought about by our anger at each other. And it’s a story I couldn’t shake from my head this past month as our small team of organizers worked nonstop to inspire Jews and our allies to join us in Washington, D.C., for a rally against antisemitism.

Critics and doubters awaited us at every turn.

We were criticized for asserting that anti-Zionism was a form of antisemitism. How dare we include groups who praised Donald Trump, many asked. How dare we exclude groups who call for an end to the Jewish state? Cynical left-leaning Jewish publications ran articles claiming that this rally would be a right-wing gathering, warning their readers to stay away.

We were criticized for having a diversity and inclusion statement. Certain right-leaning Jewish leaders circulated concerns by email and social media, arguing that the rally had been compromised by the left. How dare we include groups who use terms like “occupation,” they asked. How dare we exclude groups who call for hatred or violence?

And those were just the ideological battles. Every day we received grief for giving not enough kavod, or honor, to one group, for giving too much to another. And we were warned turnout would be low — perhaps a few hundred or fewer — in the intense summer heat.

I understood that some would choose to stay away. But we were determined to take that first step — even if it was imperfect — and on July 11, under the banner of the American Jewish Committee, the Anti-Defamation League and dozens of other organizations, some 3,000 Jews and allies came together in front of the U.S. Capitol to demonstrate Jewish solidarity.

I never wanted to organize a rally. I just wanted to attend one.

When Hamas rockets started falling in Israel, and Jews found themselves being attacked on New York and Los Angeles city streets, I agitated for someone to scale the local rallies run by the Israeli-American Council, like one I attended in New York, into an in-person national rally in Washington. I made many calls. How many Jews would have to die or be threatened, in Israel or here at home, before our anger overflowed into the streets?

At first, nobody raised their hand. I vowed to help whoever did.

That group was the relatively unknown Alliance for Israel. Within a couple weeks, we had partnered with the ADL and AJC, and brought together the vast majority of the Jewish world from right to left, Orthodox to Reform, to stand with us as sponsors. Together we created a platform for powerful testimony that needed to be put on the record for the thousands who attended and the many more who watched at home.

Rabbi Jeffrey Myers described reciting the Viddui (the deathbed confession) while a murderer stalked his congregants at the Tree of Life synagogue in Pittsburgh. Just out of the hospital, Rabbi Shlomo Noginsky of Boston drove eight hours with his arm in a sling to tell us how his attacker sought to slash the many children behind him. Matthew Haverim shared how his parents fled Iran, and how he was beaten for declaring his Jewish identity to a group of anti-Israel protesters in an L.A. restaurant. Talia Raab from Illinois described how an anti-Israel mob screamed “kill the Jews” as they attacked her family’s car. These testimonies could not wait another day.

Rabbi David Saperstein, a light within the Reform movement who feels Israel needs to withdraw militarily from Judea and Samaria, spoke moments after Dan Raab quoted Menachem Begin and announced his upcoming enlistment in the Israeli army. Both received respect and applause from the audience. Ron Klein of the Jewish Democratic Council of America and Norm Coleman of the Republican Jewish Coalition — former members of the House of Representatives and Senate, respectively — jointly declared that antisemitism was a bipartisan problem and that both parties need to work together to stop it wherever it emerges. Their on-stage embrace is a refutation of everything partisan we have heard for the past eight years.

In a profound demonstration of allyship, Joshua Washington, the director of the Institute for Black Solidarity with Israel, sang “Gesher Tzar Meod” (“The World is a Narrow Bridge”) with Rabbi Menachem Creditor of UJA-Federation of New York and reminded us that we do not stand alone.

On Tisha b’Av, I reflected on all the anger sent my way. We had tried to build a broad coalition among those who agree on the Jewish people’s right to exist in peace and security here, in the Jewish State of Israel and around the world. The cynics insisted that this unifying belief was not enough given how much disagreement there is among American Jews on Israeli policy and how best to combat antisemitism.

But I believe the cynics are wrong. There is another way.

Imagine the possibility that your ideological opponent is not an enemy but is a champion of something rooted in Judaism.

Yesterday we mourned 2,000 years of exile, brought about by our hatred for one another.

Yesterday many of us mourned what is happening now.

Yesterday I felt the sense of loss for our divided community. I am done being angry at Jews with whom I disagree. I am saving my anger for the antisemites who threaten our safety in the Diaspora and in Israel, who lie about us in the halls of Congress and in American universities, who work within social, published and broadcast media to spread bias against us.

Today is the day after Tisha b’Av. It is time to rebuild. PJC

Elisha Wiesel is the son of Marion and Elie Wiesel. This piece first appeared on JTA.