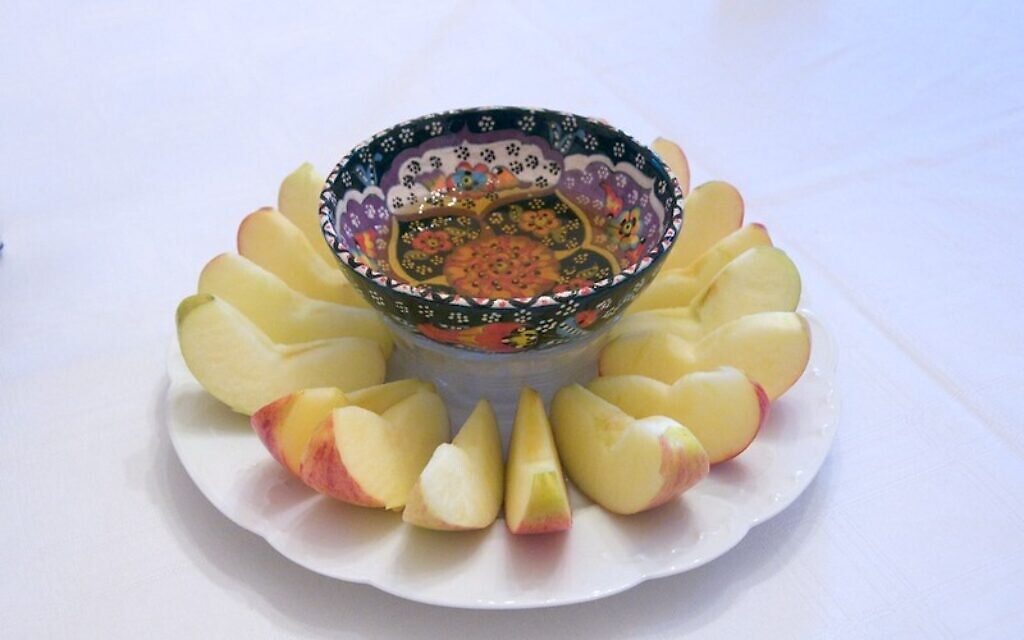 Jews around the world celebrate with Rosh Hashanah with apples and honey while off from work. Photo by Samuel, courtesy of Flickr.com.

“Hey Allies: Please don’t schedule meetings or events on the Jewish holidays!” So says a meme that has circulated widely in recent days including the dates for Rosh Hashanah, Yom Kippur, Sukkot and Simchat Torah.

Seems like a pretty harmless and potentially helpful message to post on social media in the run-up to the High Holidays, right?

I, too, have often had to seek special consideration from employers and colleagues for my religious observance. Indeed, being able to live my life by the rhythms of the Hebrew calendar without having to explain myself constantly or play catch-up on lost work days is one of many reasons I moved to Israel from the United Kingdom in my 20s. However, as a scholar of identity, a builder of pluralistic institutions and an adviser to organizations on issues of diversity, I believe posting such messages can do more harm than good.

First, it doesn’t need to be said. Few Jews in the U.S. observe the Jewish holidays in ways that clash with their work commitments. Fewer than half of America’s Jews fast on Yom Kippur. Many of those who do fast also abstain from work that day and at least the first day of Rosh Hashanah. But it’s a much smaller minority that won’t work on the first two and last two days of Sukkot. Suggesting otherwise betrays our own diversity.

Second, it doesn’t need to be said by those saying it. Actually, let me rephrase: Those saying it — shouldn’t. What gives traditionally observant Jews the right to speak in the name of America’s less observant majority? Were a company or organization to black out the 11 (!) dates listed in the meme, it might lead “allies” to wonder why so few of their Jewish colleagues are taking these days off. And that risks exposing any Jew who works as usual on any of the listed dates as somehow less Jewish, or less serious about their Jewishness, than those who observe the holidays.

In any case, those who do observe these holidays have many better ways to make the relevant accommodations in ways that don’t lump Jews together or pry them apart. They can arrange with bosses and colleagues to reschedule, make up lost hours or use vacation time. In the unlikely event of such requests being denied, they can appeal to official guardians of employee rights, from HR departments to U.S. courts, which are highly accommodating of religious needs.

I would also argue that having to raise these issues from time to time — and sometimes make difficult choices — is part of what it means to be an observant Jew, and in some ways is as core to our contemporary identity as the holidays themselves.

But the problem is not just who is doing the saying; it’s also whom they are addressing. In the parlance of our times, “allies” is a dog whistle to the woke, who all too often see Jews as part of the problem rather than the solution — as a white, privileged class rather than an ethnic minority in need of protection or support. Worse, by appealing to non-Jews for special consideration on grounds of diversity and inclusion while failing to respect internal Jewish diversity and implicitly excluding non-observant Jews, the meme reinforces the far left’s tendency to view Jews as a religious and political monolith — as they did this year regarding Zionism, Israel-Palestine and the war in Gaza.

Third, it doesn’t need to be said now. Uniquely among the biblical festivals, Rosh Hashanah does not commemorate a momentous event in the life of the Jewish people, such as the Exodus or the Revelation at Sinai. Rather it commemorates the world’s creation and God’s judgment of humanity in its entirety. In other words, whereas all other feasts and fasts in the Hebrew calendar are particularist, Rosh Hashanah is universalist. It is, therefore, a time to reflect on what we have in common, not what separates us; to focus on rights and duties we share with all of humanity rather than on securing special treatment for ourselves.

So how’s this instead: After making your own arrangements for the upcoming holidays, ask yourself whether there’s anything you can do to make it easier for other Jewish colleagues to observe them in the ways they prefer. Conversations will likely be more effective than social media posts. But if you do choose to post, consider something like this:

“Dear friends: Over the next few weeks, many Jews will be observing holidays in a variety of ways. Please be understanding and helpful when a Jewish colleague takes off on some or all of those days, and let us know how we can reciprocate when you observe special days of your own. As Rosh Hashanah teaches us, we’re all in this together.” PJC

Eli Gottlieb is a cultural psychologist, advisor to government and nonprofit organizations on vision and strategy, and a senior visiting scholar at The George Washington University. This piece first appeared on JTA.