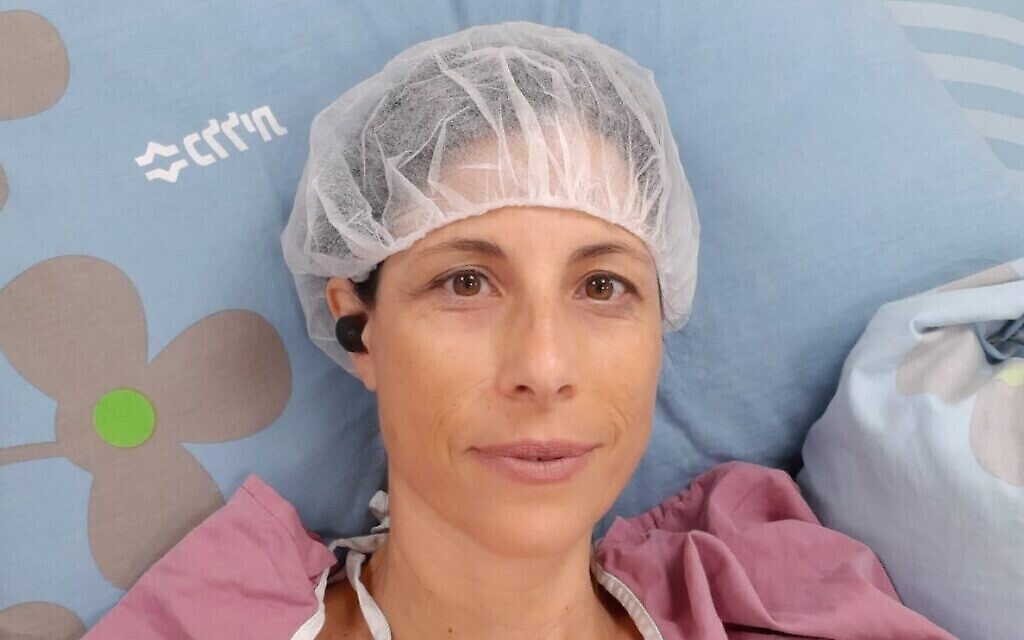 When Idit Harel Segal, a 50-year-old married mother of three, told her loved ones she was planning to donate one of her kidneys simply to do a good deed, they were aghast.

And that was before the staunchly right-wing family found out that the recipient would be a Palestinian from Gaza.

“I wanted to do something big — and what is bigger than saving a life,” Segal told Zman Yisrael, The Times of Israel’s Hebrew-language sister site. She said she was inspired by her grandfather, a Holocaust survivor who always taught her to live a meaningful life.

Said Segal, a resident of the northern village of Eshhar: “I read stories about people who donated kidneys and was disappointed to see they were almost only men. I told myself, I’m a strong woman, and I’m going to do it. Something inside me felt like it was the right thing to do.”

Her husband, Yuval, was baffled by the decision to risk her health, and possibly her life, for someone she didn’t know.

“Why didn’t you tell me?” she quoted him as saying. ” How are you doing this to yourself? You are young, this isn’t a joke, and what if one of your children needs a kidney?”

While Yuval didn’t question her right to make decisions regarding her body, he repeatedly begged her not to follow through, she said.

When she told other relatives, the reaction was even worse.

“I encountered wall-to-wall opposition,” she said. “The person who took it hardest was my father, who was really afraid, as if I was going to die. He had a relative who died of kidney failure, that could be what spooked him.”

Segal said her relations with her father devolved into repeated fights over the matter, and that at one point he even told Yuval he should divorce her over her choice. Father and daughter stopped talking, and the couple did not hold the Passover Seder with the family as usual.

The only family members to fully support her decision were her kids, aged, 23, 15 and 10. The eldest, Gal, published a supportive Facebook post that made waves online. Her middle son “doesn’t really show what he feels [but] he says it’s my choice and it should be respected.” For her youngest, a girl, “I’m a real superhero. ‘A fairy,’ she says.”

“I think that the reason most people who donate kidneys are men is because of the difference in attitude,” said Segal. “We’re still a patriarchal society, and men still treat women and their bodies in a protective way, as if they’re property.”

And then came the recipient

A fresh layer of potential difficulty arrived when Segal found out that the next person in line for a kidney, who would be receiving hers, was a three-year-old boy from the Gaza Strip.

Bilal (not his real name) suffered from a congenital kidney defect and had needed dialysis treatment his entire short life. His father is a taxi driver and his mother is a law graduate. He has a seven-year-old brother.

When it became clear the boy needed a kidney transplant — and nobody in his family could provide one due to compatibility and health issues — his father agreed to donate a kidney to an Israeli woman in return for his son being next on the priority list.

The development made it even harder for Segal’s ideologically right-wing family to accept the kidney donation. It also touched a personal nerve, as three family members were murdered by Palestinian terrorists: Segal’s paternal grandparents were killed in a Jerusalem terror attack in 1948, when her father was a year old. Her father grew up in an adoptive family, and during the Second Intifada in 2002, his adoptive uncle was killed in another terror attack in the capital.

Even though her views are firmly to the right, Segal did not waver from her decision when she learned who the recipient was.

“From my perspective, my donation was personal and not political,” she said. “And the news of who was receiving the kidney did not make me regret it or reconsider it even for a minute. I felt that this is what was meant to happen, and not a day goes by that I’m not happy about saving the life of that sweet child.”

Her husband’s reaction was that it was “a waste,” she recounted. “Tomorrow there will be an [IDF] operation in Gaza and he’ll be killed, and then what have you accomplished?” he said. Others also tried to dissuade her, and she didn’t tell her parents who the recipient was.

Then, one day before the operation, the phone rang. It was her father. “You are my daughter and I wish you luck,” he said.

“I started crying in relief, I cried so hard I didn’t hear the rest of the things he said,” Segal recounted. “And then I felt there was nothing to lose and told him the recipient is an Arab boy from Gaza. He sighed as if to say ‘What can I do.’ He had accepted this ‘disaster’ of me donating, so maybe it didn’t matter who received it.”

When she arrived at Beilinson Hospital in Petah Tikva for the operation earlier this month, Segal said the first thing she asked was to see Bilal.

“First I met the father. He smiled, treated me with fondness from the start. I said to him the few sentences I know in Arabic,” she said. “I brought the child a doll and children books by [David] Grossman translated into Arabic. At first it was sad for me to see him. I recognized his appearance from the picture in which he looked healthy, and suddenly he’s with all the dialysis treatments.”

She said she was grateful that Bilal’s mother allowed her to touch him. And she was moved by the ability of the two families — she and Yuval, Bilal’s parents — to bond in the hospital.

“There was one touching moment when the mother, Bilal and I were together in their room and I was caressing him and singing him lullabies in Hebrew… and stroking his head, and on the third song he fell asleep, and so did she. A moment of sweet gentleness. And then I thought to myself, wow, what’s going on here, I’m with a Palestinian woman and child from Gaza.”

“He’s really funny, that guy, such a child, even though he is 31 years old with two children. I offered him cake and told him to choose and he chose the most over-the-top and chocolate-packed roll. And during this, a sad thought passed through my mind: Why can’t the world be like this?”

Unfortunately, the difficult reality of the conflict was never far from their experience. During Operation Guardian of the Walls in May, in which Gazan terror groups rained down thousands of missiles on southern Israel and Israel responded with hundreds of airstrikes, the family’s home was destroyed — apparently in an Israeli airstrike.

“They were telling us that their home in Gaza was destroyed in the latest operation. They showed me a video with a destroyed home and I understand it was their home. And I asked them, ‘Where do you live?’ He says, ‘Sometimes with a friend, sometimes with in-laws.’”

Following the surgery, Segal gave them all the cash she had in her pocket, NIS 450 ($140). Afterward, a left-wing activist she met in the hospital helped raise money for the family, and has so far managed to raise NIS 3,000 ($920) along with clothes, supplies and other needed items.

Segal said the families remain in touch through video calls.

Strengthened in her political stance

She added that despite her experiences, her political positions have not changed.

“I’m still right-wing,” she said. “This is all a human matter, not a political one. Sometimes I think that it would have been better if all the Palestinians would have left during the War of Independence [surrounding Israel’s establishment in 1948], every last one,” she told Zman Yisrael. “But I know it’s not realistic.”

Her experiences with the family from Gaza “in some ways strengthened my position. After all, in their view — not the ordinary Palestinians, but their politicians — we are all murderers.

“And if you look at what is being said and written about us abroad — the supposed atrocities Israel is committing against them — it is so far from the truth,” she added. “Where in world media will you find a single word about the help they receive from us, the efforts medical teams in Israel are making for a Palestinian patient?”

Bilal is recovering well, according to the hospital, and Segal says her father and other relatives have made up with her.

“They still regret what I did, but are happy I am healthy,” she said. “What matters to me is that I’m 100 percent content and happy with what I’ve done.” PJC