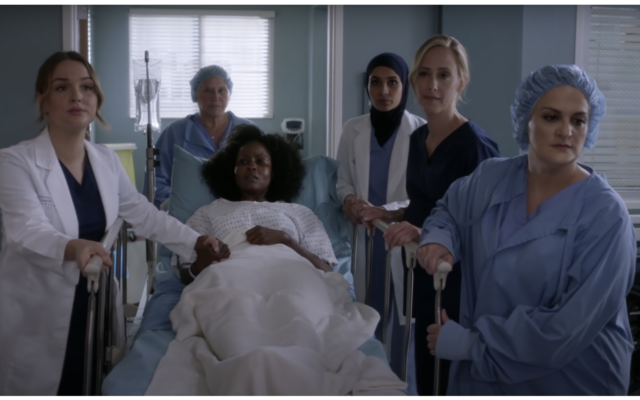 TV writer Elisabeth Finch (right) as a nurse on a 2019 episode of "Grey's Anatomy," which she wrote allegedly inspired by her experiences as a sexual assault survivor. Recently unearthed details have cast doubt on many of Finch's stories about her own trauma, including her claim that she had helped clean up a friend's remains from the Tree of Life shooting. (Screenshot via ABC)

Over nearly a decade of writing and producing for the long-running ABC medical drama “Grey’s Anatomy,” the Jewish native of Cherry Hill, New Jersey, told a lot of outlandish stories about her past. Together, the stories portrayed her as a wounded soul who could survive anything, and would form the basis of multiple “Grey’s” episodes. They also helped land her the coveted writing gig in the first place, with her tales of woe reportedly moving series creator Shonda Rhimes.

Following an investigation from parent company Disney and a two-part feature this week in Vanity Fair, Finch’s stories now appear to have been almost entirely made up. And some of her most egregious alleged lies involved her own Judaism.

According to Vanity Fair, Finch had entered an Arizona mental health treatment center shortly after the 2018 mass shooting at the Tree of Life synagogue in Pittsburgh. There, under the assumed name of a “Grey’s Anatomy” character, she began telling her process group that she was suffering from post-traumatic stress disorder because a friend of hers had been one of the Tree of Life victims.

What’s more, Finch claimed, she had gone to Pittsburgh to help authorities “clean up the body from the synagogue floor” — in accordance with what she said was Jewish tradition.

Finch would continue to repeat her story about her Tree of Life connection for years, and would claim that any mention of guns, loud noises or even a dream catcher with a Tree of Life-inspired design triggered her PTSD. In a tweet following the New Zealand mosque shooting in 2019, she identified herself as “someone who stood amidst the Pittsburgh Synagogue carnage.”

But her own social media showed her out with friends the night of the shooting and the night after, and the Pittsburgh Jewish burial societies that coordinated the cleanup arrangements told Vanity Fair that no one with Finch’s name was present for them.

The Tree of Life shooting wasn’t the only time Finch claimed to have been directly affected by antisemitism. Following President Donald Trump’s election in 2016, she posted a photo of an antisemitic message that had been left outside her Santa Monica door, with the message, “Yes, I am the only Jewish person in my building.” Although the origins of the message were not revealed in the article, the story said Finch had a history of concocting violent threats against herself and, her then-wife said, once staged a break-in at her apartment.

When Finch’s then-wife Jennifer Beyer, who’d met her during those initial therapy sessions, confronted Finch about her lies, she tried to push the writer to make a full apology to those whom she had wronged. Beyer believed the most appropriate time to do so would be Yom Kippur, the Jewish holiday of repentance.

But the holiday came and went, and Finch resisted making a full apology. Today the couple is in the midst of a contentious divorce; Beyer discovered that Finch had been telling stories of trauma that Beyer says had been lifted from her own life.

Finch, whom Vanity Fair reports had a bat mitzvah and attended a Jewish summer camp, had written for “The Vampire Diaries” prior to landing on the “Grey’s” writing staff in 2014. As a “Grey’s” writer, she was outspoken about her own supposed trauma and penned pieces for Elle and The Hollywood Reporter about her personal life.

Finch took a leave of absence last month amid corporate investigations into her statements. Her exit from the show came shortly after Rhimes premiered a different show: “Inventing Anna,” about a gifted scammer. PJC