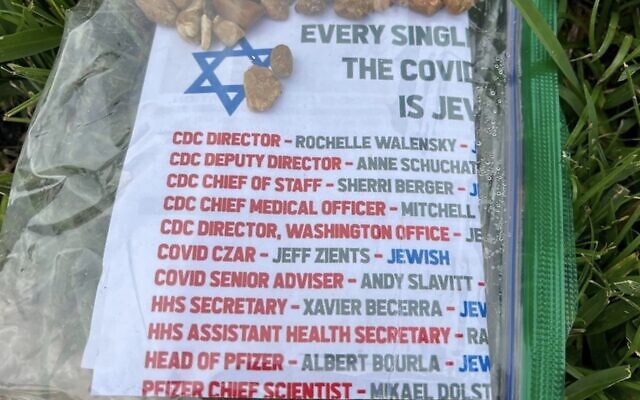 Miami Beach Mayor Dan Gelber found some of the antisemitic flyers while out on a walk with his wife. (Dan Gelber via Twitter)

SARASOTA, Fla. (JTA) — Flyers blaming Jews for COVID-19 were found in multiple cities in Florida and in San Francisco this weekend, less than two months after similar ones were found in at least eight states nationwide.

The Mayor of Miami Beach, Dan Gelber, who is Jewish, saw some of the flyers Sunday morning while taking a walk with his wife and posted a photo of one on Twitter. The flyers were delivered inside plastic sandwich bags with small pebbles and listed names of Jewish public health officials, such as Rochelle Wolensky, the head of the Centers for Disease Control, and Jeff Zients, the Biden administration’s COVID-19 czar.

The flyers also contained an advertisement for Goyim TV, a video website run by the Goyim Defense League.

The Miami Beach Police Department confirmed to the Jewish Telegraphic Agency that they have collected 205 antisemitic flyers left at homes in Miami Beach and Surfside over the weekend. The rental vehicle believed to have been involved has also been located.

This morning hundreds of homes in our community found plastic bags outside their homes filled with a hateful anti-Semitic flyer and small pebbles. @MiamiBeachPD is actively investigating to determine their origin. As a precaution we’ve increased patrols in our neighborhoods and… pic.twitter.com/5bx0RvnRoD

Miami Beach and Surfside have large Jewish populations and the distribution of the flyers this weekend, especially in the wake of the terrorist attack in Colleyville, has created concern in the community.

“We felt very violated as a city,” Gelber told JTA. “We’ve increased patrols in our neighborhoods and at religious institutions.”

In a statement on their website, the Greater Miami Jewish Federation claimed that the flyers were allegedly handed out by the Goyim Defense League, an antisemitic white supremacist group, though this has not been confirmed by police.

“We are going to find these guys,” said Gelber. “The only thing that rivals their hate is their stupidity.”

Originally thought to only have been found in Miami, more were found on the streets on the other side of the country in San Francisco’s Pacific Heights neighborhood.

The Jewish News of Northern California reported on Monday that Pacific Heights residents Jon Staenberg and his 13-year-old daughter, Rivka, found some near their home on Sunday.