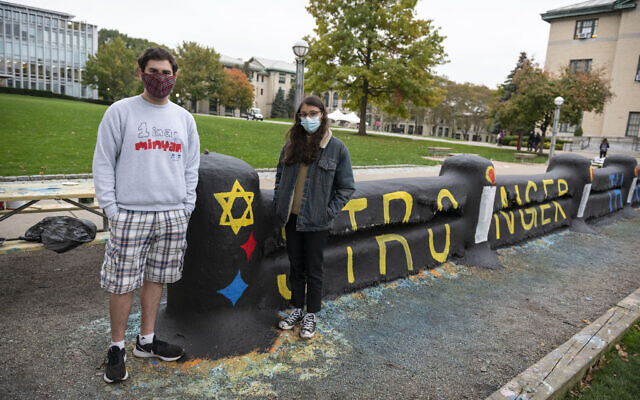 Zachary Leventhal and Yael Canaan after the student-organized service at the Fence on Oct. 27, 2021 (Photo by Kevin Lorenzi)

This article was updated on Nov. 5 to include additional comments from Rabbi Shlomo Silverman.

Zachary Leventhal was not in Pittsburgh on Oct. 27, 2018, but he has vivid memories of the day.

Leventhal, now a junior at Carnegie Mellon University majoring in economics and math, was at an AIPAC summit for high school students in Washington, D.C., when he heard the news of the attack at the Tree of Life building.

He remembers the tug of two divergent feelings that day: the strength of the Jewish community as he stood with 400 student leaders to discuss advocacy for Israel, juxtaposed with a sense of Jewish vulnerability as 11 people were murdered in an act of antisemitism just four hours away.

Now determined to help educate others about the consequences of hate, Leventhal, president of CMU’s Jewish fraternity, AEPi, together with other Jewish student leaders and members of the CMU community, organized a commemoration of the attack in a very CMU way: painting the Fence.

The Fence is the university’s “unofficial billboard” upon which student groups paint messages for the campus community. Fence painting occurs between midnight and sunrise, and students stand guard if they want their message to remain.

More than 150 people — Jewish and non-Jewish — showed up at the Fence at midnight on Oct. 26, in a show of solidarity. There, students painted the words “Stronger Than Hate” along with the names of the three congregations attacked — Dor Hadash, New Light and Tree of Life— and 11 candles in memory of those who were killed.

“We wanted to do something big and make sure it was something the whole campus could be a part of,” Leventhal said.

Yael Canaan, a senior at CMU majoring in architecture and human-computer interaction, helped organize the Fence painting event, as well as another commemoration event at the Fence late in the afternoon on Oct. 27.

Canaan, who is from New Haven, Connecticut, was a freshman at CMU when the 2018 attack occurred. She addressed the crowd gathered at the Fence-painting about “why it is important to remember,” she told the Chronicle.

“One of the reasons this was so important is because I’ve noticed so many people on campus don’t know anything about Tree of Life,” Canaan said.

After she spoke, 11 Jewish students who had been on campus the day of the attack lit yahrzeit candles. Then, Leventhal led everyone in reciting the Mourner’s Kaddish. Several senior CMU administrators also stopped by, including CMU president Farnam Jahanian. Many students stayed together at the Fence until 5 a.m. 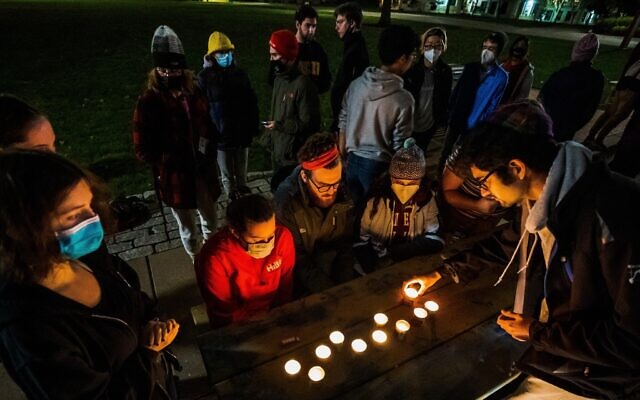 CMU students light yahrzeit candles in memory of the 11 Jews killed in the Tree of Life building (Photo by William Lyon/CMU)
“It was heartwarming,” said Canaan, who is president of Achayot Shel Carnegie Mellon, an organization committed to Jewish sisterhood launched at CMU in 2020.

At the afternoon event later that day, Rabbi Shlomo Silverman of Chabad of CMU led the students in prayer and the lighting of additional yahrzeit candles. Dozens of students attended that event as well, along with university administrators.

“It was nice to see people showing support,” Silverman told the Chronicle. 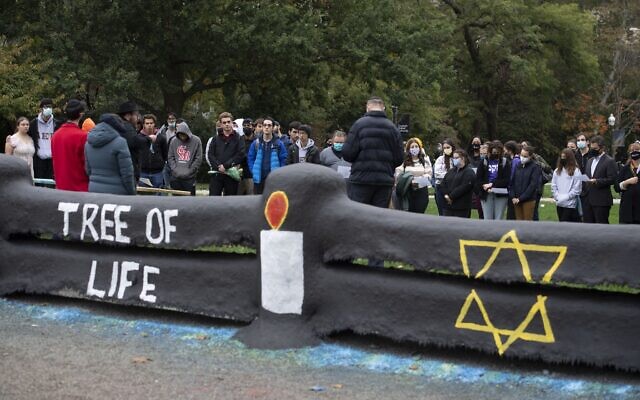 Dozens of students and CMU officials gathered at the Fence on Oct. 27, 2021, for a service commemorating the attack at the Tree of Life building. (Photo by Kevin Lorenzi/CMU)

Hillel Jewish University Center also lent its support to the CMU events. Alex Zissman, Hillel’s director of student life at CMU, and Dan Marcus, executive director and CEO of Hillel JUC, both attended the Oct. 27 afternoon event, with Marcus addressing the students. Hillel also supplied kosher pizza for the students painting the Fence, and contributed toward the cost of the paint.

“We appreciate the leadership of our students in bringing together the CMU community to hold each other in comfort and support,” Marcus told the Chronicle. “And it was meaningful for president Jahanian and other senior administrators of CMU to be present, to provide their care and support and stand in solidarity with the Jewish student community at CMU.” 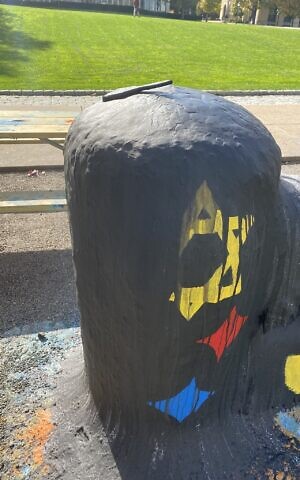 After discovering the black paint defacing their message on the Fence, Jewish students reached out to campus police and notified university officials.

CMU determined that it was not an antisemitic incident.

“Campus police are 100% certain it was an accident,” said Shawn Brokos, director of community security for the Jewish Federation of Greater Pittsburgh.

Detectives investigated the incident, including a review of a video recording of what occurred, and determined that a maintenance worker assigned to clean up the area had placed a can of black paint on top of the pillar and it accidentally spilled, Brokos told the Chronicle.

“Carnegie Mellon University takes these matters seriously,” Shilpa Bakre, CMU’s interim managing director of communications, wrote in an email to the Chronicle. “CMU cares deeply about the safety and well-being of our students and works diligently to foster an environment of respect and inclusivity. The preliminary investigation of the incident that transpired at the fence earlier this week indicated that the actions were not negatively motivated but inadvertently occurred when a university employee was cleaning up leftover paint.

“The university is grateful to the students who painted the Fence to honor the Tree of Life victims and we will continue to provide support to members of our Jewish community at this time of remembrance.”

Hillel’s Marcus said he appreciated “the alacrity with which CMU investigated and concluded this, and we understand this was an unfortunate accident.”

But regardless of whether the incident was accidental, Silverman said the paint spillage looked “really bad,” adding that “the students have a fear of antisemitism.”

“It’s about the students’ fears,” the rabbi continued. “If something can be perceived as antisemitic, even if it was an accident, you have to address the fears of the students.”

Last May, during the conflict between Israel and Gaza, a CMU student group painted the words “Israel is an Apartheid State. Save Sheik Jarrah” on the Fence, causing many Jewish students to fear antisemitic motives. Since that incident, “there is a good degree of vigilance and wariness” among Jewish students on campus, Leventhal said.

In regard to the black paint spilled on the Fence this week, Leventhal said he is “willing to believe it was an accident.” But he does think that university officials could have been more “proactive” in getting that information out to students earlier to quell any concerns of antisemitism.

“It was unfortunate and scary for students to see that in the morning without an apology from the university,” Leventhal said. “We were the ones who had to see it, to discuss it, to email campus police about it. It would’ve been nice if we had some sort of communication and assurance from the university before we saw it.”

In general, Leventhal stressed, Jewish students “do have support from the university,” noting with appreciation the presence of senior CMU officials at the Oct. 26 and Oct. 27 commemoration events.

Prior to hearing from the university that the paint spillage was accidental, Jewish students debated how to respond. Hesitant to post about it on social media for fear of igniting antisemitism, Leventhal said, they came up with another solution.

“We painted over it that night,” Leventhal said. PJC