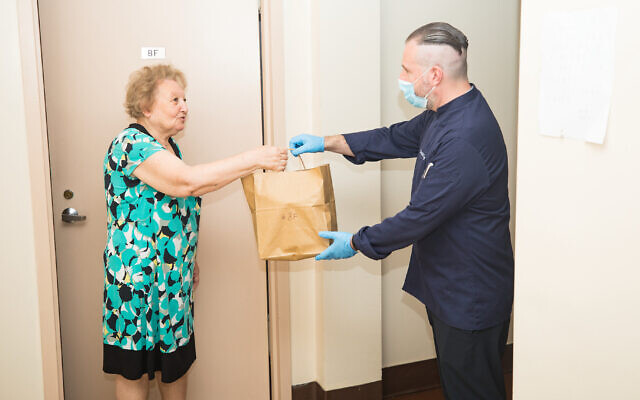 David Teyf, CEO and executive chef of Madison and Park, delivers Shabbos meals to homebound Holocaust survivors on the Lower East Side in New York City on Friday, Aug. 21, 2020. (Photo by Benjamin Kanter via JTA)

(JTA) — Growing up, Passover was always a special time of year for David Teyf.

It wasn’t just about the holiday. It was also the stories his family would tell about the matzah factory they used to operate behind his grandfather’s house in Minsk before they left Soviet Belarus in 1979. Teyf, who was born in that house, was 5 when they left that capital city.

Now a successful chef, Teyf has few memories of the matzah factory. Yet he has found himself thinking about it more often lately as he cooks and delivers weekly Shabbat meals, and more recently Passover meals, for Holocaust survivors living in New York City. He started cooking the meals nearly a year ago, in part inspired by his own grandparents, all four of whom were Holocaust survivors.

“If my grandparents were alive, who would take care of them?” Teyf thought to himself. “A Holocaust survivor who’s 90 years old, who’s taking care of them? That’s when I said to myself, I have to do something.”

Teyf is one of many in the restaurant and events industries who found themselves unable to work when the pandemic began last spring. Manhattan’s Museum of Jewish Heritage-A Living Memorial to the Holocaust, where he runs LOX at Cafe Bergson, closed to visitors last March. So did the 2nd Ave Deli, where Teyf is the executive chef of the second-floor dining room. Soon the weddings, bar and bat mitzvahs and other events he was set to cater for the rest of the year were canceled, too.

“I was busy 24/6,” Teyf said of his pre-pandemic schedule. “Then when the pandemic started I went from being busy 24/6 to nothing, absolutely nothing.”

It was during one of the long walks through Central Park that filled his newly empty days that he started thinking about how his survivor grandparents might have gotten through the pandemic.

Teyf contacted the president and CEO of the Museum of Jewish Heritage, Jack Kliger, and they reopened the cafe’s kitchen with a few workers shortly after Passover 2020. With some financial support and names supplied by local organizations that provide services to Holocaust survivors, Teyf and his team started cooking and delivering Shabbat meals to the survivors at their homes all over New York City. Teyf focused on traditional foods like challah rolls, gefilte fish and kugel but tried to make the foods a little healthier, using less salt on account of the survivors’ ages.

He had grown up up hearing about how his grandparents had starved during the war. That inspired a slogan for his current project: “No survivor should ever go hungry again.”

Teyf and his team do all the deliveries themselves, driving to survivors’ homes throughout the five boroughs. Typically they ring the doorbell and leave the meal at the door in order to limit any COVID risk to the survivor. But sometimes a survivor opens the door while the deliverer is still standing there.

“They’re very grateful and their smiles mean the world to me,” Teyf said. “And they speak Russian, so they give me their blessing.”

Even as more and more people are vaccinated and the risks involved with the pandemic decrease for the vaccinated elderly people spending time outside their homes, Teyf isn’t planning to end his project anytime soon. In fact he’s looking for more names, hoping to add to his list of about 70 survivors across the five boroughs, where an estimated 20,000 survivors live.

The Shabbat meals and deliveries remind Teyf of his grandfather and the risks he took to prepare matzah for the Jews of Minsk — a reward that makes the time and cost involved in his Shabbat meals project well worth it.

“When I do these meals and when we cook and deliver,” he said, “I always see my grandfather smiling down. I feel him.” PJC