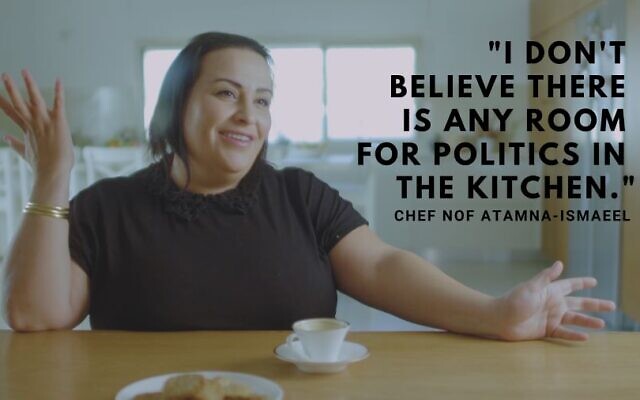 The festival, launched in 2015 by microbiologist Nof Atamna-Ismaeel, the first Muslim to win the Israeli cooking competition MasterChef, pairs Jewish and Arab chefs. Atamna-Ismaeel said the festival aimed to move beyond the conflicts of the region because there is no room for politics in the kitchen.

Hawk opens the film with Atamna-Ismaeel describing her identity.

“I am a Muslim. I am an Arab. I am an Israeli. I am a Palestinian. I am a woman. I am a scientist. I am the first Arab to win Israel MasterChef. It caused a lot of happiness in society,” she says.

Filmed during the 2017 and 2018 festivals, Hawk spotlights several chefs, highlighting their backgrounds and differences, while showing the synergy food can create.

Haifa chef Shlomi, who operates the restaurant started by his grandfather after the family patriarch came to Israel at the end of World War II, is paired with Arab-Israeli chef Ali.

Ali’s family immigrated to Israel from Syria and lives in Ghajar Village, on the border between Lebanon and Israel.

The Arab chef is quick to note that, despite his Syrian roots, he views himself as Israeli.

“I am part of the nation,” he says, after pointing out that the Israeli military protects his village.

Ali’s food honors his Syrian roots; Shlomi’s that of his Eastern European grandfather.

Despite the differences in backgrounds, food, it appears, is a common denominator.

“I’m going to work with Ali Khattib on the dish for the festival,” Shlomi says. “It’s not my style of cooking at all, but that’s what’s nice — it’s my mother’s style because her roots are Egyptian.”

The film succeeds as an exploration of identity. Each of the chefs discusses how they see themself and what they bring to their dishes from their background and heritage.

Each chef also acknowledges that despite their various backgrounds — Jewish, Syrian, half Christian/half Jewish, Arab, Moroccan — they are all Israeli.

“In our neighborhood,” Jaffa-based chef Salah says, “we spoke Arabic. We laughed in Hebrew. We cursed in Romanian. We got upset in Moroccan. And it was all ‘sababa’ (OK).”

Removed from the constraints of the conflicts that might have weighed heavier if the festival were held in another city, Haifa is presented as touched by its past and influenced by its ethnicities but, most importantly, as a foodie’s paradise — eclectic and cosmopolitan.

Despite making occasional references to the conflicts that have scarred the country and region, the documentary mostly achieves Atamna-Ismaeel’s goal of a politics-free festival.

Instead of discussing the tensions that exist in the country, the film highlights the inclusive nature of Israel — Osama, a chef from Akko talks of the synagogue, two churches and two mosques in his neighborhood. Former Haifa mayor Yona Yahav points to the peace in the city between Jews and Arabs which celebrates Ramadan, Christmas and Chanukah.

The film doesn’t take a deep dive into the various conflicts that exist between cultures, instead celebrating the food and eateries of those cultures.

Ingredients are presented in raw and prepared states, and the chefs profiled are shown cooking in their restaurants. Chickpeas and fish markets share the screen with outdoor cafes and high-end restaurants.

While “Breaking Bread” advances Atamna-Ismaeel’s mission, it doesn’t take a deep dive into the festival, nor does it present a completely inclusive point of view, as most of those featured in the film are male chefs.

Hawk’s documentary opens with a quote from Anthony Bourdain: “Food might not be the answer to world peace … but it’s a start.”
The same might be said for documentaries about food.

“Breaking Bread,” which was previously screened as part of the 2021 JFilm Festival opens March 11 at the Manor Theatre in Squirrel Hill. PJC