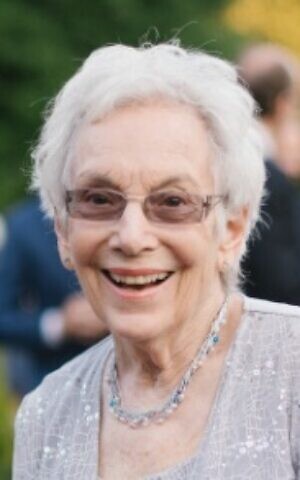 MARGOLIS: Barbara Ruth Tex Margolis, 90, of Silver Spring, Maryland, passed away on June 17, 2021. Barbara, daughter of Joseph and Esther Tex, was born in Pittsburgh, graduated from Taylor Allderdice High School and received a BA from the University of Pittsburgh. Barbara lived for 60 years in Uniontown, Pennsylvania, where, in addition to raising her family, she worked for the Women’s Resource Center, the Uniontown School District and Fallingwater. For the past eight years, Barbara resided at Riderwood Village, a senior community in Silver Spring, Maryland. Her favorite activities included spending fun time with her grandchildren and spoiling them with her famous ice cream pie and nut rolls. She was an avid reader and had an underappreciated sense of humor. She loved her dogs over the years, especially her beloved Lucy. Barbara had a special talent for growing plants and was known for her African violets and homegrown pickled tomatoes. A stylish lady, Barbara often wore outfits accessorized with a unique piece of African jewelry. She had a zest for life and adventure and traveled extensively including eight trips to Africa, two trips to Israel and several trips to Europe. She had a love for the theater, not only as an attendee but also as a performer in summer stock productions including “The Sound of Music” and “Fiddler on the Roof.” Volunteer work was important to Barbara, and she served in various organizations including the Pittsburgh Public Theater, the Uniontown Hospital, and more recently, the Riderwood Welcoming and Scholarship Committees.
Predeceased by her beloved husband Herbert of 67 years and sister Myrna Gust, Barbara is survived by her children James, Gary, Sara (Michel Pacqué) and Tom (Robin). She is also survived by grandchildren Derek (Lisa) Pacqué, Kyle and Malaika Pacqué, Rebecca (A. J.) Rossi, Joshua and Jennifer Margolis, and many devoted nieces and nephews. Donations in her memory can be made to the Riderwood Employees Scholarship Fund (elm.convio.net/RiderwoodSCH) or the charity of your choice. A private memorial service was held on June 20, 2021. PJC