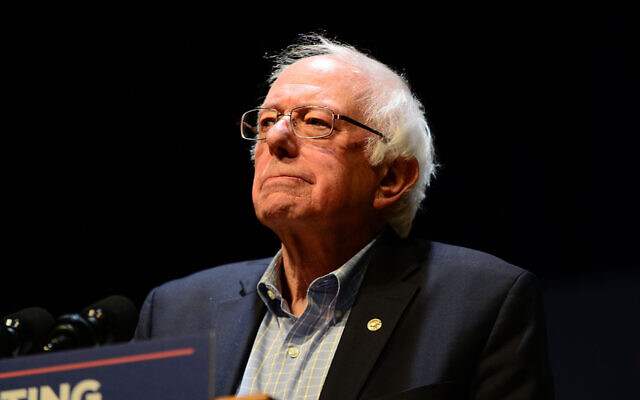 Bernie Sanders speaks at a MoveOn.org rally in Reading, Penn., Dec. 3, 2017. He is credited with opening the door for other progressives to publicly criticize Israel. (Lisa Lake/Getty Images for MoveOn.org via JTA)

(JTA) — In a speech about the dangers of bigotry at a memorial for the synagogue shooting in Pittsburgh, Bernie Sanders included Israel in a list of countries where authoritarianism is rising.

Sanders, the democratic socialist Vermont senator, was the keynote speaker at a virtual memorial event hosted by Bend The Arc, a progressive Jewish advocacy group. The event, held a day after the two-year anniversary of the synagogue shooting in Pittsburgh in which 11 Jews were killed, centered on warning of the dangerous effects of white supremacy and xenophobia.

Sanders spoke about how relatives of his were murdered in the Holocaust, and how he understands the threat posed when white supremacists gain power. He then spoke about how white supremacy targets Jews and all minorities, and how it poses a threat to liberal democracy. He then segued to speaking about how illiberalism and authoritarianism were on the rise around the world, including in Israel.

“They don’t just hate Jews,” he said of white supremacists. “They hate the idea of multiracial democracy. They hate the idea of political equality. They hate immigrants, people of color, LGBTQ people, women and anyone else who stands in the way of their bigotry and racist ideology. All over the world — in Russia, in India, in Brazil, in Hungary, in Israel and elsewhere, we see this rise of a divisive and destructive form of politics. We see intolerant authoritarian political leaders attacking the very foundations of democratic societies.”

Sanders was frequently critical of Netanyahu while he was running for president earlier this year. Critics in Israel and abroad have also called out Netanyahu’s perceived disregard for democratic norms, including his remaining in office while on trial for corruption and legislation that critics say degrades the status of Israel’s Arab minority. An ongoing protest movement in Israel is also calling for Netanyahu’s resignation due to his handling of the coronavirus pandemic, which has spiked in Israel, and his corruption trial. In successive election campaigns last year, Netanyahu trumpeted his relationships with authoritarian leaders like Russia’s Vladmir Putin and China’s Xi Jinping as a selling point.

Netanyahu and his defenders claim that the corruption charges are spurious and that his relationships with world leaders bolster Israel’s international standings. He has likewise defended his response to the pandemic as a series of difficult but necessary choices.

Later on the Bend the Arc call, Sanders said he was “a proud member of the tradition of Jewish social justice” and called on listeners to “dedicate ourselves to build a country that embodies the values of equality, democracy and dignity for all people.” PJC