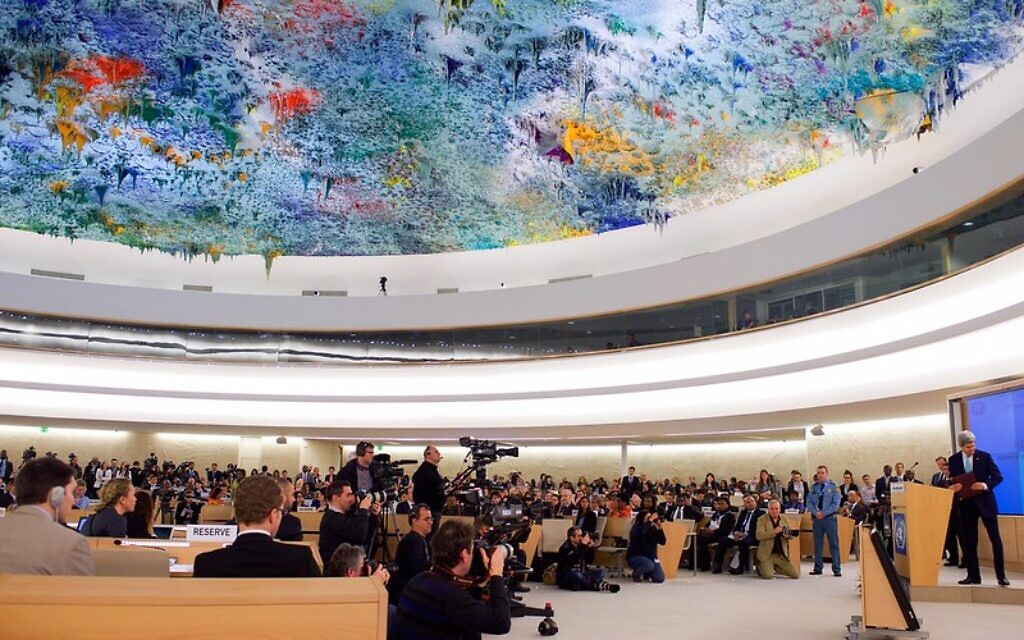 The United States was again elected this month to the United Nations Human Rights Council after an absence of more than three years. The U.S. fully deserves to be recognized as a global leader in promoting human rights.

Often, however, election to the world’s preeminent human rights body is not founded upon countries’ merit but political horse trading. In fact, none of the 18 vacant seats to be filled at the start of 2022 was contested; each will essentially have been claimed in advance by a “candidate” government without assurance of governments’ actual performance in protecting human rights or of equal opportunities for a stint on the council.

Case in point: Since the establishment of the council, around 120 of the 193 U.N. member states have enjoyed membership on it, some repeatedly.

Among the countries perennially left out is one subjected to far more harsh treatment by the body than any other: Israel.

This comes as no surprise to those within the U.N. system. After all, Israel is one of the United Nations’ most longstanding members, dating back to 1949, and it has also gotten more than its fair share of attention from the Security Council. Yet it has not been one of the 130 countries to have had at least one term in that powerful forum either. That’s unlike Algeria, Libya, Syria, Iran, Iraq, Lebanon and Yemen.

To sum it up: Over the course of nearly 75 years, one side of the Arab-Israeli conflict has repeatedly had a voice, and vote, on relevant matters in key international institutions. The other hasn’t.

One side has wielded an automatic majority in these critical settings — there are some 60 Arab and Muslim U.N. member states — and the other is the world’s only Jewish state, Israel.

But the inequity is not limited to questions of mere representation.

When the United States withdrew from the Human Rights Council in 2018, The New York Times characterized the pullout as protesting “frequent criticism of Israel’s treatment of Palestinians.” No country is immune to fair criticism, but this portrayal, sadly commonplace, represents nothing short of journalistic malpractice. What the council dishes out to Israel is not “criticism” but simple demonization, delegitimization and double standards.

Too many outsiders assume that the U.N.’s sky-high output of anti-Israel excoriations reflects the real-world misbehavior of a uniquely and wildly aggressive Israel.

In actuality, Israel serves as a convenient target for scapegoating and unjust isolation at the world body, despite an astonishingly humane record in the face of practically unequaled and unending existential threats.

Iran, Hamas, Hezbollah and Islamic Jihad — all openly committed not to limited territorial or political claims but to the outright destruction of the Jewish state — have never been condemned by the Human Rights Council for their fanaticism and terror.

As America rejoins the UNHRC, it must make clear that the body’s own legitimacy rests upon abandoning bias and bigotry in the pursuit of human dignity. Only concrete and substantial change at the council will make the body worthy of American membership and sustained investment. That change should start with ending the council’s singular fixation upon defaming Israel at the expense of highlighting the world’s most egregious and systemic human-rights abusers. PJC