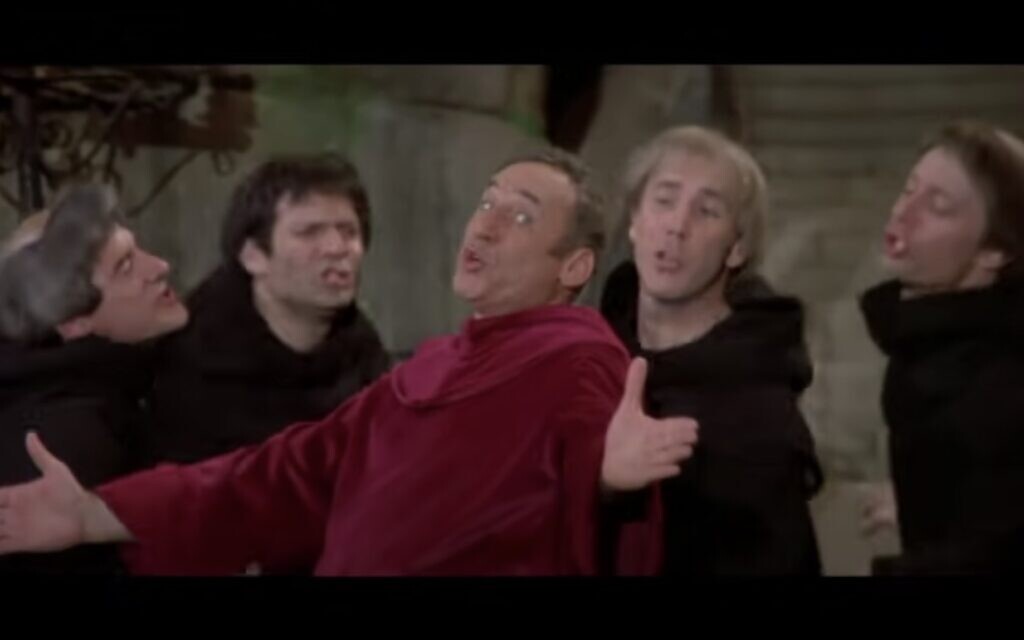 Mel Brooks as Torquemada in "History of the World: Part I" (1981), which will finally see a sequel on Hulu. (20th Century Fox/screenshot)

(JTA) — You couldn’t Torquemada it: Mel Brooks is making a sequel to “History of the World: Part I,” the 1981 revue that delighted and/or appalled Jews with, among other segments, a cheery musical take on the Spanish Inquisition.

The original was a feature film; the sequel on Hulu will be a variety series, Variety reported on Monday. Brooks, who is 95, will executive-produce and write; joining him will be professional funny people Nick Kroll, Wanda Sykes, Ike Barinholtz, David Stassen and Kevin Salter. Production is set to begin in 2022.

Most of the original film’s cast, including Madeline Kahn, Dom DeLuise, Gregory Hines, Cloris Leachman and Sid Caesar, have died in the 40 years since it was released.

“I can’t wait to once more tell the real truth about all the phony baloney stories the world has been conned into believing are History!” Brooks told Variety.

Brooks played a number of roles in the original “History,” including the Spanish inquisitor Torquemada in the Inquisition skit — a tough competition for the most joyfully tasteless segment. “We have a mission to convert the Jews,” Brooks sings as Torquemada, after sliding down a bannister, Broadway-style, to greet his prisoners in the torture chamber.

Other sketches covered cavemen, Moses, the Last Supper, the Roman era and the French Revolution, in which Brooks, as King Louis XVI, uttered the immortal catchphrase, “It’s good to be the king.”

The new series finally fulfills the teaser at the end of “Part I,” which promised a sequel that would cover “Hitler on Ice” and “Jews in Space.”