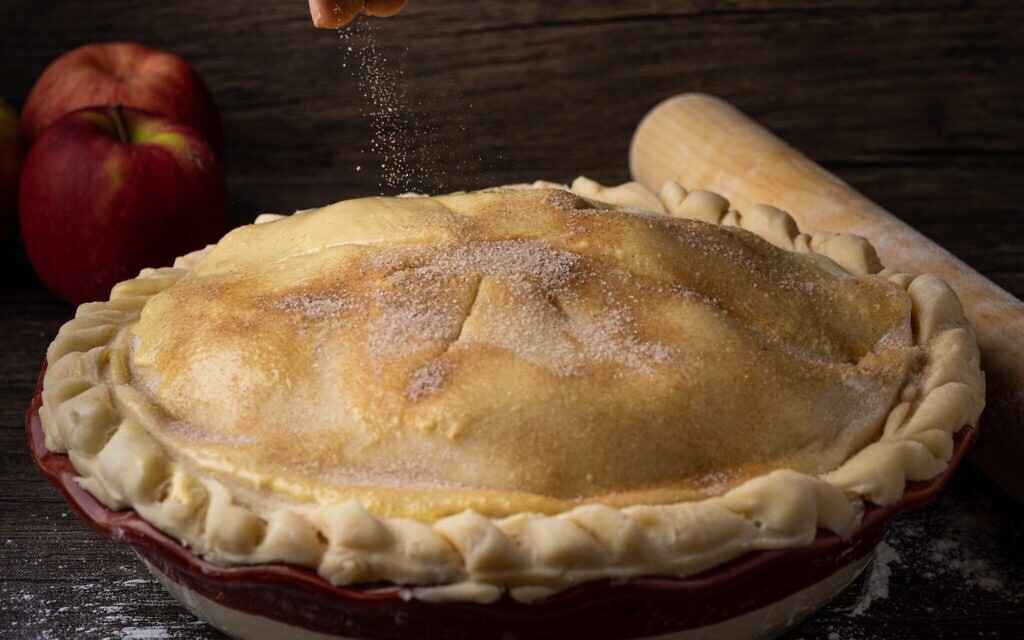 At the dawn of the 20th century, observant Jewish women made pie crusts and other pastries using rendered chicken fat as shortening!

They actually fried chicken skins until yellow fat oozed into the pan — which sounds so savory and Old World. But this shortening complied with the Kashrut Laws, which forbid mixing dairy products and meat at the same meal. Because butter wasn’t an option for kosher housewives serving meat, what else could they do but turn to schmaltz, glistening chicken fat?

In 1911, Crisco burst on the scene as an all-vegetable shortening. Procter & Gamble, its manufacturer, proudly promoted Crisco as a kosher food, one that performed as well as satiny butter but could be used freely with meat. As extraordinary as a one-day supply of oil that lasted eight days, the company boldly announced, “Crisco was the miracle for which the Jews have waited four thousand years.”

To this day, a slice of pie and its tempting crust are pictured on Crisco containers, indicating to consumers that the finest crusts start with Crisco shortening. Crust aficionados agree that Crisco produces the lightest, flakiest pie crusts, even more so than butter whose crusts are a bit brittle.

Since its introduction, Crisco has been a liberator, an equalizer that offered kosher women the opportunity to make pareve pies that compete with the puffiest, most delicate crusts in America.

To use with all the pie filling recipes below:

Coat the pie pan with nonstick spray. Sift the flour, salt and sugar into a large bowl. Reserve.

With a soup spoon, scoop the Crisco into about 5 chunks. Place the chunks in the bowl of a stand mixer or a second large mixing bowl. Using the paddle attachment or electric mixer’s firm beaters, beat the flour mixture into the Crisco, about ½ cup at a time, starting at a low speed and going to medium-high as the two are incorporated. Beat for about 30 seconds, or until the mixture resembles coarse sand.

Add the ice water, a tablespoon at a time, beating in between each addition. When the mixture turns into chunks of dough, it is ready. You may not need all of the ice water.

Form the dough into two balls. Roll them in your palms to get rid of as many seams or cracks as possible. Then, using your palms, flatten the balls into disks about 3-4 inches in diameter. Refrigerate them for at least 30 minutes before rolling.

To roll dough: Place parchment paper on the counter. Remove one dough disk from the refrigerator, and place it in the center of the parchment paper. Sprinkle a little flour on the rolling pin.

Do not roll back and forth, as the dough will tear. If it tears, you can fix it by pressing dough together with your fingers around the tear.

Roll the dough into an amoeba-shaped circle about ⅛-inch thick, slightly larger than the pie pan. Place a piece of aluminum foil over half of the dough circle. Fold it in half, parchment paper and all. Turn it upside down, and place the semicircle of dough along the pie pan’s midline. Gently pull away the parchment and foil and nudge the dough into place. Fix any tears with your fingers.

With another piece of foil, cover the dough, including on the pan’s edges. Gently press the foil into the shape of the pan. Pour the beans or pie weights into the foil liner. Move it into the oven, and bake for 12-15 minutes, until the dough is turning golden.

Remove the pie pan from the oven. Lift the foil off the crust, and let it rest while you slice the fruit. The beans can be used again for pie crusts but not for cooking.

Fill the pie with fruit from one of the recipes below. Remove the second disk of dough from the refrigerator and follow the dough-rolling directions above. Cover the fruit with the second circle of dough, which will be the top crust. Press the top crust into the bottom crust to seal them. Cut slits in a couple of places in the top crust.

Peel, core and slice the apples thin. Place them in a large mixing bowl. Add the remaining ingredients. With a wooden or silicone spoon utensil, gently mix them until well combined. Spoon the apple mixture into the crust-lined pie pan. Cover the apples with the top crust. Bake for 1 hour, or until the crust is golden brown.
Cool for 15 minutes or more before serving.

Rinse the berries under cold water. Lay them out on paper towels to dry.

Hull the strawberries, and cut them into halves or quarters, if they are large.

Place all the berries in a large mixing bowl. Add the remaining ingredients. With a wooden or silicone spoon utensil, gently mix them until well combined. Spoon the berry mixture into the crust-lined pie pan. Cover the berries with the top crust. Bake for 1 hour, or until the crust is golden brown.

Cool for 15 minutes or more before serving.

Peel the ginger. Dice it and then chop it finely.

Place the ginger and peaches in a large mixing bowl. Add the remaining ingredients. With a wooden or silicone spoon utensil, gently mix ingredients until well combined. Spoon the mixture into the crust-lined pie pan. Cover the peaches with the top crust. Bake for 1 hour, or until the crust is golden brown.

Cool for 15 minutes or more before serving. PJC

Linda Morel writes for the Jewish Exponent, an affiliated publication where this first appeared.