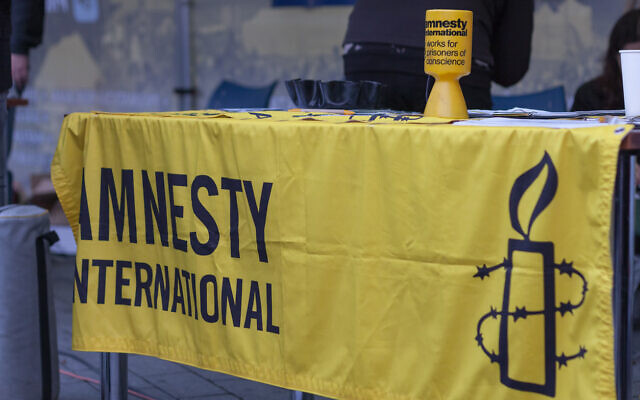 (Photo by PatrikSlezak via iStock Photo)

WASHINGTON (JTA) — An Amnesty International official said that the organization is opposed to Israel continuing to exist as a Jewish state.

“We are opposed to the idea — and this, I think, is an existential part of the debate — that Israel should be preserved as a state for the Jewish people,” Paul O’Brien, the human rights monitor’s U.S. director, said in a luncheon this week with the Women’s National Democratic Club in Washington D.C.

O’Brien said late Friday on Twitter that his remarks had been removed from context, although he did not contest the quotes themselves.

“Jewish Insider’s headline claims that I and Amnesty questioned the right of Israel to exist,” he said. “I did not and Amnesty takes no position on the legitimacy of any state.”

O’Brien also said on Twitter that “I said that while we recognize the right of self-determination for Jewish and Palestinian people as a basic human right, we take no position on the legal or political solutions that any people may take to exercise that right.”

Taking a position on whether and how an established state should continue to exist is unusual for organizations with responsibilities limited to monitoring compliance with international laws governing freedoms and human rights. O’Brien’s comments immediately drew a torrent of condemnation from Jewish groups.

“If there was any doubt about Amnesty’s credibility as a legitimate voice of authority, it is now abundantly clear that they are firmly entrenched in the cadre of extremist anti-Israel provocateurs,” William Daroff, the CEO of the Conference of Presidents of Major American Jewish Organizations, said Friday in an interview, Earlier he had tweeted that O’Brien’s remarks were outrageous. “It is clear that their true vision is a Middle East without Israel as a Jewish state.”

Jonathan Greenblatt, the CEO of the Anti-Defamation League, called on O’Brien to apologize to Jews.

“Your obsessive, relentless focus on Israel, and the erasure of the Jewish right to self-determination illustrates a dangerous degree of bias,” he tweeted.

O’Brien also said at the event covered by Jewish Insider that he did not believe polls that showed the vast majority of American Jews back Israel.

“I believe my gut tells me that what Jewish people in this country want is to know that there’s a sanctuary that is a safe and sustainable place that the Jews, the Jewish people can call home,” he said, apparently referring to a theory advanced by a small cadre of intellectuals that imagines a binational Jewish-Palestinian state that would act as a safe haven for Jews.

In his Twitter comments, O’Brien cited a poll that last year that showed a substantial minority of American Jews believe Israel “is an Apartheid state.” That poll also showed overwhelming majority support for Israel’s existence.
Jewish groups, including groups that are often critical of Israel, were especially offended by O’Brien’s assumptions about what Jews think.

“Polling shows the vast majority of American Jews, like J Street, support Israel’s future as a democratic state and homeland for the Jewish people,” J Street, the liberal Jewish Middle East policy group said on Twitter. “Amnesty USA would be well-served to stick to its expertise in human rights + international law — and not try to assess Jewish public opinion.”

Americans for Peace Now praised Amnesty’s human rights advocacy, but also advised the group to stay within the normative bounds of a human rights watchdog.

“Amnesty International plays an important role in documenting human rights violations worldwide, not in interpreting public opinion or in prescribing the collective conversation within America’s Jewish community,” Ori Nir, the group’s spokesman, said in an email.

O’Brien’s remarks appear to signal a shift. In a controversial report in January accusing Israel of practicing apartheid in the West Bank, Amnesty was careful to remove passages before publication that would have suggested that Israel itself was an apartheid state. PJC