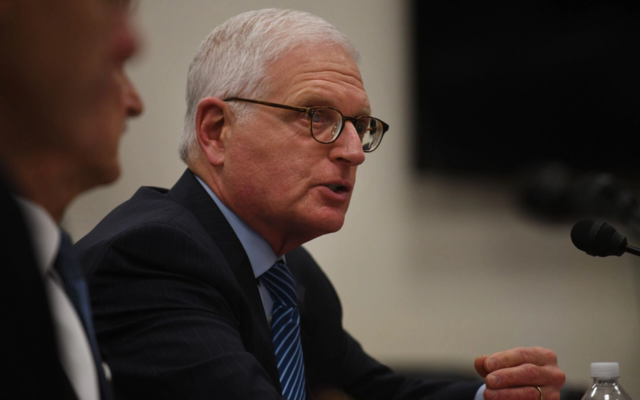 WASHINGTON (JTA) — In response to criticism of its first slate of political action committee endorsements, the AIPAC lobby told its activists that it would continue to cultivate politicians of all stripes, even those who questioned the most recent presidential election based on false claims, citing what it calls deadly threats faced by Israel.

“We have friends who are pro-choice and pro-life, those who are liberal on immigration and those who want to tighten our borders, and yes, those who disagree strongly on issues surrounding the 2020 presidential election,” said the message AIPAC sent on Friday, a day after a Jewish Telegraphic Agency story on the lobby’s support of Democrats who voted “yes” on the Iran deal, one of the group’s most reviled foreign policy developments.

The letter was signed by Betsy Berns Korn, AIPAC’s president, and Howard Kohr, AIPAC’s CEO. It was first reported by Jewish Insider.

AIPAC launched its first-ever PAC in December and earlier this month unveiled its first 120 endorsees, including 37 Republicans who refused to affirm Joe Biden’s election on Jan. 6, 2021. Their votes came after insurrectionists embracing the same false theories led a deadly riot at the Capitol. Their inclusion on the AIPAC endorsement list spurred sharp criticism from pro-Israel Democrats.

“This is no moment for the pro-Israel movement to become selective about its friends,” Friday’s message added. “Israel faces nuclear threats from Iran’s rulers and terror tunnels built by Hezbollah and Hamas. An international movement seeking to isolate and demonize the Jewish state continues to make inroads, especially here in the United States.”

But also on the endorsement list are 27 Democrats who voted “yes” to approve the Iran deal in 2015, an inclusion that has raised eyebrows among longtime Republican AIPAC supporters. The deal, currently being renegotiated to allow for the United States’ reentry into the agreement, trades sanctions relief for a rollback of Iran’s nuclear activity. Israel’s government argues that the accord is too light on Iran and enables their sponsorship of terrorism in the Middle East.

“What are the stakes? Ask President Zelensky,” the message said. “His nation faces a war of extinction — a war which will determine whether his nation exists in the coming months. PJC